Book review
Where Children Sleep
Our childhood bedrooms are central to defining who we are. This new book—consisting of 56 diptychs from around the world—shows us the stark inequalities but also deep universals shared by children in every corner of the globe.
Photographs by James Mollison
View Images

Where Children Sleep
Our childhood bedrooms are central to defining who we are. This new book—consisting of 56 diptychs from around the world—shows us the stark inequalities but also deep universals shared by children in every corner of the globe.

“Where Children Sleep” is a series that captures the lives and situations of diverse children around the world—told through individual portraits and environmental pictures of their bedrooms.

The idea for the project arose when photographer James Mollison decided to engage with the subject of children’s rights. From the start, Mollison was determined to avoid the clichés of “needy children in the developing world.” Instead, he created something inclusive, showing children in all types of situations. His project tackles a difficult topic in an accessible way that is engaging for young and old alike.

To find the right approach, Mollison reflected back on his youth and searched for what had been significant to his own identity growing up. He quickly zeroed in on the centrality of the bedroom: a single, contained space, one that any person who grew up with a home could relate to. Once he settled on a concept, Mollison developed a consistent and visually engaging lens with which to “address some of the complex situations and social issues affecting children everywhere.”

The work, shot largely with a 4 x 5 camera, was intimate to produce. As Mollison told us, “I saw some very upsetting situations while doing this project. When in the process of making the images, I was able to concentrate on the technical decisions I needed to make in order to realize a successful picture…but the moments of sadness came while doing the interviews afterwards or in the evening, when I could reflect on what I’d seen.”

Still, the final results do not feel weighted down; rather, they look at our world’s widely divergent realities with the steady, uncomplicated gaze of youth. Mollison’s subjects, for one, have responded. Everywhere he goes, he makes sure to bring pictures to show potential portrait sitters. And what he finds is encouraging: “Wherever I am, I discover that children are often enthralled to see how other children live around the world.”

Editors’ note: “Where Children Sleep” was selected as a finalist for the W. Eugene Smith Memorial Fund grant. Also, the project was turned into a beautiful book: 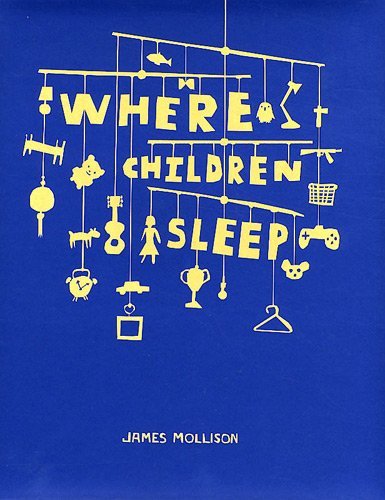 Alex, 9, Rio de Janeiro, Brazil. Alex does not go to school but spends his time begging on the city streets. Most of the time he sleeps outside, on an empty bench or discarded sofa if he can find one—otherwise on the pavement. © James Mollison
Kaya, 4, Tokyo, Japan. Kaya’s bedroom is lined from floor to ceiling with clothes and dolls. Kaya’s mother makes all Kaya’s dresses—she usually makes three in a month. © James Mollison
Lamine, 12, Bounkiling Village, Senegal. Lamine is a pupil at the Bounkiling village Koranic school, where no girls are allowed. At 6 every morning, the boys begin work on the school farm. © James Mollison
Rhiannon, 14, Darvel, Scotland. Rhiannon has had a Mohawk haircut like her parents' since she was 6. She and her family and friends are part of the punk subculture and have formed a supportive community where they all look out for each other. © James Mollison
Bilal, 6, Wadi Abu Hindi, The West Bank. Bilal and his family are Bedouin Arabs. Their home is a one-roomed shack they built themselves in Wadi Abu Hindi on the West Bank. © James Mollison
Erlen, 14, Rio de Janeiro, Brazil. Erlen slept on the floor of her favela abode in Rio de Janeiro until the late stages of her pregnancy. © James Mollison
Tristan, 7, New York, USA. Tristan lives with his father, a filmmaker, and his mother, a pop culture writer, in Manhattan, New York. He attends an Eco-School where no religious holidays are observed. His favorite food is bacon and he has pizza every weekend. When he grows up, he wants to become a creator of marmalade. © James Mollison
Jyoti, 14, Makwanpur, Nepal. Jyoti left school at a young age in order to become a domestic worker, but was treated so badly she ran away and now lives with one of her sisters in the Nepalese countryside where she works in the fields. The family sleeps on mats on the mud floor with an open fire for cooking and warmth. © James Mollison
Joey, 11, Kentucky, USA. Joey regularly accompanies his father on hunts. He owns two shotguns and a crossbow and made his first kill—a deer—at the age of 7. "Even his teddy bear was camouflaged," photographer James Mollison noted in a telephone interview. © James Mollison
Nantio, 15, Lisamis, Northern Kenya. Nantio is a member of the Rendille tribe. She has two brothers and two sisters. Her home in Lisamis, northern Kenya, is a tent-like dome made from cattle hide and plastic, with little room to stand. © James Mollison