Book review
#nyc
A sharp new take on ‘street’ photography, Jeff Mermelstein’s new book captures the dazzling highs and lows of everyday life in New York through the phone screens of its citizens.

#nyc
A sharp new take on ‘street’ photography, Jeff Mermelstein’s new book captures the dazzling highs and lows of everyday life in New York through the phone screens of its citizens.

According to his biographer Lawrence Bergreen, the American writer James Agee was fascinated with the discarded letters he would find when rummaging through bins in Cambridge, Massachusetts, when a student at Harvard. The letters taught him about the value of a direct, forthright and honest writing, bereft of the show of technique. That was in 1930. Nowadays bins have few—if any—letters. There are easier and more efficient modes of messaging.

Texting by phone constitutes our new vernacular. This annotated and abbreviated language is the subject of Jeff Mermelstein’s photobook #nyc. He gives us a contemporary urban portrait through a series of photographs of the text messages displayed on the screens of mobile phones. All of the photographs were themselves taken at very close range with an iPhone, which Mermelstein has been shooting with exclusively since 2016, after decades of using a Leica. The title of the book also bears the mark of this new form of communication: #nyc comes from his Instagram feed, where some of his phone texts were initially posted.

At once detached and intimate, we are offered a collection of fragmentary texts that register the daily life events and feelings of a city’s occupants, a raw vox pop assortment of broken and interrupted and incomplete messages. We watch users reading, texting and even editing on their phones. There are texts about break ups, declarations of love, dreams, lusts, illnesses, affairs, abortion, pregnancy, death, sexual proclivities, money, as well as recipes, cooking, dirty shower curtains and roach traps. Some messages remain unfathomable and enigmatic: “The nun said, ‘That’s OK…”

Washed in blue, in allusion to the light of the phone, the messages are sufficiently transformed as pictures, pulled away from the merely descriptive. Capturing and pausing the flurry of texts, opens up spaces for reflection, seeing in the most throwaway of exchanges a certain poetic and aesthetic value. The briefest of text exchanges becomes a contemporary love poem: “Hey, Hey there, Hi, How are you?, I’m ok, And you, I’m okay too, I Miss you, I know me too.”

While the phones are fairly uniform and standardized, pictures include the fingers and nails of their users, the occasional strands of hair, a cigarette. It is a technology that is very much entangled in our lives. And bizarrely, texts now seem to be preferred to speech, even for the most intensely personal news, such as: “We are having a baby.”

Technology dates and these pictures will accrue value and interest as a document of a particular time and people’s habits of communicating. Mobile phones impact on behaviour in the street, a distraction that allows people to cut themselves off from each other. It is because these texters are so oblivious to those around them that Mermelstein is able to take the pictures he does. In one-to-one exchanges, the overriding content and concern is personal, very few messages address broader political contexts and issues.

One message makes a critical point about documentary photography. The texter is appalled that “This bitch on the street just took a shit ton of photos of a homeless guy and his dog sleeping sprawled on the sidewalk talking to her friends about how raw and beautiful and devastating NY is.” Nowadays, people are, as this text reveals, much more aware of what it means to take another’s photograph. The text is of course laden with irony, written and sent oblivious to Mermelstein’s eavesdropping.

For his previous book Hardened, the speed, ease and relative invisibility of the iPhone camera had allowed him to push the conventions of street photography towards more startlingly vivid and abrasive intensities. Reflective and quieter, #nyc opens up other possibilities for street photography or rather takes it somewhere else. Turning away from images of the street, its spectacle and theatre, and going in close to show us other people’s phone messages, Mermelstein reveals the incredible richness of ordinary human life experiences. His book shows a subjective outpouring facilitated and shaped by technology, defining and documenting what is very much a contemporary moment. 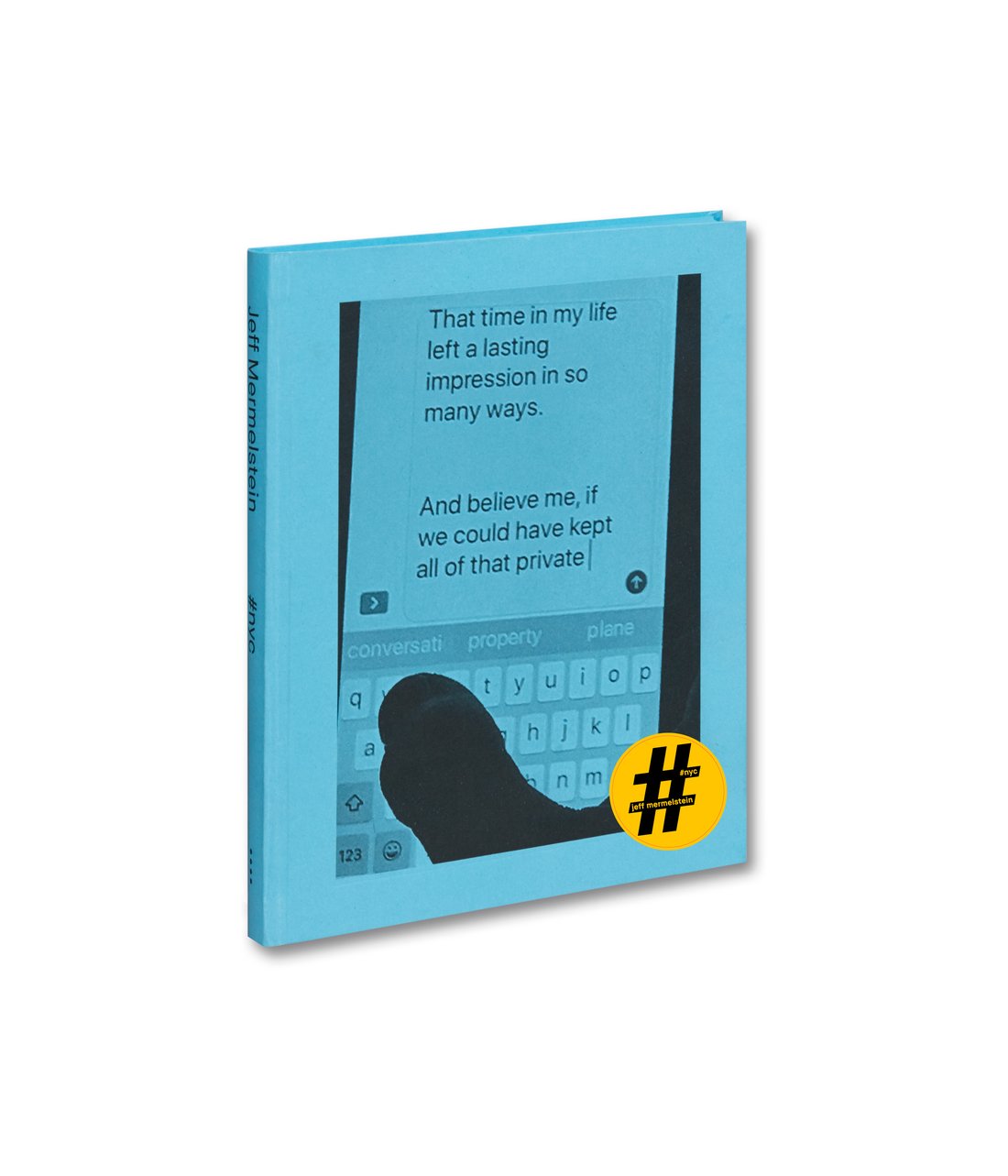