Interview
Meanwhile Across the Mountain
An intimate, 6-year project documenting the kaleidoscopic worlds which define the Caucasus. Often beginning in the streets, the camera involves the photographer into situations far beyond anything he could have imagined.

Meanwhile Across the Mountain
An intimate, 6-year project documenting the kaleidoscopic worlds which define the Caucasus. Often beginning in the streets, the camera involves the photographer into situations far beyond anything he could have imagined. 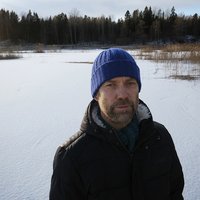 Jens Olof Lasthein is a multi-award-winning photographer who is well-known for his compelling reportages, specifically those focusing on the socio-political transformations in eastern Europe and Asia.

Using a peculiar, wide-angle panoramic view, he sensitively told the story of the people in the Republic of Abkhazia, in the Southern Caucasus, a project which won him the Leica Oscar Barnack Award in 2010.

In the following interview, Lasthein tells us more about what drew him towards photography and his panoramic views of the world and about what connected him so deeply to Caucasus, a region he spent nearly six years covering.

LC: Tell us more about your story: how did you first pick up a camera?

JL: As a child, I was drawing and painting endlessly, and early on I was given a camera as well. The drawings gave air to my fantasies and with the camera, I was simply depicting what was around me. It was not until later, when I understood the possibilities of combining my imagination with reality, that photography really caught me.

LC: When did you start documenting stories in the Caucasus and what were the reasons that drew you there?

JL: I started in 2009 by going to Abkhazia. The simple reason was that I had been curious about the area for many years. The intrigue probably came from the first time I encountered the odd name, “Caucasus.” I can remember when I saw the dark brown area stretching between two oceans on a school atlas as a boy.

More recently, my impetus for going was that it became a logical continuation of my two first books, Moments in Between about the Yugoslav wars and White Sea Black Sea about the borderland between eastern and western Europe. The Caucasus served as a complex borderland troubled by several unresolved conflicts, making it an important next step for my work.

After the first trip, my project grew and expanded both north and south of the mountain range. It would take six years of work before I decided I was done.

As a photographer, I have found the energy which enables me to reach a certain kind of magic is only achieved when I work in an area where I feel a resonance. The Caucasus became such a place for me, which is ultimately the reason why I kept returning for so long.

LC: Is there a picture from the project about Caucasus that has a strong personal significance to you?

JL: I don’t have one specific photograph which sums up all the impressions I had over six years. But the work of sequencing the photographs for the coming book has helped me concentrate on painting a bigger picture with as many details as possible. It’s helped me think about how to drag the viewer into this kaleidoscopic world of different languages, cultures, landscapes and religions—once a coherent southern Soviet region, now broken into pieces after the fall of the Soviet Union.

I have been focusing on everyday life, which is influenced both by animosities and suspicions across the borders, but also by what is shared—and unifying—about the region’s history. For an outsider, this all presents a paradox; for the locals, this is just the way it is. Being an outsider, I was personally very attracted to this complexity.

LC: What is your editing process like, especially when working through six years of material?

JL: It is very time-consuming! For me, photographing is purely intuitive, but selecting pictures which are strong and complicated enough to stay credible—even after seeing them over and over again—is much harder. In addition, my selections have to encompass an emotion which I see as true and consistent with my impressions. Pictures wander in and out of the selection, which expands and shrinks over time. The bigger project, the more the agony. Not easy work!

Time is a great helper. The longer the distance between the moment of photographing and the final selection, the easier it becomes for me. But it is not always that simple. New pictures may evoke feelings connected to older, already discarded pictures and drag them into the game again…I have a few individuals whom I trust to discuss my selections with—that helps a lot.

Still, after spending six years in the Caucasus, I could have produced several entirely distinct books from everything that I shot. I settled for a final edit of approximately 90 pictures.

LC: All of your photographs are characterized by your distinctive panoramic view. Can you explain your attraction to this point of view?

JL: It came very naturally to me when I tried my first panoramic camera back in 1992: it was like finding my eyes.

I had always preferred wide-angle lenses, wanting all I saw to come together in the picture. When discovering the panoramic format, this desire reached a new level. Using that camera, I can stand in the middle of a situation and still get everything into the frame.

The choice of format also has to do with the possibility of combining several—possibly contradictory—elements in one picture. It has to do with credibility as well; after all, life is not simple and one-eyed, so I don’t want my pictures to be read too easily.

Finally, the format enables me to talk about the stage on which the play I photograph takes place. That is how I see the world, in short.

LC: When we first reached out to you about being included as part of a feature on street photography, you said “I’m not much for the hit-and-run or humorous-anecdote type of street photography.” But then you went on to say, “Yet I appreciate being part of the book Street Photography Now by Stephen McLaren and Sophie Howarth—I think it opens up to different interpretations of the concept.” Can you say more about your style and how it relates to street photography?

JL: First, I try to avoid the word “style,” as I find that it can be quite limiting in the work process. In my mind, that word mostly deals with the surface of a picture, its formal outfit, so to speak.

What I do is simply following the tradition of documentary photography: exploiting the surrounding world to investigate and interpret some thoughts or feelings which puzzle me. When I start a project, I don’t know what I’m looking for—that’s the adventure of it. That also means I am dependent on getting impressions from the outside to keep things moving inside. With luck, this process opens up the flow of an expression that mirrors the clash between reality and my imagination.

I am aware, though, that I am a slow runner, developing at the pace of a tortoise, and that there is a quite obvious line from my early pictures to what I do today. Still, I don’t call it a style. I simply try to follow my heart and intuition when photographing and to be as open-minded as I possibly can.

Of course, what limits my view and shapes my pictures to the form that they finally take is very hard to put words on. Clearly there is something going on inside as I look out onto the world—I suppose it is the concentration and accumulations of experience I’ve had in my life until now.

Now, about street photography. For me, the term simply means that I start out by working in the streets. Occasionally, I can be so lucky as to catch something in an instant, but mostly I need more time with my subjects. I have learned that only through getting to know people really well am I able to put myself in the most unpredictable situations. These surroundings then evolve and become circumstances that take me much farther than I could ever have imagined. Searching for these moments is very much what drives me.

Returning to Street Photography Now, the book presents a broad variety of photographers working in the street as their starting point (as I sometimes do). In my case, the result leads to very different and highly personal work, but it also shows how the street is a rich basis from which to begin many investigations.

LC: And finally, a classic: what is one tip that you would give to aspiring photographers?

JL: Trust yourself and your immediate feelings and emotions—your intuition. As simple as that. When photographing, never ask yourself why a specific person or light or situation attracts you, just throw yourself into it.

Afterwards, when looking at the pictures, there will be plenty of time to analyze why you chose just that or if you succeeded in making the right pictures out of it.

Editor’s Note: Lasthein’s fourth book, Meanwhile Across the Mountain was published in January 2017 by the Swedish publisher Max Ström. Don’t miss it!