Interview
Celebrating Photographic Garbage
Berlin-based critic and conceptual artist Joachim Schmid collects and re-uses photographs that other people throw away. Appropriating these discarded, ripped, and mundane photographs, he creates artwork that is alluring, intriguing, and captivating. He speaks about his passion for visual trash,...

Celebrating Photographic Garbage
Berlin-based critic and conceptual artist Joachim Schmid collects and re-uses photographs that other people throw away. Appropriating these discarded, ripped, and mundane photographs, he creates artwork that is alluring, intriguing, and captivating. He speaks about his passion for visual trash, in a great, exclusive audio interview. 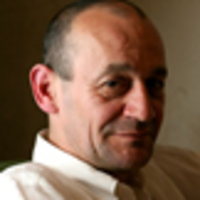 To say that Joachim Schmid is completely obsessed with photography is a fair and accurate statement. He himself suspects that “few people in the world have looked at more photographs” than he has. At one point he counted: he had looked at 10,000 photographs in one day alone. And he has maintained his manic pace since embarking on his career as a “professional looker” in the 1980s.

Using other people’s (often mundane) photographs, he creates artwork that is alluring, intriguing, and captivating. He revels in photographs that other people lose or throw away in public, especially if they seem to have been discarded with some animosity or intense feeling. He is very much a modern day anthropologist who tries to understand contemporary cultures by studying its visual garbage.

He started one project, Pictures from the Street, (Bilder von der Straße, in German), in the early 1980s and it continues today. For this one, he keeps and classifies each and every photograph — or fragment of a photograph — he finds in a public space. (The collection has more than 900 specimens at present.) If a photograph has been ripped to pieces, he re-assembles what he can and mounts it as a scientist would. All pieces of this collection are arranged and displayed on identical sheets of archival paper, in chronological order, noting the date and place where each was found. It is impossible to look at this collection and not try to imagine stories about who is pictured, and who owned the photo, and why the photos were thrown away.

Another ingenious art project came out of a prank he started by posting what looked like a serious notice in a public newspaper about the ecological dangers of unwanted photographs and negatives. He had created an “institute” that offered to safely recycle or re-use dangerous film and photos. The Institute for the Reprocessing of Used Photographs became publicized worldwide, by chance, and Schmid was inundated with parcels of photos and negatives that people wanted to dispose of, safely.

In one series of parcels, he discovered decades of medium format negatives from a professional photo studio! The trouble was, they were all sliced in half, in an effort to destroy their value. What Schmid discovered, happily, was that he could shuffle the left half of a negative with the right half of another negative to come up with bizarre composites that were uniformly lit and fit together in an uncanny way. It seems the photo studio always positioned its lights exactly the same way for years, and never moved the camera closer or further away from each model!

Today he is fascinated by trolling photo-sharing websites like Flickr. “For the first time in the history of photography,” Schmid explains, “we can study the real-time production of snapshot making – globally!”

One trend that started only with the widespread use of digital cameras is that people everywhere are taking pictures of what they are about to eat, while it sits on a dinner plate in front of them — “People are doing it everywhere in the world now!”

Be sure to look at the spectacular book by Photoworks and Steidl called Joachim Schmid Photoworks 1982-2007. It’s filled with superb reproductions of bizarre photography-based art, plus several thought-provoking essays. Joan Fontcuberta writes that Schmid’s work “has its origins in the idea that excess, waste and rubbish are paradigmatic effects of late capitalism. His projects espouse a kind of photographic ecology, but they are also concerned with the values of the creative experience itself: accumulation, chance, authorship, quality and originality.”

Listen to a great 11-1/2 minute audio recording of Joachim Schmid talking about these projects, the ideas of ownership and authorship, and more in an exclusive interview with Lens Culture.