Interview
Verses from a Nation in Transition: Conflict and Family in Ukraine
Two poetic documentary series transcend the churn of the news cycle and offer a timeless look at life and love in this embattled country.
Photographs and text by Joseph Sywenkyj
View Images

Verses from a Nation in Transition: Conflict and Family in Ukraine
Two poetic documentary series transcend the churn of the news cycle and offer a timeless look at life and love in this embattled country. 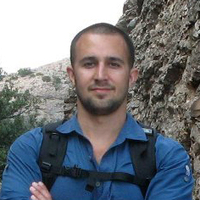 During his life, W. Eugene Smith was a pioneer of documentary photography. He dedicated his time, energy and passion trying to capture important events in pictures with the hope that these images could move people to feel something—perhaps, even, to act.

In memory of his life’s work, the W. Eugene Smith Memorial Fund awards a $30,000 grant each year to someone whose photographs embody the humanistic spirit of Smith himself. The 2014 award was granted to Joseph Sywenkyj for his work in Ukraine. His winning project, titled “Verses from a Nation in Transition” presented two interrelated subjects: the revolution in Ukraine as well as the complex echoes that one finds within the Ukrainian families who have been living there. In the words of Sywenkyj:

It is my belief that photographs are visual poems. Not all poems are alike. Some poems are a labor of love while others are recited on the spot. My work on a family in Odesa differentiates from my work on the revolution for this simple reason. One represents the formalities of domestic life, while my images from the revolution are more immediate, which is the reason I made them in 35mm.

In the Ukrainian capital Kyiv (Kiev), a peaceful protest movement in favor of closer ties to the European Union turned into an anti-government revolution after security forces violently dispersed hundreds of peaceful protesters in the early morning hours of November 30, 2013. Over a three-month period, the Ukrainian government, led by the now deposed former president Viktor Yanukovych, passed draconian laws essentially outlawing any kind of gatherings and increased the use of brutal tactics against demonstrators. These included kidnappings, torture, murder and violent police crackdowns.

To combat the unrest, the government employed well-armed, specialized police forces. These professional soldiers had a multitude of weapons at their disposal: tear gas, stun grenades that fragment and wound people, rubber bullets, armored vehicles, snipers and Kalashnikovs. They faced demonstrators who had hand-made shields and makeshift weapons like clubs, broken cobblestones, fireworks, and Molotov cocktails.

Over 100 demonstrators were killed, most of them shot by snipers. It is unknown exactly how many demonstrators were wounded during these clashes with the police forces, but the number is likely in the thousands. The Ukrainian protest movement was successful and ushered in an interim pro-European government after Viktor Yanukovych and his corrupt inner circle fled the country. An early presidential election was held in May 2014, in which Petro Poroshenko, a pro-European politician and businessman was elected president.

Verses: A Family in Odessa
This is the story of a family in Odessa, Ukraine. Sasha, Ira, and their daughter Masha are the lead characters in my ongoing documentation. This is not a story of quick change or fast healing. The story progresses slowly, yet captures moments of family life and dynamics that cover a variety of situations and emotions.

Sasha and Ira were both diagnosed HIV-positive in the late 1990s. Several days after I met them in 2001, Ira gave birth to her sixth child Masha. A year later they were informed of Masha’s HIV-positive status. Ira has had 3 more children since Masha’s birth. Currently 11 children (including 3 grandchildren) live with them in their small home. Their children range in age from 4 to 20 years old.

Masha, who turned 13 years old in August, is their only child who is HIV-positive. Watching her grow is not only a testament to her personal strength, but also a way to observe the program that gives her free antiretroviral therapy. In Sasha’s case, his health has fluctuated over the years even though he receives antiretroviral therapy.

This story long ago expanded into a narrative that examines family more than it documents illness. HIV infection was a death sentence not long ago, particularly in emerging economies like Ukraine. That has changed. For those who receive antiretroviral therapy life goes on almost normally.

The Ukrainian Revolution officially ended last year but its reverberations continue to be felt today. What is most striking about Sywenkyj’s photographs is how although they were made over the past decade, they transcend the daily news cycle and feel as relevant today as they were the moment they were made. Assistant editor Alexander Strecker reached out Sywenkyj to find out more about these award-winning photographs and the man behind the camera.

Q: What initially drew you to photography? What keeps you coming back?

I was always involved in the arts growing up: drawing, painting, photography and also various sports. My main focus for many years was on Ukrainian folk and character dance as well as classical ballet.

Injuries caught up with me at the age of 18 while I was studying with the National Dance Academy in Kyiv, Ukraine, where I moved after graduating from a performing arts high school. I was forced to move back to the USA and take a year off to heal. During that time I needed a creative outlet and I picked up a camera. It felt like I had been in a relationship with dance all my life and suddenly something new came along that felt fresh and new. Moving to photography from dance was similar to amicably parting ways with your high school sweetheart when you both go away to college and realize there is another world out there.

Q: Were there any pivotal moments in helping you establish yourself as a professional photographer? Or a moment when you decided, when you felt deep inside: “I need to be a photojournalist.”

There was not one particular image or assignment I shot that kick-started my career. I would describe how I established myself as a photographer as a long, hard walk uphill that I have yet finish and probably never will. Like anything worth doing, photography takes time and effort.

Q: You’ve been going to Ukraine for over a decade now. A lot has happened in that time frame. What has kept you coming back?

I have been drawn to Ukraine, which is the land of my ancestors, for as long as I can remember. I began traveling and working in Ukraine because I wanted to discover the nation my grandparents were forced to leave due to war and Nazi (and then Soviet) occupation. Even if I were not a photographer, I would still find a reason to spend a lot of time here.

Q: In writing about your work, you mention the presence of poetry in the midst of these difficult scenes. Do you think about this consciously as you work? When did you begin to develop this poetic approach?

I do not think about the presence of poetry when I am shooting and I would not describe it necessarily as an approach. It more or less just happens. It is just the way I see the world through my camera. I describe my photographs as poems in part because photographs, or any form of expression, are sometimes made through a labor of love while at other times they are made on the spot in a jolt of inspiration.

Q: Do you ever think that beauty could detract from a documentary series’ ability to affect change/impact the viewer? In other words, if a photograph is too beautiful, perhaps the viewer won’t feel as strongly about the grave issues that are depicted?

Well, if documentary images are too dire and show only hopelessness, then you have the flip side of your question. People might turn away because they will feel powerless to help a situation.

Beauty can take many forms and each person sees beauty in different ways. My photography is not about making beautiful images. My hope is that people have an emotional response to my work. I am not naïve and do not think that photography can change the world, but it is very important that people be informed and understand that there is nuance in every situation. A well-informed photographer willing to dig a little deeper than the daily news image (which also serves a purpose and which I have absolutely nothing against) can help create awareness of different aspects of life in a particular place that many people are not aware of or would normally think about. If there is beauty in my photography it probably comes from my sense of color and from many of the moments that I tend to capture, which show tender interactions between people.

Q: Can you talk a little bit about visual storytelling—do you think of each photograph you take as an individual expression or do you also find ways to tell longer form narratives? How do you balance the qualities of a single image with the needs of a narrative?

I am not necessarily looking to make a traditional narrative story with my photographs, but each photograph needs to be strong enough to stand on its own as an individual image. If it can do that, the photographs can be edited into a story. If the image does not stand on its own, it usually gets thrown out. The balance comes from spending a lot of time with the people I photograph and making sure I have strong images.

Q: What are your thoughts about the internet and contemporary photojournalism? How does the internet add (or subtract) from visual storytelling?

The internet has made great (and bad) photography available to almost everyone, everywhere at any time. It also allows photographers to publish their own work. This is mostly positive, but at times it feels as if the flow of information is so fast, and there are so many photographs out there, that it can be a bit overwhelming.

I feel that it is important to slow down and think about what your photographs mean before posting them instantly after making them. There is a time and place for instantaneous publishing in particular news settings—but this speed is not necessary most of the time.

Editor’s Note: To find out more about the W. Eugene Smith Memorial Fund, be sure to visit the organization’s website.