While visiting Photo London 2015, the otherworldly “poolscapes” of photographer Karine Laval caught our eye. Her vibrant but enigmatic work prompted managing editor Alexander Strecker to reach out by email. Here is an edited transcript of their exchange. 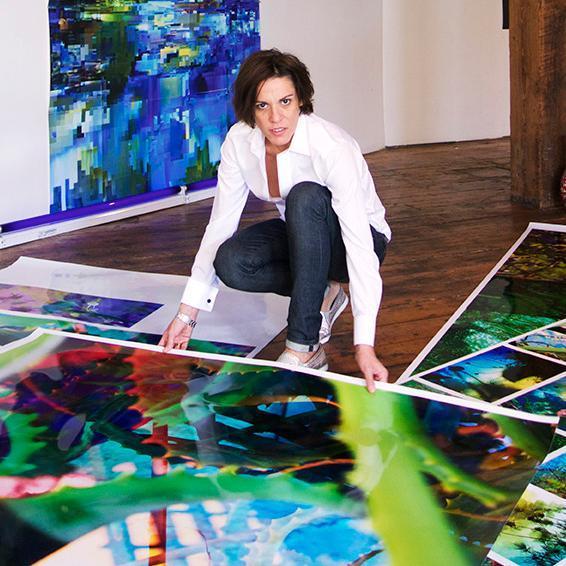 LC: How did you begin making the pictures in Poolscapes? Were there any particular inspirations behind the work? An “a-ha!” moment perhaps?

KL: Poolscapes came as a natural follow-up to The Pool, for which I traveled throughout Europe photographing outdoor public swimming pools from 2002 to 2006. Although I was living in the United States for years, most of my projects were inspired by my extensive travels in Europe, North Africa, Asia or the Caribbean. It was almost as if I resisted the idea of fully living and working in the United States and I tried to maintain a link with my roots and personal history/memory.

There is something very special about electing a foreign country as your new home and leaving behind the place where you were born and grew up, a feeling of belonging neither here nor there. In a way, that is a liberating place to be, as it allows for more distance and openness, and a refreshed perspective on the different places one visits and lives in. However, after some years I started to question the fact that I was always drawn “elsewhere” and had never focused on a personal project in the US.

So, during the summer of 2009 I took a break from work and life in New York and visited a friend of mine in the Dominican Republic. While spending days and evenings by my friend’s pool, I began to be fascinated by the liquid landscapes appearing and quickly fading away like shimmering evanescent dreams, as the sun and clouds followed their course. Although I had decided to take a break from photographing that summer, I started to capture these ephemeral vistas, which seemed to echo shifting states of mind. This was the starting point of the Poolscapes pictures.

The first Pool series was in part a way to revisit memories from my childhood and there was also a sociological aspect to the work. This is absent from the Poolscapes series. In the latter, I’m more interested in the pool as a mental and psychological space that reveals and conceals at the same time. I see the pool more as a metaphor, a mirror whose surface reflects the surrounding world but is also a gate into another dream-like world, a sort of mise en abyme.

LC: It seems that you’re often drawn to water in your work—any thoughts on that tendency?

KL: I’ve always had a strong and natural connection to water, particularly open waters such as the sea and ocean. I find water appeasing, meditative, and exhilarating. It speaks to the senses and it’s a vehicle for transformation and self-reflection. It’s also vital to the survival of the planet and our species, and can be a deadly force, as we’re appreciating more and more in studying the impacts of climate change. I’m interested in all of these aspects of water, from the more intimate and symbolic to the social and economic.

Like images, swimming pools can be layered with ambiguous connotations. They can be a stage for mundane activities but also an arena for anxiety, drama, and tragedy, which has been explored and exploited in literature and movies ( The Great Gatsby, Cheever’s short story The Swimmer, the film The Graduate, and more recently Ozon’s Swimming Pool).

More recently, water has shifted from being primarily a subject matter to the substance or tool I use to create the work. I employ it as a distorting lens and a revealer of transformed reality. In this sense, the element becomes almost a metaphor for the medium of photography itself.

LC: Many of your photographs are so dreamy and colorful—a long way from the “realism” that photography supposedly conveys. Do you still consider yourself a “photographer?”

KL: I’ve always had an issue with labels and categorizations. Although some of my earlier images convey a form of realism, these images can’t be seen as pure representation of reality due to the choice I made of the color palette (the result of chemical and darkroom manipulations), and my use of scale distortions and fragmentation. I am more interested in photography’s abilities to explore the imagination and subconscious, using color, form and light to create images that often flirt on the edge of representation and abstraction.

Over the past few years, I have been increasingly interested in the process of image making—as opposed to image taking—and its relationship to surface, texture, and materiality. It allows me to experiment freely and to welcome mistakes outside of the medium’s regular conventions. I’m also fascinated by the ability of photography (and lens-based mediums in general) to create illusion and question our sense of perception. In that sense, I don’t consider myself a photographer. I think of myself as an artist that uses the medium of photography, as well as the mediums of film and video, and sometimes sound and music.

LC: Is there something special about photography, though, that keeps you coming back? What does it offer you that other mediums don’t?

KL: One of the key characteristics of photography that keeps me interested is the possibility for experimentation, whether I use film or digital technologies. I enjoy playing with the dichotomy inherent to the medium; where precision and the technical aspects can be played down or overridden by accidents and randomness. As a matter of fact, I often break the rules in the process of creating my images: while shooting, processing the film and exposing the paper in the darkroom, or by using the wrong parameters while using digital equipment.

The camera is only a starting point for me; the process of creating the final image or work is sometimes slow and can even take years. This is a paradox I find very compelling: the instantaneity and illusion of truthfulness versus the transformative power of the medium through time-based processes. I also like the fact that photography is relatively easy to use as opposed to painting or sculpture, which require pigments, canvases, or a studio. With photography I feel the world is my studio, be it the natural world, the urban environment or the intimacy of interiors. I also feel there is more room for serendipity to occur.

LC: You write about how your transition to digital work has opened you up further to abstraction and deconstruction. Can you talk about that more?

KL: I have explored the tension between figuration and abstraction for a while now. It started with the use of water as a distorting lens, shifting the natural colors captured on film through a chemical process and in-darkroom manipulations, and later using Mylar and other reflective surfaces that echoed the distortive qualities of water.

My work has certainly evolved as a result of the inevitable confrontation with digital technologies—some frustration, at times, but also the renewed possibilities it offers. In particular, the new technologies have allowed me to further investigate the dissolution of the image and its fragmentation.

I think my move towards further abstraction can be seen as a response to the fluidity and dematerialization of our contemporary existence. Most of what we experience or communicate these days is mediated and therefore transformed. Everything is in constant states of flux. This state of being can create a sense of chaos and confusion, or a kaleidoscopic and polyphonic perception of our lives. Well, I could go on—but I think this would require a whole other interview!