Book review
Office Romance: Loving Light at the New York Times Building
Kathy Ryan, the longtime director of photography at the New York Times Magazine is also a first-time published photographer: in this book, she offers us a simple yet elegant ode to light, to beautiful interiors and to her inspiringly designed work space.
Photographs by Kathy Ryan
View Images

At first glance, Kathy Ryan’s Office Romance looks more like a young adult novel than a photobook. The title is handwritten in scrawling black font on a white marbled hardback, a façade that woos us with its unexpected sincerity. You feel that you are picking up someone’s intimate journal and, in a way, you are. Ryan took photos of her daily work life as the director of photography at The New York Times Magazine for over a year and a half and began posting them on Instagram. The result is a collection that unpretentiously mixes a myriad of genres: still life, portraiture, formal abstraction, and architecture photography.

In the absence of a recognizable genre, the book is sold on Aperture’s website as a “photographic love song” to life in Renzo Piano’s masterpiece, the New York Times Building (completed in 2008), a luminous glass creation that bravely claimed transparency as strength in the years after 9/11. The photos do indeed testify to Piano’s success in bringing in light to the office through enormous windows and reflective surfaces. However, the love motif seems a bit forced; the photos better present their own narrative. This is Ryan’s first photobook and we see her coming-of-age, so to speak, behind the camera. She learns to play with photographic elements: “I don’t feel the need to have one style. It’s part of the fun to play with the visual language the cell phone and Instagram square allow.” Most compellingly, Ryan is clearly taking pleasure in capturing her surroundings.

Light invites poetry, Piano says in his introduction to Office Romance, and Ryan seems to be spinning a poem, which vibrates with the intimate and personal things that speak to her. In the afterword, she says of her photographic trajectory via Instagram, “the light and the likes between them became an intoxicating cocktail.” In this regard, Ryan ceases to be a sharp editorial eye and truly becomes an artist, making work that sings for her.

The appeal of Ryan’s book is in her variations and experimentations. At first, light dominates Ryan’s pictures; she divides her office into lines, triangles, and reflections creating a double image. Even in color photos, she focuses on the duplicity of light and shadow. Then, the subject evolves as she begins to play with the materials of her métier. She stages paper strips, post-its, a paper cutter, and a computer cord in all their glory. In her later photos, texture replaces shadow as the primary concern in her work. She experiments with matte filters that render a still life of a flower or a skyline shot as charcoal or chalk-like. Her oeuvre is a work still in process, but her optimistic attitude toward photography’s future speaks to the strength of her vision. This strength rests in a simplicity that could easily be mistaken for naiveté. Remarking why she uses cell phone and the Instagram square format, she says, “like Polaroids in the past, the format has its particular character and charm, and I find it full of possibilities.” Sometimes the simplest answers are the best. 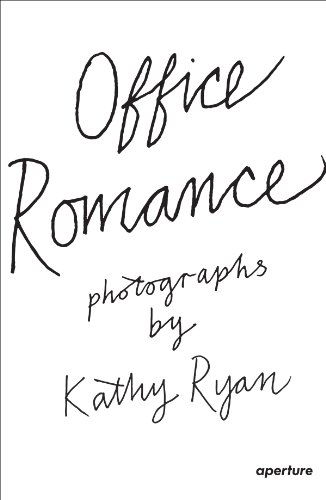