Book review
Silent Histories
This award-winning hand-made book presents an immersive and highly moving collection of “silent histories” of six injured survivors of the bombings of Japan in WWII — visual storytelling and book design at its best.
Photographs by Kazuma Obara
View Images

Silent Histories
This award-winning hand-made book presents an immersive and highly moving collection of &#8220;silent histories&#8221; of six injured survivors of the bombings of Japan in WWII — visual storytelling and book design at its best.

The indiscriminate bombing by U.S.forces during the Pacific War massacred 330,000 and left 430,000 Japanese citizens injured. More than 9.7 million citizens were left homeless as 2.23 million houses were destroyed, and over 200 cities were damaged.

In this enormous catastrophe, a girl lost her left foot at the age of six, and a fire bomb left a baby's foot in flames two hours after her birth. Another boy was burned over his entire body—he survived but lost all six of his family members in a flash and became an extremely disfigured orphan.

Japan brought about its economic recovery in the wake of wartime devastation. Such remarkable growth was even called "Japanese economic miracle." In contrast to the historically lustrous economic growth, children with wounds of war were forced to live a harsh life, unable to cure their wounds.

They have lived in the shadows, trying to hide their scars and avoid causing someone trouble by being invisible, trying hard to cover their pain. This intimate, hand-made book gives voice to their histories which were kept silent for 69 years.

The book includes snapshots, class photos, views of Japanese cities in 1945 and today, as well as Obara's recent portraits of each of the six survivors who tell their personal stories. These stories are interspersed with pull-out replicas of each person's government disability cards (which are essentially worthless, since the victims have never received any compensation from the government, even after seven decades) and replicas of wartime propaganda magazines. It's an immersive and highly moving collection—visual storytelling and book design at its best.

About some special feature of the book

Tweed Cover—it was almost impossible for many victims whose legs were injured by aerial bombing to become employed as full-time workers. So they did sewing work. They could earn money by themselves and could be independent. This work also enabled them to hide from the public and work inside their apartment.

Tipped-On Cover Photo—this only survivor in this family portrait had covered her face on the photo with a square of white paper since it was a photo of deceased people, with everyone in the photo except Ms. Yoshida having passed away. She hid her own face, because she did not die, but she wanted to remember the deceased members of her family.

Replicas of physical disability certificates—the Japanese government has given no apology or compensation for the things the victims lost in the war over the past seventy years. This certificate only provides some discount of public services. In this book, four certificates are inserted.

Old pictures—the author collected more than 130 their personal pictures which were taken from before WWII.

Replica of Propaganda Magazine—between 1938 and 1948, the Japanese government published a propaganda magazine. There were 370 total issues. In this photo book, 3 replica issues are inserted. Among other things, these propaganda magazines show citizens how to protect themselves from aerial bombing.

Edition of 45—this hand-made photobook was made in an edition of 45. Number 45 was derived 1945, the year the Second World War ended. All copies are sold out. However, the author is looking for a publisher to created a second edition that will be widely available.

This book was shortlisted for the 2014 Paris Photo-Aperture Foundation First Photo Book Award.

—LensCulture, with primary notes and comments by Yumi Goto 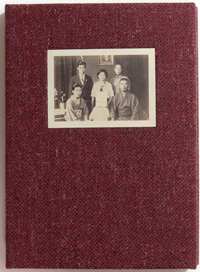