Soul and Soul 1969–1999
The book Soul and Soul, published by Noorderlicht&#8217;s Aurora Borealis, recreates (partly) the original dummy of the book Soul and Soul that was self-published in 1972 by the Japanese photographer, Kiyoshi Suzuki. Suzuki was part of the 60&#8217;s generation of photographers who explored the visual capabilities of the book medium to their extremes.
At first sight, it's an old, dirty book: stained and battered, with an almost greasy feel. But in fact this is not a second-hand book from a garage sale, or bought on eBay. This is a new book, designed and printed with the idea to make it look like this.

Why would a publisher create and publish such an item? Because, more than just a book, we are talking about the book itself as an object of art, something that will become a collector's item.

Dutch photographer Machiel Botman was working on an exhibition of Suzuki's work for Noorderlicht's photo gallery, when he came across the original hand-made mock-up of Soul and Soul in the photographer's garage.

Suzuki was a Japanese photographer, (1943 - 2000), who was very much part of the 60's generation of photographers who explored the visual capabilities of the book medium to their extremes. The way the images appeared on a printed page was what interested Suzuki. For this photographer, the photo book was the ultimate way to show his work, and in order to create the book that he envisioned, he worked on the dummy almost endlessly, until he arrived at what he felt was the best proposition for his work.

This is what Botman and Suzuki's wife found while searching the garage — an old stained, greasy dummy, with notes, annotations, lines drawn with a pencil to indicate the exact size that the book should be. And this is what Aurora Borealis recreated. The result is not an exact reprint of the dummy but it aims to show an overview of Suzuki's work until his death in 2000. It is surely interesting to see the span of Suzuki's work, and to try an discern the development he went through. But it also inevitably means the book stays somewhat on the surface, and does not really go deep into the work.

There is only a small amount of text, not printed in the book, but printed in a small booklet that comes together with the publication. On a design level this is wonderful: a book without text, making it the book as it was initially conceived. Too often texts come in as essential but never really as an integral part of the design. The images therefore work only with each other and don't get distracted by text blocks. On the other hand, a more theoretic overview or interpretation of Suzuki's work and influence could give this work an extra value.

Soul and Soul is a courageous book: the work of Suzuki was without doubt far ahead of its time, and it is a privilege to see a dummy, a work in progress by one of the photographic masters of our time. But because it is presented this way, this is not a photo book for a large public. This is a designer's book for designers, a photographer's book for photographers, and almost an historical document for anyone interested in the history of (Japanese) photography and bookmaking. A must-buy for anyone interested in book-publishing. If you can find it that is: the first edition is sold-out, the second edition almost: you may soon need to look for it on eBay.... 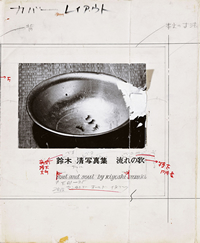