Palm Wine Collectors
In Namibia, a generations-long tradition of tapping the sap of palm trees runs counter to recent environmental protection efforts. Is this an essential cultural practice or merely destructive? These striking portraits investigate.

The first image of this striking and original portrait series was selected as a Single Image Winner in the Magnum Photography Awards 2016. Discover more inspiring work from all 44 of the winners, finalists, jurors’ picks and student spotlights.

I photographed this series of eight portraits in 2015 on my return to the Kunene region of Namibia. I had traveled to the region to talk to participants of the Ovahimba Youth Self-Portrait project. A young Himba man named Wakarerera Tjondu, whom I had met earlier in 2014, led me through the palm groves and proudly introduced me to the palm tapping process for the first time.

The images in this series portray the Himba men who select, prepare and maintain Makalani palms during the sap tapping process. The Himba people from this area have utilized this plant family for generations, passing down the knowledge and technique needed to carry out the process of obtaining the liquid.

To begin the process, the collectors select a well-aged, sizable male palm. Its size and proximity to ground water will determine the amount of sap it produces. The most productive palms secrete over one hundred liters per tap. Once selected, the trunk is then pierced with stakes carved from harder wood. These act as steps upward toward the leaves and flower at the top.

Although the Makalani palm is a protected tree in Namibia and the tapping of palms a banned practice, the Himba firmly believe that it is their right to continue the tradition. They argue against Western law and instead follow ancient cultural traditions that respect these palms through their utilization. In turn, they promote their conservation on a local, cultural level. 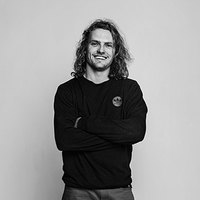 After completing a portrait project in the Kunene region of Namibia, photographer Kyle Weeks returned to the area to revisit the subjects of his series. It was on this subsequent trip that Weeks was introduced to the age-old technique of sap tapping for the first time. This process, passed down through generations, is used to produce a palm wine elixir known locally as “Otusu.” Although officially banned under Namibian law, the sap tapping practice continues to thrive along the palm-lined fringes of the Kunene River today.

“Palm Wine Collectors” captures the deep sense of pride these men radiate while carrying out their work in the treetops. In order to capture the 10-15 meter high palms on camera, Weeks used a wide-angle lens to stretch our field of vision lengthways. This simultaneously raises the drama of each composition. Weeks captures the Himba men posing defiantly as they conquer the trees, actively determined to carry on their tradition in the face of both modernity and the law.

LC: What themes are you drawn to in your overall work as a photographer?

KW: I’d say my interests are rooted in the politics of identity and photographing people, particularly in the way that images have the ability to shape and preserve identity. Over the past years I’ve looked closely at representations of the African body; my work references the historical visual language in order to drive important dialogue on documentary photography and the ethics of representing difference.

LC: What initially attracted you to this region, and how did this project come about?

KW: These images were made in Namibia, along the Kunene River, which forms the natural border between northern Namibia and Angola. I’ve always had a special appreciation for this area, particularly for the unexpected presence of the perennial river that carves its way through the dry land. On the river’s flood plains, the nutrient-rich soil encourages the growth of a dense belt of Makalani palms stretching upstream. During the dry season, many of these semi-nomadic herders settle near the river for access to water. Palm wine consumption is at its peak in these months.

LC: Can you explain to us exactly what the sap-tapping process is? What is its purpose?

KW: The indigenous people (Ovahimba) from this area have utilized this palm species for a long time; the knowledge and technique for obtaining the liquid has passed from generation to generation. To start the process, collectors select a large, well-aged male palm. Its size and proximity to ground water will determine the amount of sap it produces: some palms produce over one hundred liters of liquid. Once selected, the trunk is then pierced with stakes—these stakes then act as steps upward toward the leaves and flower at the top.

In order to attain the sap, the men behead the palm—they cut the crown from the trunk. This sacrificial act will eventually cause the tree to die, but first the white sap rises upward, filling a hollow carved into the trunk. The secreted sap is sweet and alcohol free, but due to naturally occurring yeasts, it quickly ferments and produces an alcoholic drink traditionally known as “Otusu.”

LC: What was it like photographing this forbidden practice? Were you and the palm wine collectors at risk?

KW: No, there wasn’t any risk involved. Although this practice is forbidden, the level of enforcement from local officials is extremely limited. The fact that I had already spent a considerable amount of time in the area definitely helped me gain their trust. Because I returned with prints of the local men from my previous series, they were able to picture themselves in the photographs I was taking. This made them eager to participate.

Although many Ovahimba take an interest in certain aspects of modernity, they still share a strong affinity for cultural practice. They take great pride in the masculine process of preparing the palm and scaling its tall thin trunk to bottle the wine, so they had no objections to being photographed.

LC: Did you get to try any Otusu—did you bring home any bottles?

KW: It tastes like wine that’s been forgotten in the sun…I thought it tasted terrible.

LC: Finally, what is the main message you want to convey in this series?

KW: My approach to long-term portrait projects has always been to collaborate with the people I photograph; I spend time getting to know them before taking their portrait. To empower my subjects, I photograph them in the way they would like to be seen by an outside audience. Usually I let them perform for the camera—I give very little direction and let them experiment with the construction of their own image.

I hope viewers are able to consider my position in making these images, as well as their position as viewers—especially the act of assigning meaning and knowledge to these photographs.