Award winner
UCP-UMCG
Made in a psychiatric hospital, on the verge of suicide, these self-portraits offer a piercing window into the gaping maw of depression, anxiety and loneliness.
Photographs by Laura Hospes
View Images

UCP-UMCG
Made in a psychiatric hospital, on the verge of suicide, these self-portraits offer a piercing window into the gaping maw of depression, anxiety and loneliness.

Laura Hospes is one of the 50 best emerging photographers for 2015, as voted by international jury for the LensCulture Emerging Talent Awards 2015. She was also one of the eight “jurors’ picks.” Here is her winning entry and her artist’s statement. Below, you can also read more about what made her work so special in the eyes of the jury.

I’m portraying myself in a very difficult moment of my life: I’m depressed and suicidal. My self-portraits are a direct reflection of my emotions, which I can’t show in real life. My camera is my consolation and listens to me better than anyone else.

I want to share the difficulties and loneliness I feel right now. I want to let you feel the pain and fear I feel, even if it’s just a fraction. I want you to be with me in my situation so that I feel less alone. 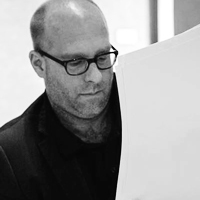 LC: Your work is both performative and so deeply real—did you find a tension between trying to balance these two opposites?

LH: I am aware of the fact that my photographs are both performative and real. This tension has grown over time, especially since I know where it comes from: I worked as a model from when I was 14 until 16 and it was then that I learned to pose. During this time, I learned how to be photogenic but also how to accept my flaws.

This experience really helped me in my process of making self-portraits. I already knew what to do in front of a camera and slowly I learned what to do behind it. Of course, the pictures looked quite superficial at first, but slowly, something started to grow in my pictures. Bit by bit, I felt a need to express my real feelings. And that is how I became the photographer I am today.

LC: When choosing whether to work in color or black-and-white for this series, was it an easy decision to make—were you instantly drawn towards black-and-white?

LH: When I started with photography, I shot everything in color—color was beautiful and happy (or so I thought at the time). Later, I began to experiment with black-and-white and then decided to make the switch full-time. In retrospect, the transition represents my change in focus from the present to the past. I always associate color with the present, the here and now. When I want to represent the past, I must make it black-and-white.

Besides that, I want my photos to be timeless. For me, color makes photos such a modern thing and that is not what these particular pictures are about.

LC: After shooting these images, did you feel hesitant to share them? What allowed you to overcome that doubt? Do you feel that communicating your state of mind had the effect of easing your internal turmoil?

LH: Because of my past in the modelling industry, I didn’t feel any hesitation when I shared my first self-portraits on the internet. In fact, these first pictures were just remakes of old fashion photos I had of myself. No emotions: just posing like I did in front of a fashion photographer.

I thought that if I wanted to be a photographer, I had to photograph other people and make beautiful portraits, instead of rough and raw self-portraits. Thus, the “realer” pictures only manifested themselves slowly. The big transition came during my first year at the photoacademy (in Groningen, Netherlands). I realized I was good at making self-portraits and that these images were able to bring my story to an external audience. Half a year later, I found myself in a psychiatric hospital with my camera and only myself to photograph. At that moment, I realized it was “my thing” to make self-portraits and decided to never photograph anyone else again.

LC: After making a series like this, is it difficult to return to less emotionally fraught topics? How do you go back to making less involved work? Is it a relief (to be done with such a personal topic) or is it difficult (since the other work would make you feel less)?

LH: I don’t decide what I want to make in the future—it just originates with time. In this case, I had no way of predicting how long I would have to stay in the psychiatric hospital. I didn’t even know that I was processing an traumatic event when I began to create the project.

In general, all my projects are processes that I don’t recognize at first. After weeks, or even months, I understand what I’m doing and I’m able to give it a name and more background information.

The only thing I know now is that my intuition will bring me deeper into my process and will create my next works. Maybe there will be a project about recovering from my depression one day. Or about being happy and satisfied. It’s hard to imagine but we’ll see.

LC: Were you previously familiar with Todd Hido’s work? I find a real sympathy between his work and yours—what does his selection of your work mean to you?

LH: No, in fact, I didn’t know his work or even his name! I really live in my own little world, where I oversee and control everything as much as I can. I rarely watch the news or seek new inspirations on the endless internet.

Of course, since the announcement, I searched him on the world wide web and saw his beautiful work. I recognized a little of my own self-portraits in his landscapes. It really opened my eyes that someone could do that without showing a face or a body. I am so, so thankful that he chose me to be a grant winner. To transform from a shy, 16-year-old girl that didn’t believe in making self-portraits to a photographer who receives recognition for her own, deeply personal work is a real honor—especially from such a deeply talented photographer in this big, big world.