The 2006 exhibition at the Jeu de Paume in Paris was the most comprehensive survey to date of the photography of Lee Friedlander (American, b. 1934). Comprised of six early color portraits, 477 black-and-white gelatin silver prints, and 25 examples of Friedlander’s books, special editions, and portfolios, Friedlander traced a prolific career that continues to thrive after half a century.

Supplemented by a modest number of loans from the artist, the retrospective was largely drawn from MoMA’s extensive collection of Friedlander’s work, which published the authoritative restropective book.

There are some 60 groups of photographs, each narrowly tailored by date, theme, and style. Groups that present distilled versions of Friedlander’s books are identified as such. Completing the exhibition are seven vitrines displaying Friedlander’s portfolios and special editions.

Born in 1934 in Aberdeen, Washington, Friedlander fell in love with photography as a teenager. He studied briefly at the Art Center School in Los Angeles in 1952, and in 1955 he moved to the New York City area, where he still lives. For the next fifteen years he worked steadily as a freelance photographer for many magazines, including Sports Illustrated, Holiday, and Seventeen. His other line of work-portraits of musicians for their album covers-grew out of his lifelong love of jazz and other music. Color portraits of John Coltrane, Aretha Franklin, and Miles Davis are among the few examples of Friedlander’s commercial work on display in the exhibition.

Friedlander’s professional work honed his craft, made him a traveler, and introduced him to a widening circle of friends. One friend was Walker Evans, whose work had shown that ordinary America was full of messages from the people. Another was Robert Frank, whose book The Americans, published at the end of the 1950s, extended the robust artistic tradition that Evans had initiated in the 1930s. The book proved that a photographer could step aside from the demands of commercial work to make a fiercely independent, fully realized work of art. The examples of Evans and Frank helped Friedlander to see that photography’s creative potential was not exhausted by the utilitarian aesthetic of magazines.

Friedlander’s personal work burst into maturity in 1962. Like Evans and Frank, he was probing what he called “the American social landscape” — shop fronts, ads, TVs, cars — the whole panoply of the city street. What was new about Friedlander’s work was its playfulness — his talent for turning familiar photographic errors into beguiling puns and puzzles. In his pictures a pole often gets in the way; the frame cuts off something important; a plate-glass window confuses inside and outside; the photographer’s own shadow or reflection intrudes. Friedlander’s eager pursuit of these complications recaptured the creative verve of photographic modernism.

For another photographer, those pesky shadows and reflections might have been a problem, but Friedlander treated them as a gift, coaxing his surrogate self into a chameleon protagonist. Like his friend Garry Winogrand, Friedlander reveled in his medium’s duplicity, simultaneously embracing the ungovernable energy of the city street and gleefully insisting on photography’s power to transform what it describes.

In 1967, the recent work of Friedlander, Winogrand, and Diane Arbus was presented at MoMA in the exhibition New Documents. Curator John Szarkowski recognized the three as leaders of a new generation, who had outgrown the earnest humanism of mainstream photography in the heyday of the magazines. “Their aim has not been to reform life, but to know it,” he wrote.

The Pop-inspired wit, offhand wisecracks, and formal innovations that mark Friedlander’s first maturity would never disappear from his work. Beginning in the early 1970s, however, his sensibility and style broadened considerably, yielding a fluid stream of observation, ever more graceful and sensuous. One agent of this remarkable sea change was the evolution of Friedlander’s craft. At first hard-nosed and urban, his pictures became richly descriptive, alert to subtle variations of texture and light.

Another factor was his growing affection for tradition, notably for the work of Eugène Atget. Atget’s keen eye for the vernacular had inspired Evans; now Atget’s more lyrical vision helped to open new doors for Friedlander.

In 1976, the unfolding of Friedlander’s work gave birth to The American Monument, an ambitious book selected from more than 1,000 photographs that delight in the variety of the country’s public monuments, from the noble to the ridiculous. The nimbleness of Friedlander’s style matched the variety of his prey, spawning an outpouring of pictures that are by turns blunt and complex, matter-of-fact, funny, ironic, affectionate, and grave. Together they capture America as richly as Atget had evoked the identity of France half a century earlier. (…)

The book tracks the growth of his work in groups both small and large. Some measure the evolution of perennial themes; others are devoted to personal projects-flowers and trees, Japan at cherry-blossom time, nudes-or to the commissions that began to come Friedlander’s way in the late 1970s. Factory Valleys: Ohio and Pennsylvania (1982), an exhibition and book commissioned by the Akron Art Institute, is a collection of views of the industrial Midwest complimented by eloquent pictures of people at work — a new and fruitful theme. When it comes to people, Friedlander is essentially an observer of individuals… His studies of workers in the factories of Ohio and Pennsylvania are admiring, even intimate, but they don’t pretend to be portraits. Instead, they are tributes to the skill and steady concentration of people “making things we all use”, as Friedlander later put it. Over the next two decades, five further commissions would enable him to extend the theme further, from office workers at their computers to telemarketers on the phone.

The survey of Friedlander’s work of the 1980s concludes with two major projects — Nudes (completed in 1991) and Letters from the People (1993) — each of which took more than a decade to compile. The 1990s are introduced with four pairs of photographs. In each pair, one picture was made with a 35mm Leica, the camera Friedlander adopted for his personal work in 1955. The other was made with the square-format Hasselblad Superwide, whose negative (nearly four times as large as the Leica’s) greatly enhances the richness and precision of the image. Perhaps still more important is the Hasselblad’s unusually sharp and wide lens.

In the early 1990s, Friedlander’s growing desire to photograph the landscape of the American West prompted him to try out the Hasselblad. Soon he adopted it for the full range of his work and, as the Leica-Hasselblad pairs make clear, all of his old problems were new again. Already seductively tactile, his crowded pictures became downright voluptuous, as the expansive lens invited the eye to explore under, over, and around his elaborate foregrounds and probe far into the distance. He has deployed the new style in a diversity of projects, including a suite of self-portraits. Most impressive among the completed projects is Sticks & Stones: Architectural America (published in 2004), the latest chapter in Friedlander’s uniquely vivid and far-reaching exploration of contemporary America.

Presented in depth for the first time in this book are the results of the photographer’s ongoing preoccupation with the grand natural landscape of the American West. These convoluted scenes, at once magisterial and bizarre, testify to the undiminished intensity of Friedlander’s passion for looking and to the capacity of his art to infect others with that passion. 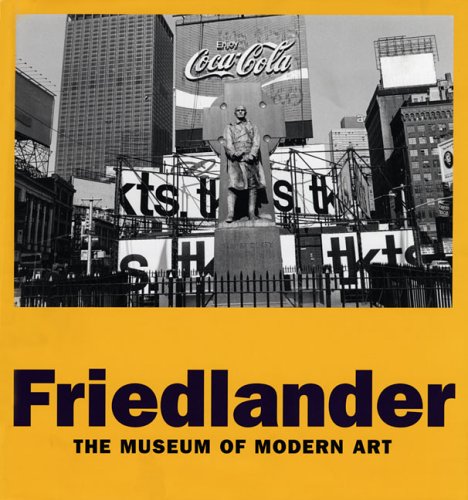