Interview
Amazon Days, Amazon Dreams
Diptych portraits from deep inside the Amazon jungle reveal an indigenous people teetering on the edge between age-old traditions and the impending swell of globalization.
Interview with Lena Mucha
View Images

Amazon Days, Amazon Dreams
Diptych portraits from deep inside the Amazon jungle reveal an indigenous people teetering on the edge between age-old traditions and the impending swell of globalization. 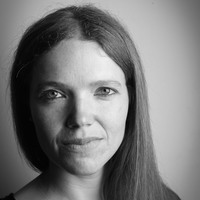 “Amazon Days” is a photography project by Berlin-based photographer Lena Mucha that centers on the women of a tribe called the Tikuna. Over the course of a week in the Colombian Amazon, Mucha observed and documented a coming-of-age ritual where young women are kept in isolation during their first menstruation in order to prepare them for womanhood.

As globalization makes its mark on the community, the young are left in a strange limbo between tradition and modernity. We see pages from glossy magazines glued to the walls of the wood-hut interiors that serve as bedrooms, and football shirts which have replaced traditional wear. Portraits of the women sit side-by-side with shots of the Amazon that highlight—while it lasts—the fierce bond and connection these people still maintain with nature.

LensCulture contributor Eva Clifford spoke with the photographer to learn more about her project and the importance of empathy in her work.

LC: How did you discover this story in the first place? Can you briefly describe what is the story about?

LM: I came to this region with a group of photographers actually. We were working on a participatory photography project with the local indigenous community. It was organized by the photography collective ”+1,” a group of photographers from Latin America, mainly Colombia. I worked with them mentoring a small group of students. One of my colleagues who had been working in this area before first told me about the ritual and when I went there, I started to research.

The work is about the coming of age of the young Tikuna women. The Tikuna are one of the four indigenous groups that live in the Colombian Amazon, near the Peruvian and Brazilian borders. Life in this part of the world is geographically isolated. Still, despite being reachable only by boat, globalization has found its way in and left marks on the traditions and ways of life.

One of the visible examples of acculturation is the transformation of the menstruation ritual—one of the more important for the Tikuna. Named Yüüechiga (pelazón), it is a female initiation ceremony in which young women are isolated from men and their community during their first menstruation. They remain isolated for up to one year, sometimes longer. Despite this isolation, the ritual is not about loneliness. It is a time when girls are prepared for their role as a woman; they usually voluntarily choose to participate. Still, the ritual is being practiced less and less these days.

LC: Because of its geographical isolation, did you have any troubles gaining access into this community? How were you able to build up a level of intimacy with the women that allowed you to photograph them?

LM: I needed some time to gain access and not all of the girls wanted to be photographed. But overall, they were very open to the project. At the time of photographing, empathy is very important for me to build my up my relation and achieve a level of intimacy.

It’s not always about spending a lot of time with the people (though it can help), as in this case I only had a very short time with my subjects. Still, no matter how long I have, I try to perceive how the other person feels when I portray them. You have to open yourself if you want them to open in front of you—it’s a lot about feeling.

LC: What was the most interesting experience you gained while working on this project?

LM: What really touched me was the relationship the women, and in general the community, have with their surroundings, the Amazon. Myths are central to the culture, forming a beautiful and powerful heritage that is central to their individual and collective identity. Although globalization is coming step-by-step to this region, they are still maintaining a special connection with their surroundings. In short, I discovered how the Amazon has a unique energy. “Rough poetry” as one of my favorite photojournalists, Mads Nissen, described it recently. These words capture the Amazon very well.

Lena Mucha is also active on Instagram—you can find more of her work on her feed.