Winners, Single Image Category: 2014 LensCulture Portrait Awards
See the winning images, and read statements by all of the winning photographers in this category. 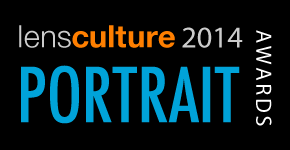 My work is deeply rooted in my family history. After the death of my mother when I was twelve years old, I became increasingly curious about notions of family, memory, and mortality. I was raised by my father: an avid hunter, archery champion, and former hunting guide, whose collection of taxidermy trophies began to grow exponentially that same year that I turned twelve. Growing up amidst the hunting culture of northern Michigan, I learned to see the ritual of hunting as a way for humans to connect with and conquer untamed nature; it is a ritual that speaks to notions of mortality and the interconnectedness of life within a larger system.

This portrait was done for a personal project titled "Las Mujeres" which was published in a special issue of Red Collector magazine on the subject of Pedro Almodovar. The series was based on the theme of women in Almodovar's films, ranging across a wide array of strange personalities and characteristics. "Sister" was one of these portraits.

In my photography, I always try to create worlds that feel close to me. The magical and the cinematographic are two such examples. First, I dream my stories. Then I try and realize them.

Third Prize: Ulrik Tofte, Denmark
From the series "The key is not to blink"

The most important step to understanding Africa today is not to blink. All over the continent, the middle-class is growing and the societies are changing. In particular, there is an increasing focus on the individual. This series tries to focus on the growing individuality, where personal ambition, expectations and dreams are now exceeding basic necessities. My work is set in Ghana, a country that has not wholly changed, but where key differences are evident. I chose to portray ordinary people who I met on the street, focusing on moments where the individual becomes clear.

The cultural development of a middle-class in the West took decades. In Ghana, the technological developments take place in just a few years, while the culture and the people struggle to adjust. What's at risk is a disappearance of local identity and the unthinking adoption of foreign popular culture.

And be sure to explore the work of all the other winners and finalists.