Feature
Back to Wellhead: Gathering Water
On the outskirts of a Romanian city, the inhabitants get their water from natural fountains—thus, these photos offer a meditation on our relationship to our most precious resource.
Photographs by and interview with Lucian Bran
View Images

Back to Wellhead: Gathering Water
On the outskirts of a Romanian city, the inhabitants get their water from natural fountains—thus, these photos offer a meditation on our relationship to our most precious resource.

In my hometown, where the city meets the forest, people leave civilization behind and go to the wild for an almost primitive ritual of water gathering.

The wellheads at the edge of the city offer the community an opportunity to relive the sacred gesture of returning to the source: water. Each source has its messengers, its supporters, people who rave about the liquid's special qualities (sometimes proven in laboratory tests). The water, carried home in large plastic containers, offer those who live in apartment buildings a means of natural purification.

Thus, the water gains particular meaning, going above and beyond a simple material existence. The water comes from the mountains and lies in wait, always available to those who seek it out.

For those people who go get water regularly, the ritual has lost all mystery and magic. But for the unfamiliar eye, it is a strange sight indeed. For the locals, the water devotees are simply part of the scenery; for me, they were something special.

An interview with Lucian Bran by Filip Stanczyk

Lucian Bran was one of the honored photographers in the ShowOFF category for newcomers at this year’s edition of Kraków Photomonth Festival. Bran's series, "Back to Wellhead" has all the makings of classical documentary: his photos are aestheticized but show no sign of exaggeration and they investigate a humanist subject with sensitivity and respect.

Yet there was something about the photos that continued to intrigue, beyond the surface. Over the summer, we witnessed the global rampage of ice water pouring out of buckets. There is something basic and elemental about water. And in the end, that's what "Back to Wellhead" is: a meditation on water; its meaning and place in our lives.

Filip Stanczyk: How did it all start?

Lucian Bran: It was a January morning and I went out to take some photos for an existing project, but I saw some people in the forest and I got curious about what was happening there. These were my first "Wellhead" photos. After the first shots, the two people I had found told me about two more fountains in the other part of the valley and so I went there.

So then you asked them what they were doing?

I didn’t ask them but I figured it out as I began to take more photographs. Besides the obvious purpose of getting water, I believe it’s also a way of socializing. They go to the fountains in the summertime and while they're there they have a beer and chat.

I think it also gives the people an excuse to connect with nature. Brasov was very industrialized town during the Communist times but it became so quickly. Most of the inhabitants were brought from villages. When they arrived in Brasov, they came with all of their belongings. Many of these former villagers had trouble adjusting to city life. One way they hung on to their traditions was by by continuing to collect water from natural fountains. Thus, I think the water-gathering phenomenon is in their roots.

Could it also be some kind of spiritual activity?

You could certainly assign a kind of spirituality to it, given the fact that water and springs have such strong semiotic interpretations. But to my eye, it's more of a ritualistic habit, something that became part of these people's daily schedule. A bit like going shopping.

The subjects in your photos are often looking at you. Did they think you were an intruder? How did they feel about you entering their space?

It was easy with kids because they didn’t respond, but it’s a bit tricky with elderly women. One of them wasn’t sure about me and after I took the photo I went to get water and I told her that I was doing a project.

Once I explained, she was glad. Romanian people have a phobia of cameras, because of some celebrity scandals, but as long as you're friendly and open, they are quite accommodating in the end.

One day, you started getting water yourself. How did it feel to take part in this ritual?

When I went to collect water, I went with a friend. It turns out my friend regularly gathered water at the fountain—something which I had never known about him!

The feeling of arriving home with fresh water is great. For the whole rest of the day it feels particularly cold and fresh. You can definitely taste that you're drinking especially good water. It's not that the water has any important or extraordinary chemical qualities—it's simply very clean. It turns out that tap water needs quite a bit of chlorine and other things to be safe to drink.

Your photos seemed completely different from the other ones in the ShowOFF category at Krakow. Do you consider yourself an engaged photographer, someone who tries to look around and tell something important about his environment?

I can say that I really believe in what I do and I put all my personality in my projects. When I start working on something, I think a lot about the subject before I begin taking photos. There is a level of engagement in all of my work, but there are different degrees depending on the subject. You can "engage" but just for fun, which is not a very strong feeling. Or you can engage with a very serious purpose in mind. I lean towards the latter. I’m very committed to what I do.

How important are aesthetics in these pictures? For example, I see a difference between these images. The first one seems more like a snapshot—it isn’t perfectly composed. In the one below, we find a very soft light and a tree crossing the image diagonally which keeps your eye interested. Why the difference? 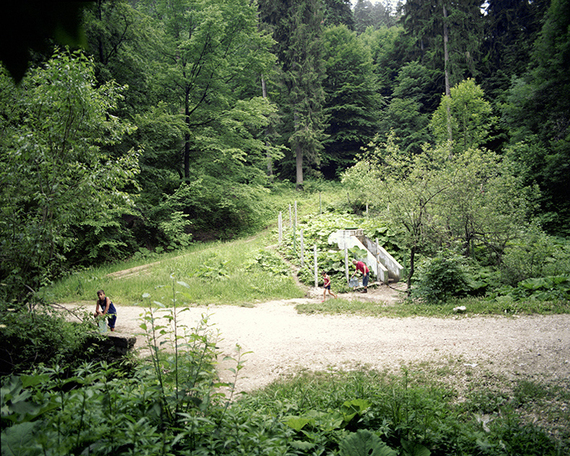 The first one was made at the beginning of this project. I had to find a good spot to make a photo but I wasn’t really familiar with the terrain and there was a lot of agitation. I was surrounded by big plants and I wasn’t on the top of the hill. In short, I didn’t have time to compose it very well. But it’s OK: some of the photos in the series have something of a "decisive moment" feel, rather than a perfectly composed one. In general, aesthetics are very important to my work, a fact which I think is generally pretty clear. 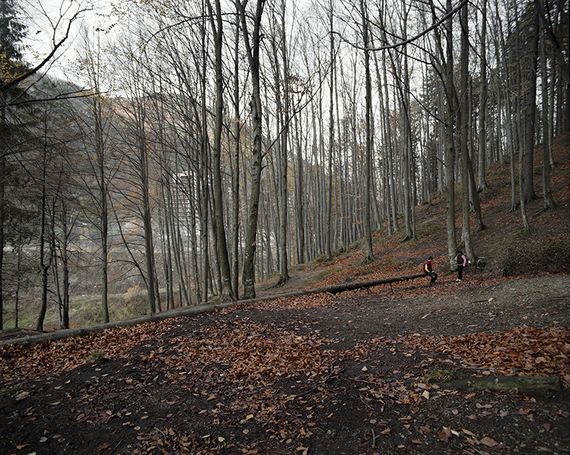 Do you think that these photos, although depicting an old-fashioned ritual, offer us something about our current times?

Recently, there have been many debates worldwide about the right to water. The Nestlé company questioned the idea of water being a public good—a statement which echoed loudly. As time goes on, water will become more and more important. Already we are beginning to see how having free access is a privilege which is denied in many areas around the world.

In general, those of us who do have easy access to water don’t appreciate it very much. We take it for granted. I hope my photos cause people to think a little bit more about where their water comes from. An unthinking relationship to our resources is a hallmark of contemporary society. Hopefully we can all begin to change that.

About the contributor: Filip Stanczyk has written on many subjects but his latest passion is photography. You can find more of his work on his (Polish) blog.