Interview
Scenes
One of Latin America’s most respected photographers speaks with LensCulture about his personal history and its effect on his work—as well as making images that “come alive inside the viewer’s being.”

Scenes
One of Latin America’s most respected photographers speaks with LensCulture about his personal history and its effect on his work—as well as making images that “come alive inside the viewer’s being.” 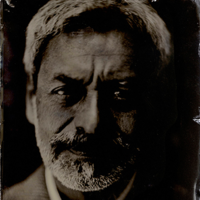 Shot through with intense melancholy and rich sepia tones, Luis González Palma’s Escenas is a uniquely engaging photo series. Each of the finished pieces compiles work from several different photographs, and the result—stretched into a panoramic format—hints at a private narrative that floats just out of reach.

Born in Guatemala in 1957, Palma is one of the most significant photographers from Latin America working today. His work is collected by the Art Institute of Chicago, USA; the Museum für Fotografie, Berlin; the Maison Européenne de la Photographie, Paris; The Daros Foundation, Zurich; and the Museo de Bellas Artes in Buenos Aires, among other institutions. Despite his prolific photographic career, however, Palma was trained as an architect, a background that influences how he approaches photography. “It is all connected, life and your experiences,” he says. “It all dictates the way you feel and transform your world. Having studied architecture gave me, I believe, the possibility to mentally conceive the idea in relation to the space. My background made me realize that we inhabit ideas; when we experience a work of art, we face it in the context of our own life experiences”

Palma started working on Escenas (or “Scenes”) in 2011. It features a set of images that have been hand-printed and manipulated to create long, panoramic spectacles. Working with orthochromatic film and collaging the photographs together after they’re printed, Palma constructs cinematic tableaus that each seem to contain their own story. When I asked him about the project, he remarked, “the main idea was to create images from filmic sequences—to make polyptychs with an open narrative.” This narrative is developed through Palma’s use of “diverse symbolic elements” paired with multiple shots of his models.

Each of the scenes in the series has a protagonist—a human figure—as well as an object or motif repeated throughout the image. In one photograph, it’s a chandelier; in another, picture frames or a set of chairs. “The objects are representations of a history that does not end, a memory that is still present and affects us,” observed Palma. “They are loaded with meanings, and they create a narrative that in certain cases may be a little ominous. In this series, each object is another actor in the plot that I try to show; they are an integral part of these small vignettes that speak to our loneliness and helplessness.”

Palma’s images have a foreboding air; as viewers, we feel that we aren’t necessarily welcome in the world he has created. This melancholy has deep roots in Palma’s personal history. “I come from a Catholic education,” he says. “Even though I am not a practicing Catholic, I am aware of a tragic feeling in life, a feeling that we live in a lost paradise; that, even with everything powerful and beautiful around us, there are always cracks…something essential is always lacking.” Indeed, there are symbols in Palma’s work that suggest Catholic iconography. In one image, a drip of red marks the torso of a statue in the classical style; its placement on the figure’s chest is unquestionably an allusion to one of the Five Holy Wounds, where Jesus was pierced by the Holy Lance as he languished on the cross. Likewise, the text layered into Palma’s imagery is usually taken from books related to the Catholic religion. A kind of secular spirituality drives and directs Palma’s creations.

This spiritual mindset seemingly imbues every step of his creative process. Speaking about how he chooses his models, he notes, “I select my models in a very intuitive way; I have to recognize myself in them, in their look, in their stance towards life. Many times, they are friends; others, they are people whom I ask to pose for me.

“We talk a little about their life—their desires, their loves—but there is usually more silence than words. Then follows a whole post-production part where I choose the best way to show the emotional aspects of the process.” This intensity is palpable in the final product of Palma’s endeavors.

Palma is a remarkably focused and dedicated conceptual artist. His reading list and catalogue of muses is daunting—he takes inspiration from “Francis Bacon, Willys de Castro, and Gabriel Orozco…as well as Buddhist and Taoist texts and contemporary philosophers such as Georges Didi-Huberman, Diego Lizarazo or Ticio Escobar”—and, when asked about his influences, he responds, “I am interested in thought, in science related to art…in short, in everything that continues to give meaning to our existence.”

Most striking, however, are his hopes for how viewers will interact with his work. “My main wish is to generate images that live in the mind of the viewers. I want viewers to make [these images] their own, so that they come alive inside the viewer’s being; that they travel along with them in silence. I think this only happens if the viewers recognize themselves in the work—if the work has enough strength to be able to transmit all the symbolic values that the work hides and harbors.”

If you’re interested in seeing more work like this, we’d recommend the following features: This is You (Here), an affecting photo series by collaborative duo Albarrán Cabrera that pairs personal and found imagery; Stories from the Kitchen Table, compositions by Astrid Reischwitz that speak to her family’s history on a farm in Germany; and Guatemala: Ixil Genocide, a project about the modern-day descendants of the ancient Mayan civilization who are still reeling from a violent genocide perpetrated against them.