In her first book, Rememories, French photographer Maia Flore travels the world alternately defying and collaborating with gravity and the elements. Like a professor with a red pen in hand, she challenges the mundane — her red dresses, capes, hair and scarves are the marks of correction and embellishment. Flore hides her face — a device that denies but also invites the viewer to participate and invent.

In one image, her face is replaced by the hair on her head, and her mouth by a red bow. The functional has become purely decorative and silent. The artist’s hair is no mere ornament, instead, it is a willful subject throughout the book. It pours down a staircase, absorbs coffee and bleeds into her clothes, she hangs from it like a forgotten jacket, it ties her to a tree.

Despite coming from a family that generally disapproved of artists, Flore always trusted pictures over words — pictures simply spoke to her more than words. She soon realized she could do a better job of ‘talking’ with pictures. She learned graphic arts, painting and collage techniques at Les Gobelins, école de l’image, but once she mastered retouching, photography became the final point of expression for her ideas.

She realized that, “If I can do it with photography, no one will ask if it happened or not…It is possible to have this reality…” She says, “It is a moment in-between, it has to be created, set up, a scene I want to be in…it is a moment between reality and imagination. You take something in your mind, and make it real — like the wishes of a child who says ‘I want to jump into that tree’ — in photography this is possible.”

Fortunately, Flore has been given the freedom to do whatever she wants in her commissioned work. One of the most striking photographs in the book is an image that Flore created on assignment for Kinfolk magazine. Since childhood, Flore has believed that “the human body is not just anatomical parts, it also has other things inside it, like landscape. When you meet someone you see their face, but that’s not what you are interested in, that’s not what they are.” Here, she attempts to make visible that which is hidden from the eye, as the figure absorbs and transforms the coffee — what might be inside is shown on the outside.

The photograph of Flore on the cover of Rememories sets the tone for the book. The artist’s head is defiantly in the clouds — wreathed in a white mass. However, she is not merely ignoring the humdrum. She is an instrument set to read the aether, like a weather station or a satellite dish, for transmissions to share in her favorite language, pictures.

Rebecca Horne is a photographer, and she writes on photography, science and art in national publications and the multimedia mobile platform Storehouse. Recent writing includes Wild Pigeon for Daylight and What do these uploaded videos say about society? for CNN. Recent writing in print includes a book essay for California based-artist Johnna Arnold’s In/Finite Potential. 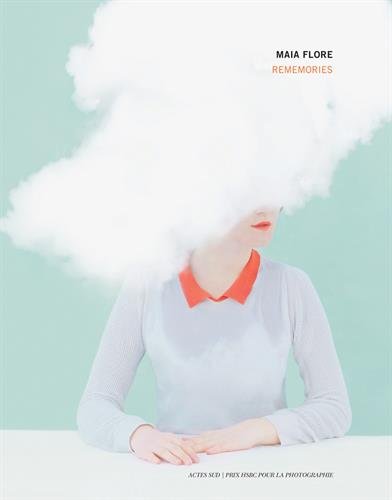