Interview
State Business: Following the Money in World Conflicts, Arms and Ammunition
By using photography to document the practically invisible flow of money used for weapons (but not action on the front lines, nor the aftermath of war), Mari Bastashevski is hoping to expand and evolve the role of photography in the genre of conflict reporting.
Photographs by, and interview with Mari Bastashevski
View Images

State Business: Following the Money in World Conflicts, Arms and Ammunition
By using photography to document the practically invisible flow of money used for weapons (but not action on the front lines, nor the aftermath of war), Mari Bastashevski is hoping to expand and evolve the role of photography in the genre of conflict reporting. 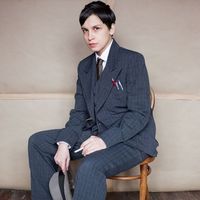 Photographer Mari Bastashevski has shared an important work-in-progress with LensCulture. She is combining hard-edged investigative journalism with the power of photography and multimedia to explore and explain the people behind the “business” of world conflicts, arms sales, ammunitions and international supply chains.

The title of her project is “State Business.” By using photography to document the flow of money and arms supplies (but not action on the front lines, nor the aftermath of war), she is hoping to expand and evolve the photographic genre of conflict reporting.

LensCulture Assistant Editor Alexander Strecker interviewed Mari Bastashevski via Skype. The following is an edited version of their conversation:


LC: How did “State Business: begin? This is an unusually pertinent question due to the sprawling nature of the project.

MB: Having just returned from Libya, I was researching how Qaddafi had acquired such large stockpiles of arms and ammunition, and this birthed the idea: looking at the logistics of the arms dealing process through specific case study. I think it was when I was discussing that concept with a journalist, Simon Shuster, that he mentioned, in passing, a string of arms deliveries made to both sides in the Nagorno-Karabakh conflict simultaneously. Something about that case stuck with me and those shipments eventually lay the foundation for the first two chapters of the project. The cases proved rich to mine, spreading over a dozen countries.

LC: How has the project changed or evolved since?

MB: When I started, I was very interested in the ground research, the factual details behind transactions. Since then, I have become increasingly fascinated with the way that information is shaped by its sources, depending on their financial, political, or personal interests. A related theme is the question of where my role as observer stops and my role as a participant begins. I have also had to confront the overwhelming banality of day to day proceedings in the industry. In particular, the whole suite of bureaucratese employed to avoid the words “death”, “killing”, “people”, “human rights”.

LC: What separates “State Business” from an institutional report?

MB: How art fields intervene in the circulation of information is a loaded question. To put it very simply: it’s a different animal. The intention of a photographer (or artist, if you will) is to get under the skin of an audience, opening up certain concepts and ideas, whereas an institutional report is more about reaching a closure, advising governments on how to act, putting an end to an issue hovering in the air.

Let me try to take that out of the abstract. At the end of the report, the UN group of experts present documents to verify the validity of the report. In exhibition format, “State Business” uses three sets of (clearly labelled) identical documents, one verified institutionally to be authentic, one inconclusive, and one made with Indesign, to examine the validity of paperwork.

LC: But I can see from the footnotes that you do collaborate with researchers?

MB: On the research part, absolutely! I try as much as possible to exchange and corroborate information with the local investigative journalists wherever I go, and in general, with research facilities like CIT-Map, SPIRI or Small Arms Survey. I’m also collaborating with an independent San Francisco analyst Andrey Tselikov, whose role is to scrutinize and fact-check the open source information referenced in the texts.

LC: Why take photographs? There’s so much data contained in the project, photography doesn’t immediately seem like the best way to convey it.

It’s a challenge. To me the information or data does not in itself comprise a body of work. It does however prescribe what the photograph will be, where it will be, and how it should be made. This isn’t a particularly new initiative: Sekula, Ribas, Simon, Paglen have all been addressing similar issues for a while.

LC: Could you say more about how you decide what to photograph?

In “State Business,” each image represents a concrete governmental institution, a broker, or a business. Each image is made with the permission of that entity. And when permission is denied, usually due to security reasons, I ask at what distance it can be permitted: at the reception? The entrance? From 10 meters away? In a sense, each photograph is directed by that entity, and is a constructed self-portrait. This isn’t something I would be able to convey through any other medium.

LC: What about the presentation of this project? There is, after all, a lot more material than the pictures.

MB: It’s a little early to say with certainty but for the time being, I think it’ll be presented in the form of an exhibition and a book. The components of the project include texts, photographs and documents. I’ve also accumulated a few promotional business “ready mades.” I have yet to decide how (or if) to include the latter.

LC: Once this is all over, do you hope that your work will have real-world implications?

MB: If by real world implication you mean substantial policy changes, then no, that would be an arrogant line of thought. The work is a contribution to an extensive shelf of cultural, journalistic, and research material, and I would be pleased if it has implications in the way we understand the industry, or the way we think about photography. I think that trying to understand, without jumping into action, is practically a full-time job. I believe in the activism of thinking.