Book review
Frame
You may find his work and his methods odd, disquieting, or even distasteful—but there is no denying the power of Mark Cohen’s in-your-face street photography.
Photographs by Mark Cohen
View Images

Frame
You may find his work and his methods odd, disquieting, or even distasteful—but there is no denying the power of Mark Cohen&#8217;s in-your-face street photography.

Two years ago, LensCulture named one of Mark Cohen’s photobooks, Dark Knees, its favorite photobook of the year. The review of the book drew attention to the quality of its contents while at the same time identifying a disquieting play of impulses present in Cohen’s work. Now we have Frame, packed with over two hundred and fifty images, many never-before-published. This being the first retrospective of Cohen’s career, the book allows us to step back and consider his oeuvre.

His photographs are inescapably associated with Wilkes-Barre, Pennsylvania, the small hometown whose streets he haunted for decades with his camera and his trusty flash. But Frame also includes shots taken in other American states as well as in Spain, Ireland, England, Italy and Mexico. The book’s sequencing has been arranged by Cohen himself—mostly black and white but some colour—and if this is taken as an act of self-representation, it makes the collection all the more revealing

Frame confirms what the prior review put its finger on: “obsessive, cinematic …. compulsive images, rather than compassionate.” Cohen’s pictures are undoubtedly arresting, homing in on textures, quotidian objects (bricks, shoes, garments) and odd moments of everyday life (raindrops on a puddle, children playing, grimaces). His framing is haphazard or downright eccentric (body parts missing due to radical cropping), angles are out of kilter (a viewfinder is rarely used, often shooting at arm’s length or from waist height) and the camera is frequently and alarmingly close to human subjects. Alarming because Cohen’s preferred method is not to announce his presence but come at people unawares and shoot instantly, before they have time to realize their personal space has been invaded and before he has had time to compose a frame.

His methodology is unorthodox; the results are often startling and one follows from the other because without the photographer trespassing completely and suddenly into other people’s space, images like “Knee”—with its strange geometry of light and shadow around the leg and white sock of a child—could not be captured at all nor grab our attention so unexpectedly.

Another photograph, “Girl and Man at Road,” returns to similar subject matter, though this time a girl’s legs in socks stand alongside a man’s legs in trousers. It’s not disturbing but it is puzzling and, taken with other characteristic photographs like: “Bandaged Boy on Bike” or “Girl Holding Blackberries,” we begin to sense a surrealist—or fetishistic—concern with the sensuality of textures, bodily and non-bodily alike.

You may find his work and his methods odd, disquieting, or even distasteful—but there is no denying the power of Mark Cohen’s photographs. The publication of Frame makes this more obvious than ever before. 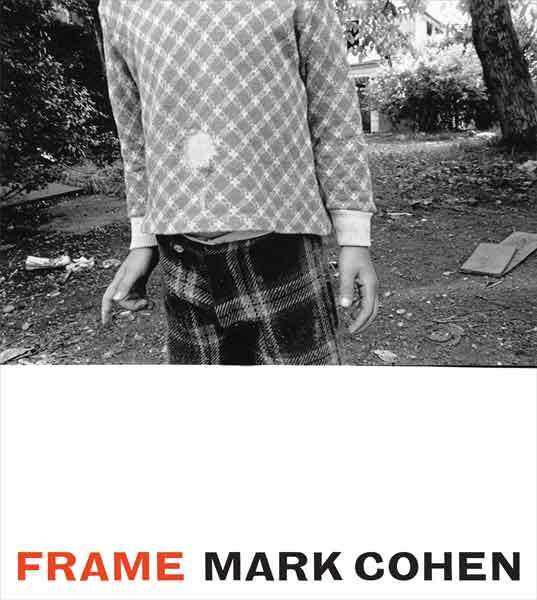