Book review
Rage Against the Light
Deep within the rich blacks and glaring shafts of light, we find the city of Sydney as an abstracted backdrop for fragile human presence, a chaotic stage of ceaseless development and consumerism, tempered by the photographer’s intimate touch.
Photographs by Markus Andersen
View Images

Rage Against the Light
Deep within the rich blacks and glaring shafts of light, we find the city of Sydney as an abstracted backdrop for fragile human presence, a chaotic stage of ceaseless development and consumerism, tempered by the photographer&#8217;s intimate touch.

With a title taken from Dylan Thomas’ famous poem (‘Do not go gentle into that good night…Rage, rage against the dying of the light’), Andersen’s photos feature the city of Sydney as an abstracted backdrop for a fragile human presence dwarfed by overwhelming architectural development and consumerism. Amidst the moody, black-and-white images, essayist Sandy Edwards notes that “people scurry about being literally exposed by light. They are struck by shafts of it between buildings like insects coming out for food.”

Andersen’s subjects are often solitary and lost in thought. Others are frozen by the camera as they rush to their next destination, huddled against the relentless presence of an unforgiving built environment. In the words of Andersen, “I look for elements that will add a mood to the image: my creative decisions are made in an instant. I shoot fast, take the frame and move. I guess it’s like trying to capture lightning in a bottle.”

[Enjoy this short video trailer, produced by the book’s publisher, that gives a great sense of Andersen’s highly specific aesthetic.]

Urban alienation is a rich topic that has engaged many artists. In “Rage Against the Light,” Andersen’s placement of frozen, anonymous figures within this environment is critical to the success of his images as is his openness to the unexpected compositional rupture—a sudden hand pointing from the side, an unexpected tattoo on a shoulder, a bird scurrying away from marching commuter feet. All is anchored by bright light and rich shadow. Andersen comments that “the camera must be an extension of my eye and soul, I cannot have any technical barriers between myself and the world in front of my lens. As a result all my cameras are very simple.” 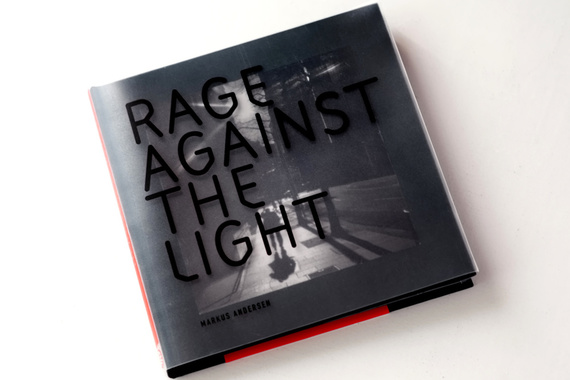