Interview
40 Years of Photographing Street Art Around the World
How do we archive works of art that are inherently temporary? For four decades, Martha Cooper has used photography to memorialize and record public works of street art and graffiti.


40 Years of Photographing Street Art Around the World
How do we archive works of art that are inherently temporary? For four decades, Martha Cooper has used photography to memorialize and record public works of street art and graffiti. 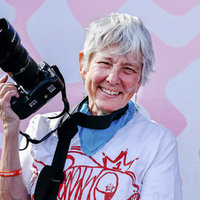 Photographer Martha Cooper has documented the formerly underground culture of street art for close to four decades. Throughout her career, she has met some of the kings of graffiti—from Dondi White to Keith Haring. Today, many street artists only consider their wall complete when Martha has immortalized it with her camera.

But Martha is more than a photographer—she is also an important historian and archivist. For years, she has collected catalogues, photos, and objects that span the evolution of street art. Now she has donated much of this vast collection to the Urban Nation Museum of Berlin, the first street art museum in the world, inaugurated last September. As an ode to this incredible collection, the museum created the Martha Cooper Library, where enthusiasts, scholars, graduate students, and curators are able to study images of street art and graffiti.

Some months ago, I traveled to Berlin to speak with Martha Cooper face-to-face. We arranged to meet in the entrance hall of a museum. A few minutes after my arrival, I realized that I wouldn’t find her there, so I went outside and, sure enough, I saw a lady with a camera standing in the middle of the street. She was waiting for a train designed by How & Nosm, Fairey, and Faust, which only passed by every 35 minutes. So, she invited me to interview her there, waiting for a train that she simply couldn’t miss.

Maria Vittoria Baravelli: Why is photography important to you? What is its significance?

Martha Cooper: Well, it’s my life. I don’t feel complete when I don’t have a camera with me. If I leave home without it, I feel as if something is missing. Having a camera makes me look at things more closely.

MVB: Your first job was at the New York Post. Were you a photojournalist for the publication?

MC: The New York Post was the first job I had when I moved to New York in 1975, but I had many jobs before that. I previously worked for small newspapers, and I was a National Geographic intern in 1968. While working for the Post, I became fascinated with New York-style graffiti. At the time, few people understood what it was.

MVB: Can you tell me how graffiti differs from street art?

MC: Graffiti consists of writing your “street name” in stylish letters, usually with a spray can or marker. Street art can be any kind of image, made with any kind of technique. Also, graffiti writers usually appropriate public space illegally, whereas street artists often, but not always, have permission to paint. Many street artists began their careers by painting illegal graffiti.

The train I’m waiting for right now is made up of cars designed by street artists Faust, How & Nosm, and Shepard Fairey. See, conducting the interview here is interesting because now you understand what you have to do sometimes to get the right photo. Wait, wait, wait—and then the train passes, and it’s not the right one. So, then you have to keep on waiting…

MVB: Can you talk about Subway Art, your book of photographs that documents the world of graffiti?

MC: I put Subway Art together with Henry Chalfant. It was a joint project created by two people who were separately documenting the scene. We had a lot of difficulty finding a publisher for Subway Art. Most New York editors hated graffiti.

After many rejections, in 1982, we flew to the Frankfurt book fair with our proposal and met with an English publisher, Thames & Hudson. They immediately liked the project. The book finally came out in 1984, but it was not an immediate success. Booksellers often kept it in a locked case because it tended to disappear from shelves. It had the dubious distinction of being the most stolen book of the time.

MVB: The memory of a work of art is divided into two parts: the image itself, and the meaning that the viewer, over time, attributes to that work. Your photographs preserve the image, but who do you think will safeguard the meaning of the work? The curator, the museum, the public?

MC: People are free to interpret photos however they want. A library is useful for this very reason. People can look at photos and discuss works of art that no longer exist, and as such, some artists may gain importance over time as people study their work.

When I photograph a graffiti piece or a mural, I try to take a picture that shows the entire work without distortion and includes some context. I do not try to transform the work into my own art by means of special lighting or distorting lenses. I don’t see myself as an interpreter, but rather as a provider of documentary evidence, of historic preservation. The meaning and value of works of art can change over time, based on developments in our society, culture, and politics. A photograph of an ephemeral work allows that to happen.

MVB: You are the one who provides the documents, but what do you think about the impossibility of conserving every single wall and image forever? Street art is almost necessarily ephemeral…

MC: In the past, it was impossible to photograph everything. Cameras were difficult to operate, and film and processing were expensive. Today, everyone has a camera, and with digital technology, it’s much easier to take good photos. Also, many street artists are excellent photographers and create their own archives. Their photographs will last longer than their art.

Photography has always been important to urban art. It’s the only way we will be able to see and understand this art in the future.

Based in Milan, Maria Vittoria Baravelli is curator of art and photography. She has written essays for exhibition catalogues and contributed to publications like Il Corriere della Sera, Artribune and Il Fotografo.