Interview
Stockholm Blues
A dark, beautiful, aggressive protest against Sweden’s dissipating sense of collectivity in the face of consumption—and an accompanying interview that looks back on a 40+ year career in photography.
Interview with Micke Berg
View Images

Stockholm Blues
A dark, beautiful, aggressive protest against Sweden&#8217;s dissipating sense of collectivity in the face of consumption—and an accompanying interview that looks back on a 40+ year career in photography. 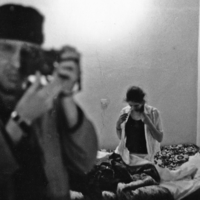 Born in Singapore and raised between Stockholm and the smaller Swedish town of Sundsvall, Peter Mickhael (“Micke”) Berg has been a working photographer since 1971.

Best known for his work on Sweden, Berg has participated in nearly a hundred exhibitions in his career. His photography has been featured in the Nordic Museum, the Stockholm City Museum, the Stockholm House of Culture [Kulturhuset Stadsteatern] and many other venues in cities around the world.

In the following interview, he discusses his intriguing photoessay “Stockholm Blues” while explaining more about what lies at the core of his lifelong engagement with photography.

LC: You once said, “I have never [concerned myself with] the ‘artistic,’ but [instead] with having a life—a life that is an adventure.” Can you say more about how this choice has played out? If you could go back, would you make the same decision?

MB: From the very beginning, I was involved with three different careers: rally car driver, professional cyclist and author. As luck would have it, I broke my arm one day in a cycling accident. In the aftermath, I began following the races as a spectator and photographing the other cyclists.

I immediately loved it. It gave me both independence and immediacy; I felt free. Of course, I made no money, and my life was always anxiety-ridden, but I kept at it—I could never imagine having one steady job. In the meantime, I worked many different jobs to make ends meet. I lived cheaply, but I was able to travel a lot. After a few years of this, I received some publicity and then things became a bit easier.

So, looking back, I don’t think I would change a thing. From the first moment I tried it, I felt pulled towards photography, so I made the leap. It was the right thing to do. Maybe the one thing I would alter is that I should have tried to get a contract with a big organization, like Magnum. But things worked out anyways.

LC: For you, “Stockholm Blues” represents a small protest against the moment when everybody started to take bank loans—a time when Sweden was transitioning from a collective, social-democratic country to a more private, individual state. How do your photos address this social context?

MB: I was upset about the changes I was seeing in Sweden. Ordinarily, I do stories about people who change the world for the better—house occupations, cooperative living, and so on. This project was my protest against a societal change for the worse. I felt I had to do it. After five years, the protest aspect has fled a bit, but I still think that the pictures have a dark aggressiveness in them which is unusual for my work.

LC: Your photography seems very connected to feelings and intuitions, and yet is has a lucidity that makes it feel real. The images in “Stockholm Blues” feel both authentic and cinematic at the same time. Can you say more about the project’s style?

MB: The style came from the fact that I was shooting a lot in the sun. As a consequence, I worked with the shadows a lot. I found my style by looking at Eugene Smith’s prints: his work is dark but still very lively.

After two years of shooting—in total, I spent five years on the streets of Stockholm to produce this project—I started looking, intentionally, for this dark, cinematic style. I tried to make my work powerful, beautiful and aggressive at the same time.

LC: What are your other inspirations—creative, musical, literary, cinematic…?

MB: I am a man who grew up at the end of the ’60s and ’70s. So I was very inspired by Jimi Hendrix, Cream, Ernest Hemingway, Henry Miller and George Orwell. These authors and artists gave me dreams that inspired my photographs.

In terms of photography, Henri Cartier-Bresson is a big name for sure; I am also inspired by Christer Strömholm, Danny Lyon, Mary Ellen Mark…today, I like the work of Matt Black a lot.

LC: Writing has also been an important means of expression for you. Do you frequently combine your photography and writing? How do the two relate in your mind?

MB: Initially, I was just taking photos, but after a while I had to start writing too. Since I was traveling for such long periods of time—sometimes months—nobody could keep track of what I was doing, including me!

For me, photography is the aggressive part—it takes a lot of power. Writing is more meditative. It calms me down.

Normally I shoot in the day and write in the evening. Today, I feel that I am a better writer than photographer, partly because I don’t have the power inside me that I need to make the strong work I used to make. I have gotten older; I don’t push myself so hard anymore.

LC: Your work has been shown in more than 100 exhibitions and you’ve released a total of 40 books—impressive numbers! What is your editing process like?

MB: Before I make the final prints, I let the pictures stay on a wall for some months. Or, I put the pictures into a special box and look at them over and over again. I can keep doing this for up to a year before I feel satisfied and ready to move forward.

In general, I like to work with someone else on the process once it reaches the stage of making a book or exhibition. For example, for Stockholm Blues, Gösta Flemming was my editor. At the beginning, we had around 120 pictures—we eventually pared them down to 35. Every picture that didn’t fit with the technical feeling or the light of the other images had to be thrown out.

LC: You’ve seen many changes to photography during your career—what is something that impressed or surprised you lately? A new development or an old (re)discovery?

MB: I still love Josef Koudelka. For contemporary photographers, as I mentioned, Matt Black has caught my eye. But the big thing for me right now is being able to write on my blog [Unfortunately, only in Swedish]. I love the mixture of writing and photography. I feel that writing helps me do what I do best: tell stories about life.