The photographer himself comes from Kaunas, Lithuania’s second city, and he has lived and worked all over the world. In the autumn of 2001, saddened by the events of September 11th, he found himself drawn back home. With warmth, humanity, and the honesty of a fellow countryman, he documented the changing world of a people moving away from old customs and traditions toward a more globalized – and, perhaps, homogenized – reality.

Lithuania became a full member of the EU in 2004, and the changes this impending event was causing in Kraziai are evident everywhere in these photographs. Young men embrace each other as they return for the summer vacation from jobs milking cows in Norway or picking tomatoes in Spain, while older residents are photographed alone, left to fend for themselves on deserted family properties. A new microwave and washing machine jostles for kitchen space with an old tiled bread oven, and we glimpse Hard Rock café t-shirts, and Hermés scarves.

The complex history of the country is also subtly alluded to – one of my favourite images is a still life with Lenin’s writings, four tomatoes and a cup of coffee. And there are lots of pictures of pigs – cheerful pigs, pigs decapitated and gutted for a celebration, pigs cut into hunks for a daily snack or shaped into sausages.

Perhaps my favourite aspect of this book is the frank, energetic gaze of the Kraziai people themselves. Often pictured in the open air, they look relaxed and confident even when digging a grave or taking a family summer swim in a local pond. It seems as if every one of them is about to make a joke or remark something to the photographer. Even the older people are full of intelligence, life and humour.

It’s a pleasant contrast to many so-called “sociological” or documentary photobooks. Rather than imposing his own viewpoint, it feels as if this photographer has made a real connection with these people, and chosen to share and celebrate that connection with us. 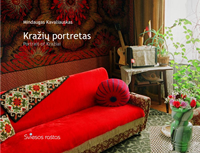