Interview
Of Poetry and Magic
Munem Wasif has honed his monochromatic way of visually interpreting the world. This juror for LensCulture’s Black and White Awards reveals the details that affect him most through the language of photography.

Of Poetry and Magic
Munem Wasif has honed his monochromatic way of visually interpreting the world. This juror for LensCulture’s Black and White Awards reveals the details that affect him most through the language of photography. 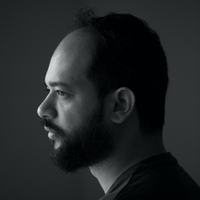 The last photograph Munem Wasif made was a sheet of black paper, captioned with a roving collection of words. Visual language can be used as an expressive form of communication, not so different from poetry or music. Within black and white photography, specifically, an absence of color abstracts reality in an emphasis of form, light and even emotion. Wasif trained himself to see and interpret the world, not only in black and white, but through all the shades between, while tapping into an essence that cannot be seen.

Represented by Agence Vu in Paris and Project 88 in Mumbai, Wasif left his home in Bangladesh last month for a year-long fellowship in Berlin through Wissenschaftskolleg (The Institute for Advanced Study). There he will focus on an assortment of projects including the interplay between still and moving images for his collaborative film, Memories of Disappearance. Wasif has helped curate multiple installments of the Chobi Mela International Festival of Photography in Dhaka, and his own photography has been extensively published and exhibited worldwide.

We are privileged to have Wasif as one of the jurors for this year’s LensCulture Black and White Awards. In this interview with Amy Parrish, he talks about the technical and conceptual aspects of working in monochrome, and gives an inspiring message to push your work deeper into the poetic abyss.

Amy Parrish: So much of your portfolio is established in a monochromatic way of seeing—even your video installations. What charms you and makes this such an important part of your practice?

Munem Wasif: When I started photography I was fascinated by the masters who were mostly creating black and white work. I taught myself how to see things in monochrome and now I often don’t really think about it. It comes spontaneously. My world is extremely colorful and, in the beginning, that color felt a bit distracting. I was more interested in people and stories and I wanted something minimal in terms of visual structure. It gives me a certain amount of clarity.

Yet, black and white covers such a vast area. I see a lot of shades of gray in between (literally and figuratively). Especially within the past few years, I treat every monochromatic image very differently—how I shoot, what kind of exposure I am using, how to deal with light, how I am printing the work, what kind of paper/ink I am choosing to print. It all matters.

AP: As you talk about form, the physical presence of objects used in some of your installations pair seamlessly with photographs. And then you also embrace film, and communicate poetically through that. How do you negotiate that space between photography and other mediums or influences?

MW: I’ve done a lot of work with film—especially these past five years—going back and forth between film and photography. I explore the space between these two mediums. Also sound became very important in my work.

Kheyal, the last film I produced, comes from an Arabic word meaning “to imagine”, or in Bengali, to be “lost in one’s own mind”. This also references the name of a famous Hindustani raga. At the end photography becomes irrelevant and it’s more about what you want to say. The inspiration comes from literature, music, film, and life in general.

MW: Photography gives me the time to pause and think about the world we are living in. Everything is running too fast. We’re running from point a to point b and sometimes that doesn’t make sense. There is a Bengali poem by Jibananada Das with a stanza that roughly translates to:

I don’t want to go anywhere so soon; I have time to walk where my life wants, I have time to sit and wait for a long time. May the excitement of the various stunning successes of life be borne by all others; I don’t feel the need.

That was a very important poem in my life. It encouraged me to really think and give freedom to the things that can be done as an artist. I could run from one grant to another grant but by the end of life, you may win 500 awards, yet not have ten good photographs that will be remembered after 100 years.

AP: That’s so true. Everyone knows Picasso but scarcely anyone would be able to recognize all 50,000 of his estimated artworks. What does it mean, then, to make a lasting impression? When you look at the work of new black and white artists, how are you evaluating their photography?

MW: You learn how to read images after working 20 years like I have. I refined a certain sort of eye and now, when I look at images spontaneously, I can understand how mature the artist’s eye is or what kind of treatment was given to the photograph. I often consider, “was it too much?” There is a tendency of overdoing it because of Photoshop. It becomes easier to make very heavy contrast but also more challenging to calibrate that from your camera screen, to the computer monitor, and finally printed on paper.

For new photographers who haven’t refined that way of seeing yet, they may think a photograph is very interesting but a lot of times it looks shallow; you know, it doesn’t have any depth. So when I look at a black and white image I would like to see a certain form of subtlety in the approach.

AP: If I were to put you on the spot, what is the most memorable black and white photograph that comes to mind right now? How has it bewitched you?

MW: One of my favorites comes from the Mexican photographer, Graciela Iturbide. She has this amazing photograph of a woman (Angel Woman, Sonoran Desert, 1979). She’s wearing a long skirt and her hair is down. One hand holds a cassette player and she is walking in the desert among mountains. Here the photograph has so much poetry and madness. It beckons you to move away from the real world: to see the world outside of your comfort zone. Out there is life.

I can imagine she might be going out to the desert to dance with psychedelic music. There are so many layers that you can read in this image. It goes beyond seeing and beyond photography.

AP: It sounds like the visual and conceptual are both important to you.

MW: Yes, it’s both. At first when you glance at an image, you look at it graphically. You see if it works in terms of composition, light, tonality. And then you see what this image is trying to tell you in terms of content. Is there anything that stimulates something deeper, or is it just a shallow image of a cloud or some lines in the road? For me conceptual rigor and being able to think is very important.

Although, an abstract image can have a really philosophical meaning. Agnes Martin’s paintings are pure form. You can look for hours and see so many things inside. But then you can look at films of Ritwik Ghatak and see both poetics and politics working in tandem through the film. Both are equally important. It depends on what you’re trying to say and what is at the core of the work.

AP: Do you have any advice for those who aren’t entirely sure what it is they’re trying to say?

MW: I think the first thing a lot of photographers are missing is the time to enjoy the magic of the medium. People go too fast. They either come to Varanasi or they go to Kabul. Slow down. Work around the street by your home or in the kitchen. Look for the little jewels laying around that nobody sees but you.

Also, think beyond the medium. Draw more connections with other parts of the world; like cosmology or politics or poetry.


AP: Poetry and magic are two words that emerge again and again. Can you elaborate on what that means to you?

MW: The reason I use the word poetry is because it gives a license to dream and imagine beyond the real world. You can connect all the dots and create new meaning. One can understand the kind of anxiety and suffering many people go through. Something that liberates an artist is the belief that you can reimagine the realistic structures pulling you down. I’m not saying to completely live in fantasy; but art gives you license to see beyond your daily life.

AP: Any final words of wisdom to share with emerging photographers?

MW: It’s just like music. Get into the tune, enjoy the beats and do what your heart tells you. Slowly, slowly—if you have enough patience you will learn how to see the magic.