Book review
Love Me, Turkmenistan
Nicholas Righetti’s new photobook takes a serious/playful look at the ubiquitous shrines of propaganda (and other absurdities) erected throughout Turkmenistan to fuel the megalomania of the evil and demented President for Life, Saparmurat Niyazov.
Photographs by Nicolas Righetti
View Images

According to Wikipedia, Niyazov, a former bureaucrat of the Communist Party of the Soviet Union, ruled Turkmenistan from 1985, when he became head of the Communist Party of the Turkmen SSR, until his death in 2006. He retained absolute control over the country after the dissolution of the Soviet Union. On 28 December 1999, Niyazov was declared President for Life of Turkmenistan by the Mejlis (parliament), which itself had taken office a week earlier in elections that included only candidates hand-picked by President Niyazov. No opposition candidates were allowed.

The book is beautiful, elegant, and almost simple in its straightforward manner. A brief two-page introduction traces this man’s rise from a childhood in an orphanage, to become a modest Soviet functionary, and to evolve again into a fierce, fickle, power-grabbing ruler who even renamed the months of the year after members of his family.

But the best part, of course, are the photographs, and there are lots of them. Waves of amused disbelief wash over you as you turn from page to page to page. Sprinkled in between some photos are one liners that drive home how far gone this guy was: “My people love me so much that I cannot sleep.” In addition to his likeness appearing in monumental statues, painted murals, framed posters and billboards, his face also adorned boxes of spaghetti and bottles of vodka.

While funding extravagant public works projects (a winter wonderland and a large artificial lake), he eliminated pensions and retirement benefits, and closed all hospitals outside of the capital. One wonders what kind of bizarre hell it must have felt like to the 5 million inhabitants of Turkmenistan who cowered under his rule. 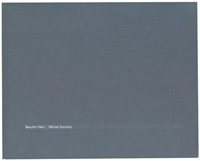