Award winner
On the Ground in Syria: A Photojournalist’s Perspective
Documentary filmmaker turned photojournalist Nish Nalbandian speaks about the importance of narrative, the “flow state” of working in conflict zones and the state of the photo industry today.
Photographs by and interview with Nish Nalbandian
View Images

On the Ground in Syria: A Photojournalist’s Perspective
Documentary filmmaker turned photojournalist Nish Nalbandian speaks about the importance of narrative, the &#8220;flow state&#8221; of working in conflict zones and the state of the photo industry today.

This project was shot in early 2013 and documents life in the city of Aleppo, Syria’s largest city. These pictures were taken during the Battle of Aleppo, an ongoing fight over control of the city.

As the Syrian Civil War drags on and morphs and changes and grows, Nish Nalbandian’s hard-hitting documentary photographs of the conflict continue to resonate more than a year after they were made. Assistant editor Alexander Strecker reached out to Nalbandian to find out more about what drew him to Syria to make these photographs.

I’m a photojournalist and a documentary filmmaker currently based in San Diego. I am a relative newcomer to the world of professional photography. I picked up a DSLR in 2007 just for fun and fell in love with shooting. I took that camera everywhere, just photographing my friends, the events we went to, and all the trips I took.

I feel like I had struggled to find my creative outlet before that, trying to learn to write music, painting, other things. But the process of photography sort of came naturally to me.

I am also a documentary filmmaker. The real notion for me is to tell stories deeply, in a longer format. I’m not as interested in the breaking news cycle as I am in really showing what life is like for people affected by current events, once that news cycle has moved on. I want to create a durable and ongoing record of what is happening, rather than show a transient blip.

Q: Were there any pivotal moments when you decided, when you felt deep inside: “I need to be a photojournalist.”

The pivotal moment for me in relation to my photography was the first day I shot in Aleppo. Before that moment, I really wanted to be a photojournalist, but I only knew it in the cognitive sense—I didn’t ‘FEEL’ it yet.

Once I hit the ground there I really felt like I was in a ‘flow state.’ I was engaged, I cared about what was happening, I felt for the people affected, and I felt, maybe naively, that what I was doing could in some way contribute to doing something good. I just let go, started shooting, and executed my vision for what I wanted to get. It really felt like time was standing still, these moments were presenting themselves, and all I had to do was be there and make the pictures. And during the days and weeks I shot there I made these connections with the people I was photographing. It’s not just showing up and snapping a few pictures. It’s a process of really getting to know the area, the culture, the people and feeling connected to it.

In general, I tend to approach people with my camera down and just talk to them. I have been invited to many meals with people this way. I really care about what people are going through and I think it shows both in my work and in the relationships that I build with people on the ground. I’m not just there to take their picture. I’m there to learn about them, and to show their truth in my photos.

Q: Can you discuss “Aleppo Struggles On” a bit more? What inspired you to take these photographs? What drew you to the subject?

I was drawn to the conflict in Syria by having visited the country before the revolution, having talked to friends in Beirut who had lived through the Lebanese Civil War, and as I was deciding to go pro myself I was watching the coverage coming out of Syria, and envisioning how I would shoot it if I was there. I was curious about how people lived with this war going on around them, as my friends had lived in Beirut. I’d say the major motivation was simply curiosity.

As an American, I always envisioned war as something that happens far away in deserts and jungles and forests. But for these people it was a daily fact of their urban existence, and I couldn’t wrap my head around it without seeing it. That was my first trip.

After that, I knew I had to continue to tell this story, to document what was happening. I paid for the first trip myself and I’d say those pictures were a personal project. Based on my work on that trip, Marcel Saba at Redux Pictures supported me in returning soon afterwards.

The series as a whole reflects what was happening in Aleppo in the first half of 2013. I tried to show a wide range of people, combatants and civilians, life and death, and just paint a picture of what life is like in this urban war zone.

Q: What were some of the most challenging parts about shooting in Syria? For one thing, the news about what’s happening to foreign journalists must have been upsetting…

With the arrival of ISIS in the summer of 2013, things really changed. I, and many others, decided that the risk was just not worth it. Many, many of the foreign journalists stopped visiting Syria that summer. I find this very difficult to process, because I know people who are still there, working and fighting and living, and I really would like to continue to tell those stories.

Before the threat of ISIS became too great, there was still great difficulty in shooting inside Syria. First of all there are logistics challenges you needed to overcome in order to work safely. I adhere to the Frontline Freelance Registry’s code of ethics, and I always perform a detailed risk assessment and prepare a detailed security plan. I carry special insurance that covers you in a conflict zone as well as gear insurance. It’s always been a good idea to be under the aegis of an armed group, sort of like an embed, for protection. Only once you have arranged all of that should you think about going in.

Q: What are your thoughts about the internet and contemporary photojournalism?

Well, I’m fairly new at this. I feel like there are a large number of outlets for writing and photography these days, but a lot of low-paying and non-paying ones are distracting people from high quality stories and photos. I’d like to see more long-form sites that draw people in to a real narrative.

Q: I have heard photojournalists describe their work not as a profession, but a way of life. How do you feel about this statement?

I know lots of people who are getting assignments to go shoot overseas, so I don’t buy the argument that photography as a profession is dead. I think there is an even greater demand for images now. And what makes good images is the same no matter what the technology: The intention behind the photograph. Why did you make that photograph?

I view photography (and documentary filmmaking) as a way to live my life curiously. As a way to explore the world around me and learn about people in widely varying subcultures and geographic regions. So yes, it does seem like a way of life. That being said, I am still working hard at the profession part.

Editors’ note: Nalbandian has just released his work in a handsome publication, done by Daylight Books. 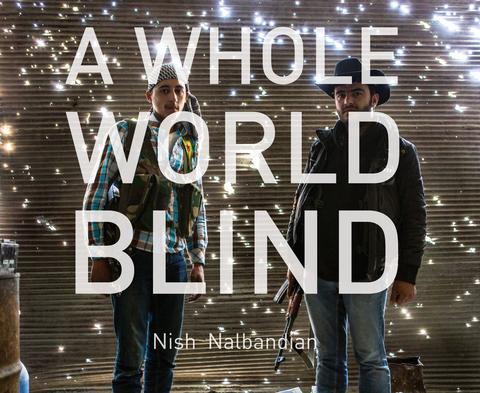