Book review
Buzzing at the Sill: Gazing Into America’s Dark Future
In the long photographic tradition of trying to understand America comes this urgent new work, which looks head-on into the country’s deepening fractures.

Buzzing at the Sill: Gazing Into America’s Dark Future
In the long photographic tradition of trying to understand America comes this urgent new work, which looks head-on into the country’s deepening fractures.

It seems appropriate that I first viewed Buzzing at the Sill during a five-hour flight across the United States. Upon opening the book, Peter barely gives us a moment to breathe before we are underwater in the second image: a crowd of spectators in the foreground observes a clumsy aquatic acrobatics show; four women in swimsuits are suspended in a cyanotic vista, wielding an American flag as it drowns beneath the viewer’s horizon. Buzzing at the Sill reads like a treatise on America seen through the poignant lens of Peter’s critiques and observations upon class and race. Narrower in scope than Robert Frank’s Americans, the book feels like a contemporary twist on that classic work, with strong tones of Jacob Holdt’s American Pictures infused throughout.

Buzzing at the Sill, as Peter explained to me, can be seen as a second volume in what will become an extended series of books. The first, Disco Night Sept 11, looked at the rippling ramifications—both at home and abroad—of the American wars in Afghanistan and Iraq undertaken in the aftermath of the events of September 11th. In Buzzing at the Sill, Peter explores the United States while also following a more personal narrative. His writing alludes to what drew him to seek the life of a conflict photographer; it also weaves through anecdotes that form a diaphanous reasoning with how those wars have affected the United States. The photographs, on the whole, feel like elaboration and evidence; images proving that America is a fractured landscape of disparate cultures and classes.

In large part, the photographs are of two categories: compassionate observations of the circumstances of non-white, impoverished Americans, and less complicated observations—perhaps condemnations—of the culture of wealth. These latter pictures of the affluent (almost exclusively white) mostly feature well-dressed people seen in scenes that might easily draw the disapproval of the viewer.

Throughout the book, there are dense sequences of cultural diversity—almost like a checklist of the political demographics that now make up America: Muslims, Latinos, rich white, rural poor white, and African-American. This book may force many to question their ideas and judgments based on the surfaces of class and race; who is or what is “American”?

Yet there is a deliberate gap in his coverage of America; namely metropolitan scenes and the middle class. Maybe the latter doesn’t exist anymore. The book could well convince someone who may not know otherwise. And maybe Peter was prescient in knowing, as we have learned from the recent elections, that the well-off constituents of these urban centers are no longer as important in determining the future of America as we once believed. Also, perhaps Peter is imploring us to see that the America beyond city centers, and the unseen urban poor, may be the America that deserves greater understanding and more attention. It’s evident that Peter believes this is the America that most directly suffers the emotional and economic blowback resulting from engagement in foreign wars. He sees these photographs as “the imprint of those wars on this society.”

Process is an essential part of understanding this book. Peter is drawing upon 10 years of orphaned images from documentary projects, assignment work, and his ongoing street photography to build his thesis. While creating the photographs, he didn’t have a preconceived notion of the endgame. Rather, he curated Buzzing at the Sill from careful reflection upon the themes that arose in his work over this time period. The writing thereby becomes the glue that helps us bind his thesis together. At times, the disparate sourcing of his images may force us to pause a bit longer in order to bridge the stylistic gaps. Many images draw from a literal and classic documentary-style, while others are more lyrical and establish mood through symbolism and color associations. But after viewing the book, which beckons many returns, I find that the images and the text do gather into a coherent and deliberate narrative, especially on repeated viewings.

Peter carefully considered the craftsmanship of this volume. The book is an object in and of itself. The revealed Coptic binding is sandwiched in between two cardboard-colored boards. The diminutive size and preciousness of the object places the viewer in an odd space of vulnerability when confronting the unsettling realities that lie within. The 9” by 7” size is paradoxically small for the emotional and political intensity of what is housed in its pages.

It’s no surprise to me that Peter has drawn his title from Theodore Roethke’s writing; the original Buzzing at the Sill is a poem that is dramatic and piercing, like Peter’s photos. Yet Peter’s words—descriptive, well-chosen and autobiographically narrative—demur to the intensity of his photographs. The title, a reference to the poem, is a reminder of what exists on the other side of the window behind which much of his audience sits—at a great distance from his subjects. As I close the book, his final photo and his last written sentence are powerful and urgent warnings that peril looms imminent in his future; and as Americans, most likely in ours too.

Reviewer’s note: Peter and I met at the Coffee Shop in Union Square in New York City to talk about his book. He washed down his slice of whipped-cream-topped cherry pie with a Red Stripe lager. I had an herbal mint tea. 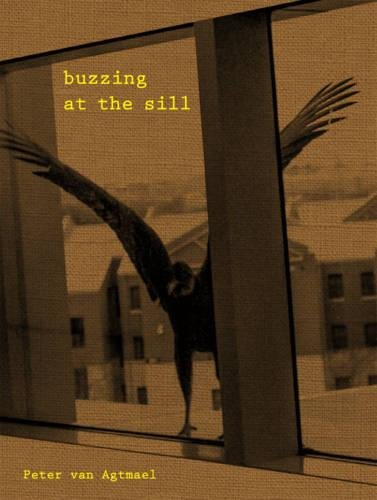 Buzzing at the Sill
by Peter van Agtmael
Publisher: Kehrer Verlag
Hardcover: 192 pages
On the outskirts of New Orleans, Louisiana. 2009. Hunting rabbits with BB guns. © Peter van Agtmael / Magnum Photos
Pine Ridge, South Dakota. 2011. While on a road trip with my friend Justin, we met a couple of guys and started chatting. They invited us to check out a spot where they had a rope swing, and on the way we picked up some beer. Dusk was falling and it became a little party; we lit a fire while some of their younger cousins swung over a deep chasm, with just a thin rope around their waist to secure them to the tree. As the beer ran out and the night began to get colder, they invited us back to their home. Upon arrival, their sister (the matriarch of the family) smelled their breath and became furious. She asked us what possessed us to give them beer. She told us there was rampant alcoholism on the reservation and declared we were just another in a long line of white men exploiting the Lakota. We were filled with tremendous shame and apologized profusely. As she explained the history of the tribe she mellowed and invited us to spend the night. We awoke in the morning to a beautiful dawn and the youngest children tending to the horses. © Peter van Agtmael / Magnum Photos
New Orleans, Louisiana. 2012. A Second Line parade. A local African American tradition where brass bands—known as the first line—march in the streets and are joined by members of the public—called the second liners. The Second Line parades came about after the Civil War because insurance companies wouldn’t cover ex-slaves. So African Americans formed benevolent societies and clubs that helped members defray health costs. The dues included a band for funerals and a public parade every year. Over time, their popularity evolved, and now there are parades almost every Sunday in New Orleans.   © Peter van Agtmael / Magnum Photos
Louisville, Kentucky. 2015. Kentucky Derby aftermath. © Peter van Agtmael / Magnum Photos
Maryland. 2015. The KKK had boasted that dozens from their Klan chapter would attend the rally and cross burning, but there were only a few people when we showed up, including a British TV crew and a freelance photographer. After a few vague excuses, the six or seven Klan members changed into their robes and began a show amongst themselves. One of the leaders started his speech. He shouted that there were ISIS training camps being created by the United Nations with FEMA (Federal Emergency Management Agency), whose fighters would then take Americans' guns away. This plan was allegedly hatched by Barack Obama (or Barry Soetoro as he was called by the Klan. Soetoro was the surname of Obama’s stepfather, and that he was briefly called Barry Soetoro in elementary school in Indonesia has been used as evidence that Obama was not born in America). After finishing, the hoarse-voiced Klan member burned the UN flag and stomped on it, to the tepid cheers from the small crowd. © Peter van Agtmael / Magnum Photos
Brooklyn, New York. 2010. The Fourth of July. © Peter van Agtmael / Magnum Photos
After dinner at Lyniece’s house. Detroit, Michigan, 2012. © Peter van Agtmael / Magnum Photos
Buzzing at the Sill. Designed by Peter van Agtmael and Kehrer Design. Hardcover with open spine. 160 pages + 32 pages booklet, 72 color illustrations. © Peter van Agtmael / Magnum Photos