Recollections
This retrospective of photography by Philip Jones Griffiths is a big, beautiful book that looks at life in Great Britain from the 1950s through the 1990s.

Philip Jones Griffiths (1936-2008) is best remembered as one of the most influential photographers of the Vietnam conflict. He photographed the Vietnam War beginning in 1966, as a member of the Magnum Photo Agency. He subsequently published three books with powerful and compelling anti-war themes: Vietnam, Inc. in 1971, then Agent Orange: Collateral Damage in Vietnam in 2004, and Vietnam at Peace in 2005.

Time Magazine called Vietnam, Inc. “the best work of photo-reportage of war ever published”, and The New Statesman wrote, “Of all the hundreds of books about [the War,] this is the truest, the most important, the most upsetting.”

Recollections, which was published in 2008, offers a rich counterpoint to the war reportage, and provides a wonderful retrospective of Griffiths’ photographs of Britain in the 1950s onwards. These pictures can stand in good company with those of his friend and colleague, Henri Cartier-Bresson. With an uncanny sense of composition, timing, and point of view, Griffiths photographed coal miners in Wales, the Beatles in Liverpool, soldiers in Northern Ireland, and anti-war protests on the streets of London. Griffiths’ pictures depict everyday life and landmark political events over three decades of change and upheaval in Great Britain.

Tony Benn, a politician who often shook things up in the British government, was so moved by this work, that he wrote a personal letter of thanks to Griffiths. He said:

”Recollections will rank, I think, alongside your Vietnam pictures… It is a very important book because for me, and everyone of my age, it is a chronicle of a period of history which may seem far away but which led to ideas of great importance for the future…

“It must be some comfort to you to know that your work will outlast all the speeches and posturings of politicians with their spin doctors, and will reveal more about the arguments of our times, than you can get from leading articles or BBC programmes.”

Yes, he saw a lot in his lifetime, and served as a compassionate witness and a conscience for a generation. This is a lovely book. 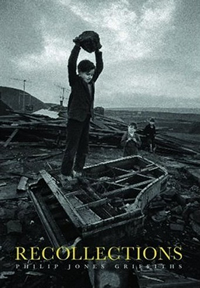