Interview
Photos from Beirut and Boston: Womanhood Across Borders
Lebanon and America are a world apart—or are they? Portraits of young women that traverse perceived boundaries of nation, religion, status, and more.

Photos from Beirut and Boston: Womanhood Across Borders
Lebanon and America are a world apart—or are they? Portraits of young women that traverse perceived boundaries of nation, religion, status, and more. 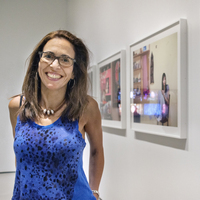 The girl sits on a large bed, leaning back against the headboard with her legs pulled up against her chest protectively. Tucked between two deep purple pillows that dwarf her frame, she stares into the camera. Her gaze is open and guileless, with a tinge of awkwardness and self-consciousness hovering below the surface.

Despite the personal nature of the image, which was shot by Rania Matar in Beirut, Lebanon, only five years ago, this portrait brought me up short. It rang like a bell inside my consciousness. Like many of Matar’s photographs, the image is quiet, unassuming: a moment and individual caught in time.

The portrait reveals so much about its subject in a simple format—and yet, at face value, I have little in common with this girl. So why, I wondered, did I feel such a strong, visceral connection to Matar’s subject? I am no longer 13; Lebanon seems like a world away from where I was raised. And yet, as I sat down with Matar on a rainy Wednesday afternoon in the suburbs of Boston, it quickly became clear that this tug I felt, this familiarity, was intentional. For Matar, my reaction was evidence that her series is “working”; that it affects her audience the way she hoped it would.

Matar is the first to admit that her photography was not always so directed. Initially trained as an architect, Matar switched fields and became a serious photographer in 2001. Before that, she says, she was focused on her architectural career and taking photography workshops when she could. The turning point came in the fall of 2001: “After September 11th, I wanted to tell a different story about the Middle East. Up until that point, I felt that I was living the American Dream—we had bought a house, we were raising our children. But then, all of a sudden, my sense of identity as a Lebanese/Palestinian woman became so, so strong. I didn’t know how to identify anymore. So many people were saying ‘It’s them or us,’ and I started thinking, ‘Well, where do I fit in? I’m both!’”

At first, Matar started photographing in Palestinian refugee camps in and outside of Beirut. Her early work was more documentary in style. The series from this period, “Ordinary Lives,” was shot in black and white, and focused primarily on the children and mothers in the refugee camps, as well as people (primarily women) going about their daily lives in the rest of Lebanon. The images from the refugee camps often feature evidence of hardship or war: yawning, craggy openings in houses made by rockets; walls pockmarked with bullet holes. The rest of the project is populated with more mundane, quotidian subject matter: a veiled woman in Beirut listens to her iPod, or a group of women gaze over a balcony at the sea.

In all that work, she found herself focusing on portraits of women. “At one point, I was showing someone my photography, and they said ‘Where are all the men?’” She laughs. “Up until that point, I hadn’t thought of my work as female-focused. I never said ‘Oh, I’m focusing on women.’ I’d say, ‘I’m focusing on the Middle East, on Lebanon,’ but that interaction was the moment when I realized how much I wanted to focus on women. Even though we lived very different lives, I felt connected to the women in the refugee camps—I related to them. The sense of womanhood and motherhood bonded me to them; it was stronger than the condition of whether my subject was Lebanese or American or wore a veil or chose not to.”

This stark division between war-torn landscapes and daily life faded quickly in Matar’s subsequent projects. As she transitioned to her next project (and from black and white to color), her style became more fixed. In “A Girl and Her Room,” a series Matar started in 2009, she photographed young women in their bedrooms. Again, she included girls from both the US and Lebanon, but here the boundaries started to blur. Subtle differences are there—yes, a few of the photographs still take place in refugee camps, and some walls bear the marks of conflict. And yet, there are also photographs that are difficult to place. Is this Beirut or Boston? One girl’s bedroom in the refugee camp has bright walls of yellow and green—not so different from an image taken that same year in Cornwall, New York.

As Matar refined her style, slowly, even subtly, her work began to take on new meaning. As she started to dive deeper and deeper into the American and Lebanese cultures of girlhood and womanhood, the feelings of familiarity grew stronger. “I had started this project in the US, and as I photographed some of those young women, I started seeing myself in them. Even though I grew up 25 or 30 years earlier, in another country, and in another culture, I realized that I was exactly like the girls I was photographing. It was a revealing moment for me, because it wasn’t about photographing the Middle East or the US anymore—it was about photographing the traits we all share.”

These commonalities get to the heart of Matar’s subject matter. After years of photographing women and girls in both cultures, she started to draw distinct parallels between her subjects in the two countries. In the years after 9/11, the series became increasingly personal—and also political. So much of the content produced by Western media about women in the Middle East focuses on aspects of their lives that are alien to people in the US. This frustrated and saddened Matar to no end. Her series “L’Enfant Femme” (which focuses on pre-teens), “Becoming” (teenage girls) and “Unspoken Conversations” (images that pair teenagers with their mothers) are, in part, a reaction to this feeling. “When I looked at my photographs of women from these two countries, I saw so many parallels” Matar told me. “This is not something I talk much about in my writing, but it is something I thought about a lot as I shot these series. We hear so much about the difference between the US and the Middle East, but instead, I saw so many similarities.”

This is why my initial reaction to Matar’s work pleased her so much. When I first looked through her photographs, I was immediately struck by how strongly I identified with her subjects. It went beyond aesthetic pleasure to an emotional bond; I saw parts of myself in those girls, regardless of nationality. When I challenged myself to name that recognition, I found that the way they held themselves—delicately, but also awkwardly, as if they weren’t yet sure how to arrange their limbs—resonated with my own experience as a young woman. Their postures communicated an insecurity that, to me, is symptomatic of that age, a moment in life when you see the silhouette of a person you could be, but there remains a space between your inner self and that outline. You feel as if you can’t quite expand to fit into the body you were given.

When I mentioned this to Matar, her reaction was warm and immediate. “I’m so glad to hear you say that. For me, it’s important that women can recognize themselves in my work. We live in a very polarized world right now, but girls around the world are growing up and experiencing similar feelings, the push and pull, and it’s important for me to portray that.”

The girls and women that Matar photographs in “Becoming” and “L’Enfant Femme” are between the ages of 9 and 17. In addition to the swirling emotions that take hold during this period, it is also a time of distinct physical change. All of Matar’s series on women explore periods of transition—the stages of adolescence, female middle age—and the passing of time. All of these shifts, whether emotional or physical, are experienced by women around the world, despite any perceived barriers of nationality or religion. Matar went on: “I thought to myself, well, you know what would be great? If people could look at my work and start seeing themselves in someone they thought of as ‘other’ or ‘different.’ My aim was to show our universality, our shared humanity. Maybe if more people saw themselves in one another—maybe if we start relating to each other as human beings with shared experiences—the rest won’t matter as much.”

A combination of Matar’s projects on womanhood will be exhibited in a solo show at the Amon Carter Museum of American Art in Fort Worth, TX, in an exhibition titled In Her Image. The show is curated by Joy Kim, who noted that ”Together these four series offer a powerful image of how female identity is shaped not only over time but also across cultures.” It will be on view until June 17, 2018.

If you’d like to see more of Matar’s work, check out our previous features on L’Enfant Femme and Unspoken Conversations.