Book review
Alter Ego: Avatars and their Creators
Photographer Robbie Cooper traveled the world to meet the “real-world” people behind their own cyber characters from online games and communities like Second Life and World of Warcraft. The result is a book of wonderfully eclectic dual-portraits, plus illuminating and intriguing...
Photographs by Robbie Cooper
View Images

Alter Ego: Avatars and their Creators
Photographer Robbie Cooper traveled the world to meet the &#8220;real-world&#8221; people behind their own cyber characters from online games and communities like Second Life and World of Warcraft. The result is a book of wonderfully eclectic dual-portraits, plus illuminating and intriguing interviews with these gamers from all walks of life.
For anyone interested in pop culture phenomena, I think this book is a must-read.

First of all, let me confess, I have never played an online game, nor participated in chat-rooms, or even purchased anything on eBay. I don’t even enjoy analog games like Monopoly or Charades. But, after reading Alter Ego, Avatars and Their Creators, my mind has opened with amazement and respect to the thriving existence of online virtual worlds that I had wrongly thought were simply silly, violent, cartoon-like eye-candy distractions populated by people who had nothing better to do with their time. For the most part, it seems, the reality of virtual reality is far more complex and interesting.

The book looks simple and fun, smart and savvy – and it is! The cover itself is one of those plastic lenticular double photos that switches as you tilt it back and forth. One way, it shows a real-life portrait of two people in a city. But tilt it slightly, and the “real” people morph into their alter ego avatars in a virtual environment they have chosen to inhabit with millions of other players.

After a quick but erudite introductory essay by Julian Dibbell, (printed in large type), I was already fully engaged and ready to soak up more insight. Over 10 million players worldwide? Virtual co-branding deals with Coca Cola China, and annual revenues in excess of $1 billion a year — in real money! Real sweat shops in East Asia with hundreds of paid gamers earning points and skills and cyber possessions to sell (for real money) to less agile or impatient players. Real world real estate investors switching to cyberspace because the real estate market is more lucrative online?!! These are not all antisocial geek nerds; many of these are people are finding purpose, meaning, and livelihoods in completely fabricated worlds.

The true insight and understanding comes from the 62 profiles of the gamers themselves. As the publisher, Chris Boot, says, “Alter Ego explores the personal and social identities being shaped in the metaverse at the beginning of the 21st century. Portraits of online gamers and virtual-world participants from America, Asia and Europe are paired with images of their avatars, with profiles of real-world and virtual characters. This book is both an entertainment and a serious look at a phenomenon that is shaping the future of human interaction.”

Each spread of the book features a brilliant portrait (by photographer Robbie Cooper) of a gamer on one page, mirroring a portrait of the gamer’s alter ego on the facing page. We get basic info about each real person: age, occupation, number of hours per week they “play” online, etc. Then, we get heart-felt first-person accounts based on interviews with each player by Tracy Spaight. Coupled with the photos, these personal accounts provide a richness of detail and honest psychological insight to each of the players and how they relate to, and value, their alter egos.

There is also an essential, intriguing glossary in the back of the book. Two examples:

MMORPG: an acronym for ‘massively multiplayer online role-playing game’, the subgenre of computer role-playing games in which a large number of participants interact with each other within a virtual environment online….

Gold Farming: the acquisition of valuable items within MMORPGs by third parties acting on behalf of other players… Typically gold farmers operate in low-wage countries, sometimes with hundreds of employees, selling virtual items and currency to players who lack the time or expertise to acquire them themselves. The practice is viewed by many within the multiplayer game community as an unfair violation of gaming principles… but is defended by others as a legitimate element of game economics…

I recommend this book. 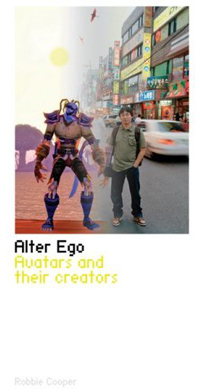