Interview
From the End of the Analog Era to the Enduring Wilderness
After photographing the implosion of film-photography institutions across the world, Robert Burley turned his lens to a new subject and a new question of impermanence: the disappearing wild spaces around us.

From the End of the Analog Era to the Enduring Wilderness
After photographing the implosion of film-photography institutions across the world, Robert Burley turned his lens to a new subject and a new question of impermanence: the disappearing wild spaces around us. 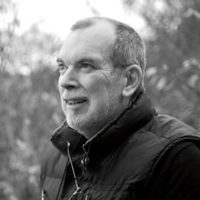 As an artist working in photography, Robert Burley has sought to describe and interpret the built environment in which he lives. He is also interested in the history of the photographic medium itself, especially as it is the principal means through which he engages with the world.

Among other projects, Burley spent 10 years traveling the globe, looking at the destruction of film-based photography institutions, many of which had stood for over a century: Kodak, Polaroid, Agfa, Ilford, and others. His most recent project, “An Enduring Wilderness: Toronto’s Natural Parklands” (ECW Press, May 2017), explores the urban green spaces, river valleys and nature within the city of Toronto.

Burley’s photographs have been extensively published and exhibited and can be found in numerous museum collections around the world. Writer and art critic John K. Grande spoke with Burley about his work in this wide-ranging interview—

JKG: Isn’t it interesting how things are less framed in photography today?

RB: We are now living in an era where once ubiquitous light-sensitive film and papers have moved into the realm of artist’s materials. And photography has begun to hybridize and interface with other media in new ways. The act of making a photograph is less conscious than it used to be: it is much faster, not as deliberate, and less methodical. All of the technological limitations and barriers that were once so much a part of my work (and the medium as a whole) have disappeared. For me, the process of making photographs, and the incredible new opportunities provided therein, have required a major rethink of the medium that has been my life’s work.

JKG: Your recent project, “The Disappearance of Darkness: Photography at the End of the Analog Era,” was very well-received. In it, you documented the disappearance of an entire industry: Agfa-Geveart in Belgium, Kodak in Rochester and Toronto, and Ilford in the UK.

RB: Like everyone else, I could see that the march of new technology was going to impact the way I made photographs. In 2005, I discovered they were going to close down the Kodak plant in Toronto, a major site of 18 buildings. This industrial complex had played an important role in my city’s history as well as in the history of photography. One day I asked them: “Is anyone going to photograph this before it disappears?” They replied: “No, go ahead.” The real surprise was that they let me photograph wherever I wanted. That was a big change, because this industry had always been so proprietary and secretive.

I began to think that the future of this industry did not look too promising, and I wondered how it would affect my work. I initially thought this branch-plant closing was just corporate downsizing and my project would stop in Toronto. But two years later, I was photographing the scheduled implosions at Kodak Park in Rochester, New York. The first one was on July 4th, 2007 (Independence Day in the US). They tried to use the implosions as a marketing opportunity for their new inkjet printers. They had giant banners hanging from the buildings: “Nice Day for a Revolution.” I tried many times to get into Kodak Park in Rochester and they always said “No.” At one point, I spoke to a Vice President who made it clear that I would never get in.

JKG: After you photographed Kodak’s demise, you went on to Europe to witness similar closures at Agfa-Gevaert in Brussels and Ilford in Manchester (UK).

RB: All these companies have histories that go back at least a century. After about 1950, there weren’t any significant innovations in the manufacturing of film-based media, so the companies made the same product for a long time. While I was photographing, no one seemed to be aware how quickly the transition was happening. To believe that Kodak would go bankrupt in 2005 was unthinkable. But it all changed in the blink of an eye, leaving artists wondering whether film would be available in the future. Today, Hollywood is the only reason colour film is still available and the motion picture industry will soon be done with film too. I hope that black and white films and papers will continue to be available. Ilford appears to be the only company capable of maintaining quality in this shrinking market.

JKG: Speaking of which, your more recent project is “An Enduring Wilderness,” a series that you just completed on Toronto’s Natural Parklands. This work is a kind of reawakening, an action and project designed to increase public awareness of the green spaces in Toronto: the city’s sunken valleys, tree-lined ravines, and shoreline. Your book and project awaken us to the distinctive landscapes and environs in Toronto…did your awareness of the land in a city change as you worked on the project?

RB: Landscape historian and writer John Stilgoe has suggested we’ve tuned out the natural world in the digital age, and this is especially true in large urban centres where most of us now live. This book is an exploration of Toronto’s extensive natural park system, but I feel it also addresses a human need created by a nature-deficit we are all collectively experiencing today. Though my computer now offers me untold virtual riches about anything and everything, it was my camera that allowed me to renegotiate my own relationship with nature in the 21st century. It remains the device that forces me to pay attention and become aware.

When my photography is combined with the physical act of walking, I can eliminate distractions and see my surroundings on a very personal level. I think this solitary, mindful and subjective experience has always been a part of picturing the landscape, whether it be with oil paint, silver salts or data; and under these conditions, I know I have the best chance of making compelling images. For me, this project not only reawakened my understanding of nature in the city where I live but also the self-awareness that inevitably came with exploring these spaces.

JKG: Both the image and what photography represents are changing…images are available to us all through Instagram, Facebook and other sources. How do you see this transformation and our relation to the physical world through an increasingly virtual, photo-feed-world?

RB: For me, the most interesting phenomenon has been a global flood of photography and how this has changed our relationship to the world around us. While photographs have become the glue that hold the virtual world together (especially social media), we have somehow become more distanced from the people, places and events we see in these images; I think mostly due to a state of addicted online distraction.

To some degree, making “An Enduring Wilderness” was a kind of antidote to this state of mind. It took me away from my glowing screens and forced me to be in the woods or along the shoreline by myself. Once back in the natural world, I could use my (digital) camera to be present in one place at one time. This is crucial for me to make meaningful “still” photographs.

A world traveller from childhood, John K. Grande lived and studied in Sri Lanka, Norway, Switzerland, the UK, and Canada. His reviews, interviews, and features have been published in a range of magazines including British Journal of Photography, Arts Review, Artforum, la revue Espace, CIRCA, Vice Versa, Arte.Es, Sculpture Magazine, Public Art Review and Border Crossings. He has curated numerous exhibitions both in Canada and abroad.