Book review
Liberty Theatre
After the devastating Charlottesville riots of 2017, Rosalind Fox Solomon returned to her decades-old photographs of the American South, realizing her symbolic images resonate today just as much as they did when she first clicked her shutter release.

Liberty Theatre
After the devastating Charlottesville riots of 2017, Rosalind Fox Solomon returned to her decades-old photographs of the American South, realizing her symbolic images resonate today just as much as they did when she first clicked her shutter release.

In the 1960s, one hundred years after the official abolishment of slavery in 1865, the American South was still heavily divided by race. Jim Crow laws and state-sponsored ‘separate but equal’ segregation created and upheld a climate of severe social disadvantage for African Americans. These laws were enforced until they were overruled by the Civil Rights Act of 1964 and the Voting Rights Act of 1965, but the impact of codified segregation left its imprint on American society and culture, the effects of which are still felt to this day.

Touching on the legacy of these important issues, the photobook Liberty Theater is a collection of artist Rosalind Fox Solomon’s photographs of the legally desegregated (but still racially divided) South. Fox Solomon started shooting in her early forties, making the images in Liberty Theatre between 1970 and the late 1990s. She also studied with legendary photographer Lisette Model in New York City, and one of her first serious projects was a visual documentation of the outdoor market around Scottsboro, Alabama’s Courthouse Square, where the infamous 1931 trial of the Scottsboro Boys took place.

Her new monograph opens with still life photograph of belt buckles. It’s a symbolic image of redneck Americana, brass stamped with emblems of the white rural South: the KKK, the Wild West, and Miller Lite. The image is directly followed by the title page, which simply reads “Liberty Theatre,” a reference to an old cinema in East Chattanooga, Tennessee—a movie house owned by Fox Solomon’s husband’s family, open to “non-whites only” between 1930 and 1964. “There was a fire that destroyed the theater in the early sixties,” reflects Fox Solomon. “The Liberty Theater was an odd name for a segregated theater.”

Broken dolls were among Fox Solomon’s earliest subjects, and after the initial belt buckle plate and title page, the photo sequence opens with a haunted-looking white woman—horror doll-like in a frilly bonnet with unblinking eyes and a frozen smile. With one square monochromatic image per spread, Fox Solomon’s story unfolds, manifested in portraits of people and scenes of the post-Jim Crow South—memories of antebellum Dixie alongside a possible future of integration and racial harmony.

Most of Fox Solomon’s pictures seem diligent and fair, but unlike some of the artist’s more open-ended work, and unlike the work of Diane Arbus (to whom she is often compared), the pictures selected for Liberty Theater all seem to be saying something specific. In this case, it’s something about race and class in the South. It is as if each photograph is a symbol—sometimes crystal clear, like we see in an image of a black man, his face badly beaten. But then sometimes the message is abstract—a skinny white woman, mouth hanging open in suspicion, her dishwater-blonde hair in curlers. There’s a broken iron gate in front of a plantation house; a black couple standing straight as columns in their shipshape living room; black people with musical instruments, dressed in their best for church, fishing; and white people suntanning, getting highlights in their hair and smoking cigarettes at the beauty shop, holding guns, dressed in American Civil War garb playing with Confederate soldier figurines.

Not without some irony, Fox Solomon’s point of view is unmistakably subversive. The photos seem to make the case that race relations in the South are a dysfunctional folly that no mere acceptance of humanity or enforcement of Civil Rights law can easily fix. In an exchange over email, Fox Solomon explains, “I was more hopeful in the seventies that conditions would change, not only in the South, but throughout the USA. And changes were dramatic. The pictures in Liberty Theater span several decades, but despite sea changes, we are still coping with injustice and bigotry. After the events in Charlottesville, I compiled a large collection of my Southern images and began editing and sequencing the book.”

In addition to darker themes, there are also moments of peace and harmony, as seen in an image of a white man and a black boy sitting together, eating ice cream cones. This calm coexistence is also displayed in images of interracial couples—a man and woman sitting on a sofa together, and a biracial same-sex couple laying naked in bed. But mostly, and to an almost absurd extent, Fox Solomon acknowledges the institutional pain of black people, celebrating their dignity in the face of hardship. She points out the foolishness and cruelty of the white elites, as well as the casual racism and oblivious mindset of working class whites who lost social status after integration.

To this end, Liberty Theater is full of incriminating evidence: a white man watching a black woman dance topless in a strip club; a white man holding a doll in what looks to be KKK mask and robes; a derelict plantation house held up by Doric columns in need of white paint; a black woman sitting in a chair, weeping into her hands; and rich whites in tuxedos, their faces hidden by paper fox masks. “Fox is my maiden name,” says Fox Solomon. “For me, the masks are an outer veneer that cover what is hidden and unspeakable.”

Struck by this pile of proof, I asked the photographer if every picture could have the same basic, tongue-in-cheek caption. Something like, “Slavery is over, Jim Crow is over, everything is okay now, except it’s not.” She replied, “No, because that was not my point of view at the time. I was excited about potential change. The Civil Rights Act of 1964 led to many changes. I am not putting words into the mouths of my subjects. I sequenced and edited with no planned framework, creating rhythm and meaning as the book came together. There is no resolution. My pictures elicit more than one interpretation. Sequences add complexity. The absence of text enables this.” And so, the sequence of photographs is followed by thumbnails with basic captions, only further contextualized in the essay “The Play of Freedoms” by Stanley Wolukau-Wanambwa, which appears at the end of the book, after the reader has engaged with each image.

Now 88 years old, Fox Solomon is still making work on a regular basis. She’s still diligent, still shooting black and white, and still conceiving her pictures within the square. Currently preparing for a project in Manhattan, she’s already had her equipment checked and is making tests to be as prepared for the work as soon as possible. “The square is a stage,” she writes. “And I work freely within it.”

Editor’s Note: Liberty Theatre was recently selected as the photobook of the month by Charcoal Book Club, an incredible platform and resource for photobook lovers around the world. Check out our interview with founder Jesse Lenz here, and be sure to check out the Charcoal Book Club web shop and monthly subscriptions for incredible deals on beautiful books. 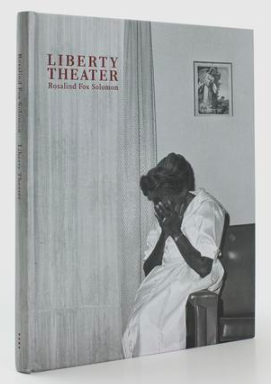