Interview
Cinematography: From Still to Movie
The award-winning Polish cinematographer talks about the tremendous importance of still photography in creating his movies — especially his film, Ida, shot in luscious black-and-white.

Photographs by and interview with Ryszard Lenczewski

Cinematography: From Still to Movie
The award-winning Polish cinematographer talks about the tremendous importance of still photography in creating his movies — especially his film, Ida, shot in luscious black-and-white. 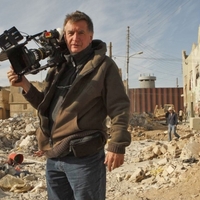 Note: This interview was originally published by LensCulture in 2014, and the inspiration conveyed in the conversation is timeless.

Polish cinematographer Ryszard Lenczewski has had a long and successful career in cinema: over four decades, he has worked on almost 100 films in 32 countries. He has been nominated for and won awards not only in Poland but also in the United Kingdom and the United States.

But before he began working in film, Lenczewski wanted to be a photographer. After learning the rudiments of the darkroom during a job at a printing house, he began shooting on his own. He was soon winning local photography competitions and dreaming of a career in the field. But in communist Poland at that time, a career in photography was hardly possible — there were no magazines, no advertisements, no fashion. He determined that the best way to get behind a camera and make images was to become a cinematographer.

Lenczewski never abandoned his roots however. He continues to photograph to this day and feels that photographic stills are an essential part of his practice. The stills above were taken as preparatory sketches for his latest, award-winning work for the film Ida. LensCulture’s Alexander Strecker reached out to Lenczewski via telephone to find out more about his visual approach.


LC: You describe how photographing is like “sketching” for you — a way to help you prepare your cinematographic shots. Is this standard practice among cinematographers? How did still photography become such a large part of your professional method?

RL: During one of my first movies as a cinematographer, I was working with a difficult director. We were having trouble communicating, especially about how the film should look. I knew he was very precise and words were failing us. So, I dug up my old camera, a Praktica and began to scout locations on my own. As soon as I showed him prints, we found it easier and easier to communicate. Eventually, the stills became a storyboard for us and set the tone for the entire movie.

Shooting still photography not only gives me a way to communicate with directors in a straightforward, visual manner but it also gave me a lot of independence. Films are very collaborative projects but when I scout locations, I can go on my own and snap photographs as I please.

LC: Ida has a very distinct visual style. For one thing, it was shot in black and white. How was that decision made?

Given that the film takes place in the 60s, during a time when everything in Poland felt black and white, it was natural for the movie’s look to fit the era. Before the shooting began, I had the chance to talk with the director Pawel Pawlikowski on many occasions. By watching old movies together, from many different countries, we began to formulate a vision of how Ida would be shot.

Of course, things didn’t really become clear until I started shooting my still photographs. Early on, we were driving through the countryside and I said “Stop, stop, this is it!” I got out of the car and photographed the panorama. This became the first impression of the movie and set the tone for how we thought about the film. As I photographed more, I found loneliness, sadness, nostalgia — in other words, I found the aesthetic and feel for the whole movie.

I ended up taking around 3,000 photographs. These became the basis for the film’s storyboard, for the divisions of the scenes. In every movie, the script plays a large part in dictating the pace and structure of the movie. In this case, the photographs were just as important as building blocks.

In fact, when we won the Golden Frog [the top prize] at the The International Film Festival of the Art of Cinematography, the second place winner complained that it wasn’t fair: we hadn’t shot a film, we had only made still photographs.

LC: Indeed, your cinematography feels so photographic — are you influenced by any photographers?

Much of cinematography is about lighting — so of course I look to photography for inspiration! In the 1970s, when I was in film school, there was a French photographer with Polish roots named Jeanloup Sieff . Many of his photographs were shot outside, on cloudy days. He also preferred late autumn and early spring, when the trees were almost completely barren. When he would shoot inside, he used only one source of light. His work became our inspiration for lighting Ida.

Irving Penn has always been a big influence. Some visual impressions from his photographs remain with me to this day: a shape, a curve, dark characters in front with light backgrounds. I always have such images in mind when I work on lighting; I am always highly conscious of the relation in light between the main character and the background.

Finally, Cartier-Bresson is my master. He was able to catch ordinary moments while finding something metaphysical within them. In my house, I have a darkroom. Hanging in the darkroom is a poster of a guy jumping over a piece of wood. I’ve had this poster for years and years — I had to buy it in Belgium and bring it back to Poland during the Communist era.

LC: How do you feel about film versus digital, both in cinema and photography?

For my photography, I shoot with a small Rx-100 digital camera. I need my camera to be easy to take on the move. For filming, I think I finished with film stock about ten years ago. For example, with Ida, we originally had the idea to shoot digitally and then transfer to film. When I looked at the digital print, it looked perfect — there was no reason to transfer. And considering the consistency of digital projection versus the inconsistency of film projectors, it really seems like a no-brainer.

What I’m more worried about is digital compositing. In that case, you really start to remove the actors from the real world. I hope that digital compositing can be used in a sensitive, careful way. But in the end, it’s OK — we have new brushes, but we are still painters.