Interview
Mundane
Both bewitching and sinister, these staged photographs take a contemplative approach to the news stories of gruesome violence that reach Bangladesh’s headlines every day.

Mundane
Both bewitching and sinister, these staged photographs take a contemplative approach to the news stories of gruesome violence that reach Bangladesh’s headlines every day. 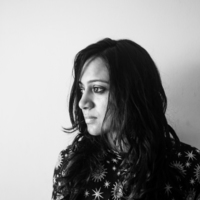 “We are learning, every day, how much we can express and how much we should not,” says Salma Abedin Prithi. She is speaking of the daily barrage of stories she reads in Bangladeshi newspapers, spilling out gruesome and dehumanizing details of social violence. A man is beaten by his neighbors after complaining their music is too loud. A mother is murdered by a local mob suspecting her of kidnapping while she visits a school to inquire about admissions. A child is lynched by thirteen men after being accused of stealing a bicycle.

Prithi’s series, Mundane—its title prodding at how commonplace these hostile incidents have become—explores the psychological effects of living in a society entrenched in violence. The work came into being after a colleague of Prithi’s was murdered in 2016 in an attack during Bengali New Year celebrations, allegedly fueled by political motivations, though no one can say for certain. She speaks of having dinner at his home and then experiencing the shock of his sudden death which she read about in the newspaper.

During Prithi’s first career as a television news anchor, she couldn’t find a space for personal expression. It was only when she took the camera into her own hands that she felt the real power to tell a story. In doing so, Prithi has created a body of work made up of nearly fifty images, split into two distinct streams that work in conversation with one another. Black and white photographs, harshly lit and capriciously surreal are paired with waxed photographs extracted from newspapers, collaged with textual erasures, sourced from the same.

Experiencing the work in this manner is not dissimilar from listening to Billie Holiday’s Strange Fruit (1939) in which she hauntingly croons of public lynching. The viewer is lured into Prithi’s sequence by bewitching visuals, and then repulsed once their symbolism is understood. It may be difficult to make it through this body of work without allowing time to process. Even for Prithi, trauma is a word she uses to describe her own experience during the darkest moments of creation. Two gloves, no bodies, hold a rope in one of Prithi’s imagined tableaus. A child’s naked foot protruding from a sack is the nightmare of reality.

She compares her approach to a dream. “Have you ever been sure of a person’s identity in your sleep, yet watched as they take on different appearances or forms? They look different but are the same. It’s like that.”

In 2019, Salma Abendin Prithi was selected by the Magnum Foundation as one of their Photography and Social Justice Fellows — “nine early career photographers, artists, journalists, and activists who are passionate about challenging injustice, pursuing social equality, and advancing human rights through photography.” Prithi was interviewed by Amy Parrish for LensCulture. Here is an edited version of their conversation:

Amy Parrish: This series seems both simple and incredibly complex. There are so many layers to work through. Can you describe how you’ve approached this work?

Salma Abedin Prithi: I wanted to photograph the psychological conditions present during the time of social violence, which is a sensitive topic. I collected factual content in the form of newspaper clippings but I used collages of the original text in a provocative way to shake one’s conscience. My staged photographs borrowed the actual events from newspapers and create an imaginary, suspended moment in time where its characters are going through a psychological experience. The bodies of victims play an important role in expressing agony, or working towards healing the situation with a performative gesture.

AP: Can you share a bit more about how these two streams of visuals work in tandem? At what point in the process did you decide to pair your compositions with extracts from the news?

SAP: The news archive and staged photographs try to bridge the ‘real’ with ‘imaginary’ to create a psychological experience of these stories. The pairing was never planned precisely and I organically started collecting the clippings first. At one point during the collection, I had growing concern over the complexity of each of these events which have many more layers than what we see in newspapers. I decided to re-construct the moments with those layers that we often overlook in such intense situations—the conflicting moments of hatred and affection, rage and solace.

AP: It’s intriguing that you take such a straightforward approach to the ‘imaginary’ images, using the descriptive qualities of flash photography, yet there are elements of expressionism applied to the ‘real’ news clippings. It almost feels inverted from what one might expect.

SAP: I wanted to transform the actual news images with a symbolic gesture of commemoration. I am critical about consuming images of violence with the gaze of otherness. My main audience for this work are the communities of this society who are concerned about their reality and growing social violence. Most of them share collective memories of each of these events. I wanted to express a layer of condolence within this archival section. I melted wax and poured it on the photographs. This extra layer with wax hides the details but amplifies the mood of sorrow.

AP: Can you touch on the significance of the performative qualities to this work? I understand you also worked, at times, with local actors. What were those interactions like as you photographed each scene?

SAP: The performances in my photographs were quite organic as I did not arrange any rehearsal, script, storyboard, or any other illustration. I need an intimate environment, and preferably accidental moments, to explore the unexpected, which often works better than a planned approach. I photograph in my home where I have converted my living room into a studio. All the characters of my photographs are ordinary people who are close to me and the rest are film extras, who were often unemployed as the Bangladeshi movie industry is shrinking.

I want total comfort in my studio to open up my ideas, and vice versa. I don’t strictly instruct the people I photograph towards any one scene; I start by sharing my idea but also listening to their response as well. They are free to push it further and experiment and take a chance for the unexpected. But of course, I design the props and environment to expand the real story and stay relevant to the moment of incident.

AP: What kind of reflections about violence emerged from this project for you? What do you hope your viewer takes away from this work?

SAP: There is no easy solution to mitigate violence from society but an artist should not stop talking about it. For me, it is always important to investigate psychological conditions of ordinary people when they become part of these unexpected events. Knowing the mindscape of the vernacular is important before we propose a prevention. My approach is a continuous search for the layers where I have found a lack of sensitivity or empathy in the masses. We have become anesthetized by the news of violence and there should be an innovative way to evoke our feelings against crimes. The work is a testimony of such events and also a shared empathy with the viewers to remember these incidents.