Interview
Lingering Ghosts
These direct, honest portraits reveal how refugees in the UK face excruciatingly long waits to be granted asylum—while in this endless limbo, their identities become slowly yet painfully effaced…

Lingering Ghosts
These direct, honest portraits reveal how refugees in the UK face excruciatingly long waits to be granted asylum—while in this endless limbo, their identities become slowly yet painfully effaced… 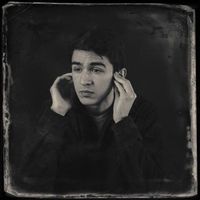 What does it mean to be an asylum seeker in the United Kingdom?

Once in the UK, these people find themselves in a state of limbo. They have to await an answer to their application for refugee status; they thus become the “Lingering Ghosts.” These physically scratched portraits attempt to convey the cruel loss of self and frustration that befalls them.

Despite being represented without their eyes, these people do have an identity. We recognize them as fathers, mothers, sons and daughters—human beings, after all.

Samuel Ivin’s work offers a contemplative take on this condition, away from the glaring lights of the media.

LC: “Lingering Ghosts” seems like remarkably brave and direct work to produce while still in school [Ivin was in his second year at the University of South Wales, Newport (USW)]. Looking back, what gave you the confidence to take on this sensitive project in such a forward manner?

SI: My confidence was gradually built up throughout my time at university; when the students around you are producing high-quality work, it makes you want to push your boundaries too. The Documentary Photography course at USW gives you a lot of freedom to explore different topics and there was never any judgement.

My initial reason for exploring this area was to find out who these “asylum seekers” were. When the UK Border Agency was abolished in 2013, there were a lot of headlines on the subject. But I wanted to know who these individuals were and why they were in Britain.

I did some initial research—I visited a migration detention center near Heathrow airport and found a couple of refugee drop-in centers nearby. Drop-ins are placed for regular meet-ups, where asylum seekers and refugees go to socialize, learn new skills, and seek advice. I proceeded to visit these centers regularly, particularly one in Cardiff. I spent a couple of months there meeting people and volunteering. The more people I met, the more I realized how deeply asylum seekers are affected by the excruciatingly long waiting periods after they apply for refugee status. During this period, asylum seekers have no ability to work or travel; this leaves them with nothing to do and no idea what their future will hold.

Sometimes they will spend years in limbo with no purpose or way or contributing to society. It’s an extremely frustrating and depressing situation to be in. This situation and the unnecessary bureaucracy made me angry. I wanted to explore the topic and shed light on the situation. Those were my main motivations.

LC: Can you describe how you settled on the project’s visual approach? It’s so distinctive—was it a flash of inspiration or a gradual realization?

SI: I originally wanted to create passport-style portraits with video interviews, but I quickly realized that it wasn’t working. People were not comfortable having their faces shown, and it didn’t communicate how the long periods of waiting affected the asylum seekers.

I ended up playing with Photoshop and found that scratching communicated the loss of identity and confusion asylum seekers felt.

When I picked up the project again in 2014, I knew I needed to experiment with scratching physically, but at that point I was focused on finding people and photographing them. At that point, the Italian communication center Fabrica approached me about producing a book, and they also suggested making the scratching physical. I did some tests, and it ultimately gave the work more weight. I discovered how scratching someone’s face out can be quite disturbing—but it really communicates the asylum seekers’ loss of identity .

The idea of creating work from a destructive process interested me too. The latest pieces in the series were produced by scratching c-type prints using sandpaper and a Stanley knife. It’s helpful to think back to the person’s situation or personality as I go about it, although often the main inspiration comes from instinctively scratching on smaller prints and planning from there. Some of the images have a ghostly, faded quality, while others are more deliberately “scarred.”

LC: Lots of powerful work has been produced about the refugee crisis all across Europe and the world. What do you hope your series will add to the conversation? What do you hope viewers will get out of this work?

SI: When I started “Lingering Ghosts,” I wanted the portraits to highlight what an inefficient and harmful process the UK asylum system can be and to share the affected refugee’s stories. I also wanted to ask questions and raise awareness: How should we represent refugees and migrants in the media? How many refugees should a country take? How do we integrate refugees into our communities ? It’s a vast issue—probably the defining issue of our time—so it’s important we all form opinions and discuss it intelligently.

Now, regarding other work, I agree there’s been a lot of insightful projects done on the refugee crisis over the past couple of years. This is important because it keeps the conversation on refugees going. But our work does need to evolve. Last November, I read an essay by a writer and former tutor of mine, Colin Pantall, in which he explored how documentary photography can fail asylum seekers. He wrote: “It’s as if it’s a taboo to say anything remotely negative about people who are undertaking these epic, tragic migrations, as though all of them are saints. It’s demeaning, as it reduces them to absurdly romantic stereotypes.” I’m probably guilty of doing this.

When you want to help people, it’s tempting to refrain from showing any of their flaws, but that can actually end up being patronizing. In the future, I hope my work will be able to tell the whole story.

LC: You were quite diligent about submitting your work to prizes, festivals and competitions—MIFA, Magnum, Magenta, PDN, BJP…What have you learned from this process over the past 2-3 years?

SI: Yes, I have entered a lot of competitions. Once or twice a month I would sit down and enter as many competitions as I was eligible for. Many of them wouldn’t come to anything, but occasionally my work was awarded, which was a big help for getting the project noticed.

For example, Fabrica found my work after I was a winner in a Magnum/Ideas Tap 30 under 30 competition. This led directly to the final series of prints and publication of a “Lingering Ghosts” book. Which is to say that exposure can be very helpful!

But I would also say to be mindful which competitions you enter. There are some rip-offs out there too. If a competition is charging you €70 for the chance of “winning a medal,” stay away. Weigh the pros and cons. It’s good to get your work out there, but remember you’ve put a lot of time and effort into it. Make sure you get something in return.