Interview
Empire
“A place overexposed to light, with people underexposed in the media…” An up-and-coming documentary storyteller takes us to the deserts of Libya and shows how powerful connections can be made between photographer and subject.
Interview with Samuel Gratacap
View Images

Empire
&#8220;A place overexposed to light, with people underexposed in the media&#8230;&#8221; An up-and-coming documentary storyteller takes us to the deserts of Libya and shows how powerful connections can be made between photographer and subject. 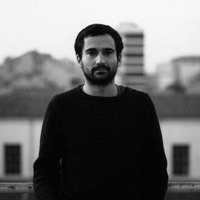 Choucha was a refugee transit camp located in southeastern Tunisia, 7km from Libya and 25km from the city of Ben Guerdane.

Established in February 2011, it hosted several hundred thousand refugees in transit during the Libyan civil war and the NATO attacks. While Libyan refugees were welcomed by Tunisian families or temporarily settled in Tunis or Remada (a camp), the refugees of Sub-Saharan origin fled to Choucha.

I first travelled to Choucha in January 2012 as a photographer accompanying a reporter. Confronted with the rules of short-term reporting, I faced the complex realities of the camp as well as my own difficulties in rendering an image. As a result, I decided to write up a project proposal and returned to Tunisia in July 2012 in order to start a long-term multimedia project.

At the same time, I also volunteered for the Danish NGO Refugee Council, working on a project that addressed the psychosocial activities and education in Choucha. I taught an introductory course on analogue photography (“memory-tool”) to 16-18 years olds over the course of five months.

Over the course of an entire year, I became as close as possible to the people in the camp by being present and observant. I analyzed the impact of the temporal and topographic factors of their dwelling places which—originally temporary—had become perennial. 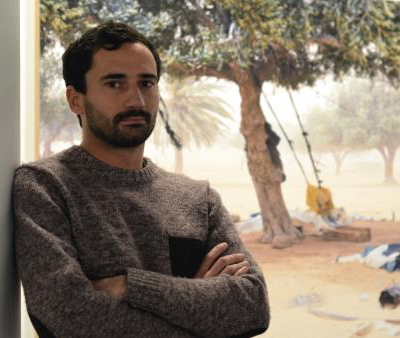 LC: You called Choucha “a place underexposed to media and overexposed to light.” What were your visual impressions when you entered the camp for the very first time?

When I started photographing, I wasn’t sure what I wanted to show. I had no clue about the life inside the camp: how they got food, water, humanitarian aid. I wanted to understand how a human being—another person—could deal with such circumstances. And so in the first two months, I made very few pictures…

The numerous images of the people with their faces covered were actually taken late, during some severe sandstorms. One thing that is not necessarily obvious from my still photographs is that the wind never fades. It damages the tents, whips sand around and gets into everything: the food, the tents, the folds of people’s clothes…

LC: Beyond that, can you describe your stay in the Choucha camp? During your time there, how were you received by the refugees? How did they respond to you taking their picture? Did they still believe media could change something in their situation?

SG: At first, I think people were quite open to speaking with the media—they still believed that the media could change something. When I arrived first in 2012 and introduced myself as a photographer, some of the people were telling me: ”Reporters and photographers came a year ago and we are still here, stuck in the middle of the desert. What are you doing here? What are the politicians doing?”

That was just the first emotional reaction—a demonstration of what the people were going through. But to truly understand what the refugees dealt with while they waited, you need to stay and wait yourself. It took me two years to make a project, and for about one year of that time, I lived between the city of Ben Guerdane and the camp.

LC: The peculiar atmosphere of “Empire” shows your great ability to shoot very intimate and personal moments while maintaining a well-defined distance from your subjects. How did you manage to keep this balance in the long term? Were there times when this balance was challenged?

SG: I arrived in Choucha with many questions and I left with many more. In the book, co-published by Le Bal and Filigranes, I decided to put testimonials of the refugees as well as my own writings about the experience at Choucha. The writing reveals aspects of my time there that I couldn’t reveal efficiently through photographs. For example:

The connection to time is no longer the same, the days are pointless. The sand destroys everything and cracks the fabric of tents that are too fragile. Choucha officially closed in June 2013, and around three hundred people remained there with no food, no water, no electricity…

The families and some of the people who have been “rejected” left the camp at the beginning of 2014. They went back to Libya to reach Italy by sea. “Three years in Choucha, and you end up transforming yourself into an old man,” Amidou once said to me. Some have gone mad. “God is strong”: these words echoed in the camp. Men are also strong, those who do not give in, nor give up. “Not even a quarter of an hour,” Omar, a young Gambian once said to me. “If there was security in my country, I would not have stayed here in this camp, not even a quarter of an hour.”

LC: While in Choucha, you gave introductory photography courses to the refugees. This allowed you to stay in the camp and at the same time offered you a new perspective on the refugees’ lives. What was their reaction to your teaching? What did they photograph? What did you learn from this that you couldn’t have otherwise?

SG: I needed a reason to stay there as a photographer (it’s a military area, after all). Thanks to the photography workshop, I had an excuse to be present every day in the camp. I was supposedly teaching photography to adolescents—but in reality I did not teach them anything. All I had to do was provide them with traditional photography supplies and then they were off and running from there.

Still, my access and authorization to make photographs only gave me access to a part of the story, a fragmented reality. So, I started drawing a map, as if to apologize for being there. I wanted to depict this part of Tunisian territory that would certainly never be found on any map, ever. A place of life created from nothing: just a road and endless sand…

LC: Anything else you would like to share from your time there? A particularly impactful story from a refugee, for example?

SG: I think this short text can offer a powerful testimony to one individual’s experience there:

Choucha: the result of the war in Libya. That is what makes us move and, of course, we are not happy, but as long as we don’t have any options, we can’t leave. That’s why you can see many people here, including me, because we are still looking for a better place to rest our head and keep on going in life. Everybody has his own dream and his own mission. Different things happened in Africa which I don’t like: I saw brothers kill each other. Nobody cares about it and our leaders don’t care about it. I am still dreaming to become a musician. Some situations tried to bring me down and writing helps me to save my head. When I found myself in the desert, I started singing and trying to give myself the force to continue. My musical life is growing despite the fact that I haven’t found a place to rest. No studio but a pen and paper.

I keep walking: “I’m mister nobody, living in desert not groovy” for almost two years. The picture of our future is sleeping in our tent, and no one wants to see it, no one wants to know. I believe that one day my message can contribute enough for change. We deserve help. I’m really tired of seeing people suffering. We are living in the jungle and the jungle is a place where you can’t really find freedom. Instead, you see people suffering, so many tears, so many pains. That’s the jungle. My everyday life inspiration is born there. I got a lot of inspiration in the jungle. You’ll find your place here for lot of reasons. Choucha is like the jungle because nobody is born to stay in it.” By S.D.