Award winner
Maggie
A gut-wrenching photoessay on the awful dynamics of domestic abuse—and also a profoundly intimate portrait of a woman’s quest for a measure of peace and solace in the world.

Maggie
A gut-wrenching photoessay on the awful dynamics of domestic abuse—and also a profoundly intimate portrait of a woman’s quest for a measure of peace and solace in the world.

Sara Lewkowicz is one of the 50 best emerging photographers for 2015, as named in the LensCulture Emerging Talent Awards. She was also one of the eight “jurors’ picks.” Here is her winning entry and artist’s statement. Below, you can also read an interview and learn what made her work so special in the eyes of the jury.

Domestic violence is a largely invisible crime. We usually only hear it muffled through walls, and we usually only see it manifested in the faded yellow and purple bruises of a woman who “walked into a wall” or “fell down the stairs.” It is rarely limited to one event, and it rarely stops.

My project, “Maggie,” seeks to portray domestic abuse as a process, as opposed to a single incident, examining how a pattern of abuse develops and eventually crests, as well as its short- and long-term after-effects on victims, their families, and their abusers. 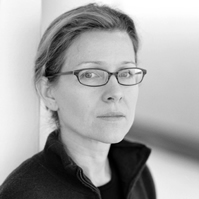 Though ostensibly an essay about a victim of domestic abuse, Sara Lewkowicz’s lacerating portrait of “Maggie” seems to inadvertently capture the day-to-day experience of two young children as they try to adapt to difficult circumstances. Lewkowicz’s profoundly intimate photographs demonstrate her talent for insinuating herself into her subjects’ lives, while eliciting thought-provoking questions about her role as documentarian, as well as ours as witness.

LC: Can you talk a bit more about the evolution of the project—I can’t imagine you ended up in Maggie’s kitchen on the first night…

SL: I first met Shane, actually. I was at a local fair and from the moment I saw his tattoos, which were incredible, I went up to him and asked if I could take a picture. It all developed from there.

Now, at that point, I didn’t know it was going to be about domestic violence at all. I was originally doing a story about recidivism, which is what drew me to Shane in the first place (since he was an ex-convict).

The project changed fairly quickly though. From being about Shane, the photographs soon began to focus on them as a couple and then them as a family. In November, just two months after meeting them, I was at their house for the evening. That was when the domestic abuse incident happened in Maggie’s kitchen. After that, the story took a wholly new turn and Maggie became my sole subject. More recently, it’s shifted again, since the children have become the center of attention.

LC: This project has taken many twists and turns—has that been a challenge for you?

SL: I read the book, ” The Art of War,” a long time ago, and in it, Sun Tzu writes you have to have a plan but you also must be ready to abandon that plan quickly. I think that’s a great metaphor for approaching stories. You have to do research, you have to an idea but you also have to be prepared for the story to not be what you wanted it to be. Otherwise, you’re just on your own agenda and you might be missing what’s actually in front of you. You have to be kind of like water.

In this story, the key moment was when Shane attacked Maggie—obviously, that changed the complexion of my work dramatically. But there were also many smaller moments along the way that I was able to pick up on because I kept following the story over a long period of time. For example, I was with Maggie in May, and she has a new partner and she’s pregnant. I’m planning to go to her baby shower and will try my best to fly out for the birth.

LC: Does this project now feel indefinite in your mind? When does it end?

SL: I hope it doesn’t! I’ve known Maggie for three years now and I feel Im always going to be connected with her and the kids. Even if I’m not shooting the story with publication in mind, I’ll keep shooting it for myself. Since, after all, when I first started shooting the project, I didn’t have any idea it would be published…

LC: The project is ongoing but it also had a distinct form as a story of domestic abuse. In that light, what do you think it accomplished?

SL: I received a lot of emails from women who had survived their own experiences with domestic abuse. And they were consistently very thankful that someone was telling their story. I would call it a success based on that alone—totally independent from whatever other attention it received.

For example, I had one woman write to me and tell me how she had kicked her husband out of the house recently, since he had been emotionally abusive. She had been thinking about letting him back but after she saw my story, she told me, “I realized that whether I died because he beat me to death or because he emotionally battered me so badly that I ended up killing myself, the outcome would have been the same. But I’ve decided not to let him come back. Don’t ever doubt the pictures you take have an impact and help people.”

SL: Photography didn’t come easily to me, though I have always been a visual person. Even though it was a challenge, it was also a compulsion. A real compulsion. I tell people that if you can see yourself doing anything other than photography, do that. If you think, “Maybe I’ll be a photographer or maybe I’ll be an accountant”—go be an accountant, seriously. You can have photography in your life as a hobby but it’s just too hard of a profession to make a living in, so don’t do it unless you really have that compulsion. For me, it’s the only thing I ever knew with certainty that I wanted to do. I didn’t fall into it by accident, I was obsessed with it.

LC: Is it a relief to finish a very emotionally charged project like this or is it hard to move on?

SL: I wouldn’t know because it’s not finished! I haven’t even considered that possibility yet.

Now, there was some relief during the period when this work was winning awards and I was receiving recognition. On the flip side, I didn’t get to make much work. I didn’t have the time to actually produce stuff. I didn’t have the space in my brain to think about new projects.

After all the fuss and attention, there was also a very slow period. This was a whole different problem. I had graduated with my degree and for a few months, no one was calling. At that point, I hit a patch when I just couldn’t shoot anything. It was like writer’s block. I thought, “Well, what do I do now?” It felt so bad that I couldn’t make anything happen.

Luckily, one of the people I had photographed once told me, ” Feelings aren’t facts.” That’s become one of my mantras when I get stuck in a headspace. It’s so helpful for convincing me that if I feel bad, I won’t feel that way forever.

SL: The real question is, “How long does it take to emerge?” It wasn’t long ago that nobody knew who I was and nobody cared about my work. I only graduated in December! I only had my first real assignment in January. Thanks to the awards that “Maggie” received, I had a big start but I haven’t fully emerged by any means.

There’s an idea that winning an award magically makes you an established photographer. That an award guarantees you’ll get all the work you need and you’ll never feel nervous or lonely or stuck. That’s just not true. There’s a huge difference between having done a single piece of work that people noticed and being a photographer who has proven, time and time again, that they can deliver. It’s only when you’re in the second category that you’ve really made it. I’m definitely not there yet.

One thing I’ve learned is that making comparisons to others never helps me. For example, sometimes I look at my friends and from where I’m sitting, it looks like they’re doing amazingly. That has been hard for me, especially when I’m in a period of not being productive. But that struggle is about me, not about them. I found that making comparisons with others is like sitting in a rocking chair—it gave me something to do, but it wasn’t getting me anywhere. I need to focus on myself if I want to keep making great work. The only constant is change so I might as well keep moving forward.

Shane, an ex-convict and a recovering drug addict, had been trying to make a career as a singer in a Christian rock band while providing for Maggie and her children. He said finding steady work that paid a living wage was tremendously difficult, as he was required by law to report his status as a convicted felon. © Sara Lewkowicz
A trip to the barbershop designed to provide a moment of male bonding for Shane and Kayden couldn't resolve the tension between them. © Sara Lewkowicz
Memphis Bell-Sharp, 2, sits in her car seat, watching her mother's boyfriend, Shane. While Shane's relationship with Memphis was decidedly less confrontational than his relationship with her brother Kayden, he still found his new role as caregiver to two small children to be challenge to his patience. "I'm just trying to do the right thing by them," he said. © Sara Lewkowicz
Maggie and Shane took a rare night out alone together, singing karaoke at a local bar. © Sara Lewkowicz
Shane flung Maggie back into the kitchen when she tried to escape. He told her, at one point, that she could either get beaten up in the kitchen, or come into the basement with him so that they could talk alone. Maggie refused to be alone with him, saying she was fearful of what he might do without witnesses around. © Sara Lewkowicz
As Shane and Maggie continued to fight, Memphis ran into the room and refused to leave Maggie's side. Shane continued to scream in Maggie's face as Memphis wedged herself between them. At some point, the toddler had stopped crying and began trying to soothe her weeping mother. © Sara Lewkowicz
A resident of the house called the police, who arrived and arrested Shane. As he was being led away in handcuffs, Shane pled with Maggie not to let the police take him into custody, crying out, "Please, Maggie, I love you, don't let them take me, tell them I didn't do this!" © Sara Lewkowicz
Memphis stood in front of an illuminated advertisement at the Port Columbus International Airport, waiting to fly to Alaska with her mother and brother to be with her father. Memphis' father is a soldier who is currently stationed in Anchorage. Maggie decided that trying to reconcile with her estranged husband would be best for her and her children. "I want us to be a family again," Maggie said. © Sara Lewkowicz
The decision to move to Alaska was made quickly after the incident, and Maggie and the children moved into an apartment with Zane within a month. The couple had limited funds and the children slept on a futon together for their first several months. © Sara Lewkowicz
Kayden and Memphis play superheroes on the couch in the living room. © Sara Lewkowicz