Interview
Zukunft (Future)
“Sometimes you have to go far away to be able to see again”—a German photographer returns to her roots and delves deep into her country’s complicated, wartime past in order to gain some insight into the future.

Zukunft (Future)
“Sometimes you have to go far away to be able to see again”—a German photographer returns to her roots and delves deep into her country’s complicated, wartime past in order to gain some insight into the future. 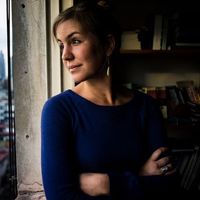 Editors’ Note: Photographer Sarah Pabst has spent the last three years working on her project “Zukunft,” an examination of family history, personal history, and national identity in the still-reverberating aftershocks of World War II. “72 years later, the traumatic experiences of this period are still present in Europe. In Germany in particular, this legacy took the form of guilt in post-war generations; they’re ashamed by the events and their place in history.” As the grandchild of Holocaust survivors, Pabst and her work traverse that history. We interviewed her below to learn more—

LensCulture: How did you conceive of this project? Is is a subject you stumbled upon, or did you set out to pursue the topic directly?

Sarah Pabst: I think it was a mixture. On the one hand, I was already working on very personal matters before, like my earlier project Reclusive, which focused on my relationship and the fact that I am living 12,000 km away (in Argentina) from my native country.

During my trips home to Germany, I always stay at my parents’ house, so I started to read my grandmother’s diaries again. She passed away in 2008. I also stumbled upon a box of photos that my grandfather took during World War II and I started to feel the need to document my family and our history.

As I discovered, sometimes you have to go far away to be able to see again. In my case, I needed the distance from my home in order to see the beauty in these surroundings, the familiar faces of my family that change subtly with every month.

I always asked myself, “What if…” What if I had been living in the same time as my grandmother? What would my life have been like? Photography helps me to reduce the distance between us, to preserve the faces of my family, and lately, to deal with pain. My brother is in some of the photos. He died very unexpectedly, of a sudden cardiac arrest a year after I started the project. When I took his photograph, I didn’t know that so soon I would experience the same pain as my grandmother, who lost two of her brothers during the war. It’s something that words can’t explain. I try to work on this pain through this new project, and it helps, but it will take me a long time to come to terms with it…

LC: You mention that part of WWII’s legacy is the guilt felt by the next generation. How does this guilt manifest itself for you or your loved ones?

SP: Every history book you open, every documentary you watch, reminds you of the horrors of war. When I read the testimonies of survivors, I still can’t believe how many people were capable of such cruelties. The efficiency, the logistics [exemplified by the Nazi operations]…these are all “typical German qualities.” How can you not feel guilty or ashamed that your country was able to do that? So many people participated. Although my family’s story is different, for many years I wished I had a different nationality.

I remember the FIFA World Cup that was held in Germany in 2006. The streets were full of people from all over the world. Everybody was waving their flags, wearing their national colors…that’s a recent movement. I remember my father saying a while ago that it disgusts him to see people hanging the German flag. Then slowly, slowly, we started to feel liberated, to distinguish between history and a simple game of sport.

LC: You mentioned finding the box of photographs that were taken by your grandfather in the war. Did those photos offer you any new understanding about your grandparents’ experience? How do they shape your understanding of the war?

SP: I was most of all surprised by the everyday occurrences represented in many of them. When we think of war, we think of bombs and destruction—and those parts are definitely a part of it. But in the middle, there are people trying to live a normal life. Even pictures of soldiers sometimes have these banalities: we see them playing card games, sitting on the loo, building a Christmas tree in the snow.

My grandmother’s diaries also mention normal daily routines. But then, slowly, you see war taking more and more of a leading role. It starts to leak into her writing until she barely writes anymore; around this time, my grandfather also stopped taking pictures. I only know the horrors that followed through their stories.

LC: Why was it important for you to include vintage images in this project?

SP: There are two different kinds of vintage images in “Zukunft.” The shots of bombs are taken from a book I found about World War II on the streets in Buenos Aires: it shows the bombing of Germany and its allies. The rest are photos taken by my grandfather.

The photos led to who I am now, so they are a crucial part of the project. They help me to understand the present, and they are also a reminder for the future. We always say, “These cruelties can’t happen anymore, it’s in the past,” but if we look at our present, there are so many dangerous things happening: Trump, the increasingly right-wing orientation in Europe, the tens of millions of people who have been forced to flee their homes. My grandmother used to say that people laughed at Hitler in the beginning—well, they are laughing at Trump as well. The past is a reminder for the future, and we are the ones who are building the world for our children.

The photos are also an indication of the casualties of life. My grandparents only met after the war: my grandmother was engaged to another man in ’44, but he never returned from Russia; my grandfather was sentenced to death and freed by the American army. I owe my existence to a mere split second. Life is fragile.

LC: You manipulate your photographs by placing yellow dots on the images—over the faces of some of the soldiers and also among bombs being dropped from the sky. Can you talk about your decision to include this outside influence?

Similarly, there is also a very interesting biological phenomena present in all humans: the blind spot in our eyes where the nerve fibers route before the retina. The lack of light-detecting photoreceptor cells in this particular spot makes the corresponding visual field invisible. Our brain fills up that missing spot with information from the other eye, so we usually don’t even notice it. As such, the yellow dots are the blind spots, the holes in my memory, the lack of information that we fill with our own experiences while looking at the photos.

LC: Finally, can you give some background for a couple of the contemporary images in the series? For example, the shot of the covered mattress, or the yellow and black house with two windows lit at night? Why did you choose to include them?

SP: Most of these images come from my thoughts and memories. The wrapped mattress is a result of a dialogue with my older sister: she used to have the same nightmares of war as me, but we never knew that we both had these dreams until I started the project. In her childhood dreams, she tried to hide under the bed from the soldiers. When I stumbled across this mattress, I knew it would make the photo that resembles her story.

The house is the house where I grew up. It is 300 years old. Houses and landscapes see so many things, and they very often survive us. During Nazi Germany, this house was used by high-ranking officers. Afterwards, it stood empty for many years. The first thing my father did when my parents started renting it was to cut the flagpole out of the garden.

All of the images have their own stories, but mostly I want the viewer to make up their own while looking at my photographs. We all come at pictures with our individual emotional backgrounds—that moment when you don’t really know the reason is where it becomes interesting. You fill that blind spot with your own feelings and history.

Editors’ note: Pabst’s series will be exhibited at Organ Vida International Photography Festival in Zagreb from September 4 - 9, 2017. The festival, now in its 9th edition, will showcase an impressive array of emerging work alongside renowned talents.

If you’d like to learn more about Pabst’s ongoing project, you can visit her personal website for her full artist’s statement.