Interview
Town Boy
A 15-year collection of ordinary moments plucked from the flow of time, sensitive to the slow pulses and rhythm of the photographer’s hometown in South India.

Town Boy
A 15-year collection of ordinary moments plucked from the flow of time, sensitive to the slow pulses and rhythm of the photographer’s hometown in South India. 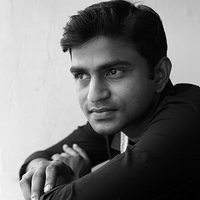 A green insect resting on a wall, a showering of fireworks at night, a group of girls reaching flowers from a tree, a friend smoking a cigarette bathed in blue lamplight: Town Boy is a collection of unremarkable moments carefully plucked from the flow of time. Sensitive to the slow pulses and rhythm of the everyday, Sathish Kumar has been capturing life unfold slowly around him for the past 15 years.

More a state of being rather than an intentional ‘project’, the trail of pictures that make up this beautiful series began to grow after the photographer moved from his hometown of Kanchipuram in the south of India to the hustle and bustle of Chennai. It was there, faced with the frenetic movement of the city, that the slower pace of his childhood became a precious substance—one that he would attune himself to through the lens of a camera.

In this interview, Kumar talks about discovering photography through his family and the joys of roaming aimlessly with a camera and capturing life’s tiny transformations.

LensCulture: I’m curious about your early beginnings in photography. You mention an uncle with a studio. Tell me more. What drew you to the studio and sparked your interest in photography.

Sathish Kumar: My uncle grew up with my parents in Kanchipuram in South India. After his schooling, he moved to Bangalore and later in 1997 he started a commercial photo studio. During my school holidays I used to go to my uncle’s place in Bangalore and spend my free time there. The first time I stepped into the darkroom, I felt it was a very mysterious place—seeing the black and white prints coming out from a small chemical tray was magic for me. I was shown different tricks inside the darkroom, using lights and chemicals while processing film developing and printing. The spark and the sound of the flash lights hitting the umbrella outside the darkroom was also beautiful.

My uncle used to come back to visit my family once a year with gifts. Once, he gave a point-and-shoot camera to our family, and a cricket bat for me. I equally like playing cricket and taking photos. At that time, I wanted to be a sportsman, but I chose photography instead after going to school. My uncle suggested that I move from my town to the city for exposure and to get a college education. My father advised me to choose any course except Engineering, and that’s how I got into a visual communication course for photography in Chennai.

LC: What would you say are the main things you picked up from the studio? What kind of images was your uncle making and what was their influence on you?

SK: My uncle’s name is Ramesh, and he made studio portraits and also shot weddings for the past 21 years as a business. I am proud of him because he is commercially still active, and has worked from the film period right through to the digital era. Unfortunately, he stopped shooting after digital cameras came into the industry around 2005 because he was more comfortable in shooting in analog, but now he hires modern equipped photographers for his shoots and he runs the business.

What I picked up from him was an energy towards life without getting tired and the way he takes care of his family and friends. That’s my inspiration. While I was graduating, he gave me his film SLR camera to practice with. He influenced me a lot and it was down to him that I learned the process of photography.

LC: Shooting your everyday world seems to be at the heart of your practice, since you first got your hands on your point-and-shoot to the work we are looking at today. How has your approach changed from the first steps of your journey?

SK: My journey began with shooting around my hometown. I used to carry my camera wherever I went, mostly on short trips with my friends. Most of them were engineers and had started jobs with a good salary; I was in a position where I had no idea what I was going to do with photography. I got access to the Internet at my home in 2009 and, through this, my approach changed by finding out about various photographers in India and around the world.

In the meantime, I started reading biographies, as well as science and history books. The biographies I read gave me a motivation towards life; I started shooting whatever I liked around me. This was the starting point. Later, I got a job assisting a Chennai-based commercial photographer for a year and learned how to earn a living through photography. More importantly around this time I found about Trikaya Photos, a small photography agency based in South India. Some of the photographers from Trikaya later became my friends and I got influenced by their work.

LC: There is a very strong material quality in your work. Can you tell me more about the way you make your photos? How important is working with analog film for you?

SK: I don’t plan about what I want to shoot. I don’t think too much. Mostly I shoot with an open mind, not bound to anything. My works are an expression of my personal feelings: I just shoot what I love and whatever is special to me to remember. And also, for others to remember. I feel the moment we are living is important and so I record my time through images. I choose to shoot film because it makes me slow down. I love the feeling of film: it takes me back to my teen days.

LC: Let’s talk a bit about your project, Town Boy. How did it first start? How long have you been working on it?

SK: I have never started Town Boy as a work. It happened with time. I just kept shooting my experiences over a period of 15 years and the images in this series are from my teens to this day. The essence of every new experience as I grew up was recorded with my camera: roaming around the neighborhood, meeting family, old friends, most times making new ones. At some point I had to move to a large city for work. As life in the city got suffocating, I began to seek relief by going back to my town or by going on treks, to take a deep breath, to be able to go back to the demands of the city. Town Boy is an observation of this gradual transformation into who I am today. This string of images are about my coming of age, my movement from a small town to a cosmopolitan city. To somehow fit into this contemporary world.

LC: This move from town to city seems to be an anchor event that everything revolves around. It’s interesting that the new environment of the big city was not your chosen protagonist here—rather the slower rhythms of going back to your childhood home. Can you tell me a bit about what drew you to focusing on home rather than your new surroundings?

SK: I feel that time flows faster in the city and most of the people in the city are in a hurry. It does not inspire me. When I travel outside the city I live in, the time flows slow and calm. Meeting new people and places are always such a beautiful experience where I keep learning something new.

LC: The project features photos from your early youth to recent images. How did you relationship to home change after your move? Was it like you were discovering it anew? Can you sense a change in the way you were photographing too?

SK: I sense the feeling of the butterfly effect and the flow of time after shifting to the city. I miss my family because of the distance. It’s a new way of understanding the transformation in my life. While there is a greater appreciation for my hometown in this sense, my way of photographing has always been intuitive and it remains this way even now. I hope my images gives the flavor of South India.

LC: Looking at the pictures, I get a sense of how important the camera is for you in daily life; a way to relate to the things around you. What does it enable for you?

SK: The camera is a time machine that converts my memories and experiences into the physical form of the world around me.