When, in 1909, the color photography pioneer Sergei Mikhailovich Prokudin-Gorskii began his journey to capture all of Russia in color images on behalf of the czar, the scope and importance of his undertaking were clear. Since 1905 he had planned to systematically document the empire with the color photography technique he had developed in order to give all Russians, particularly schoolchildren, a deeper connection to their country. He petitioned Nicholas II long enough that the czar finally provided him with a specially equipped railroad-car darkroom and the necessary travel permits.

Before he commenced what would become a six-year expedition, Prokudin-Gorskii — like most of his contemporaries — had no idea what his fellow countrymen from the distant regions of Russia looked like or how they lived. His color images were not only meant to document the diverse citizens, ethnicities, settlements, folklore, and landscapes of a vast empire, but to create nothing less than a common identity for its populace.

Sergei Mikhailovich Prokudin-Gorskii fled Russia in 1918 in the aftermath of the October Revolution. After traveling through Norway and England, he settled in Paris, where he died in 1944. The United States Library of Congress purchased his work in 1948, but it was only recently laboriously restored. Nostalgia showcases these restored masterpieces of early color photography that are a milestone in Russia’s cultural history.

Regarding the Color Technique

Prokudin-Gorskii used a camera that exposed one oblong glass plate three times in rapid succession through three different color filters: blue, green, and red. For formal presentations, the negative plate was placed in a triple lens lantern so the three exposures could be superimposed to form a full color image on a screen. Due to the brief time lapse between the fixation of the three frames on the plate, the perspective is slightly distorted to a varying degrees on the final image and results in random shimmers of color. 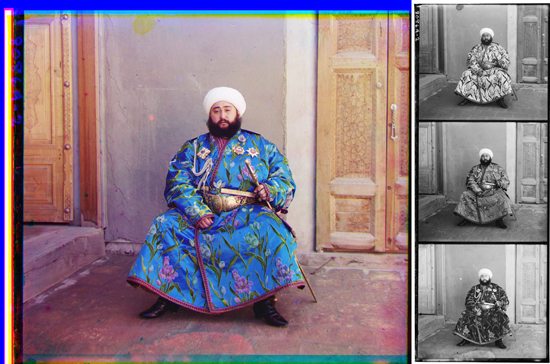 The Emir of Bukhara in a 1911 color photograph by Sergei Mikhailovich Prokudin-Gorskii. At right is the triple color-filtered black-and-white glass plate negative, shown here as a positive. Courtesy Library of Congress and Wikipedia.

The glass negatives in the Prokudin-Gorskii collection were scanned at a resolution of 10,000 pixels on the long side with the short side scaled in proportion. The black-and-white negatives were captured as 16 bits per pixel grayscale files with an uncompressed size of approximately 70 megabytes per file. The dimensions of the original negatives are 24 x 9 cm. The negatives were scanned emulsion side up: the glass side of the negative was placed on the platen scanning surface preventing contact with the emulsion side and protecting it from scratches or damage. The images were then digitally reversed to be right reading. Approximately 5% of the negatives required special handling because they were either broken or cracked. The broken negatives were assembled on the platen for scanning in order to represent a plate in its entirety. 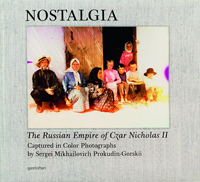