Top Secret: Images from the Stasi Archives plumbs the immense collection of intelligence and photographs once gathered by the Stasi, East Germany’s secret police. Menner spent two years with the Stasi’s archives, which contain some 1.4 million photographs. During his research, Menner realized how “the public has very limited access to pictures showing the act of surveillance from the perspective of the surveillant. We rarely get to see what Big Brother sees”.

East Germany’s Big Brother was big indeed. Almost 300,000 people worked for the East German secret police, per capita far more than were employed by agencies such as the CIA or the KGB. For decades, these agents worked hard at documenting their fellow countrymen, hoping to detect any trace of disloyalty.

Almost anything could be considered an act of rebellion — from displaying posters of Elvis, to owning West German coffee-makers, to passing by the U.S. embassy. These formerly secret, highly official photographs show agents and employees putting on professional uniforms, gluing on fake beards, and staging arrests.

Top Secret, like the agents it depicts, is many things at once. It is a visual processing of German history, an examination of contemporary surveillance issues, and also a darkly funny photobook. But at any point when the photographs appear to be tipping over into the realm of the absurd, of the completely unbelievable, we are reminded that these are real photos of real people who systematically spied and reported on their neighbors and family members.

It is also interesting to note that Menner was completely denied access to the equivalent archives of pictures from British and American intelligence agencies.

These photos might seem farcical when they are safely out in the open and referring to a time and place that feels far away. But they also remind us that there are millions and millions more photographs just like these that aren’t nearly so funny at the moment. Today’s equivalents reside in Big Data storage centers or in a Cloud somewhere in cyberspace, no fake mustache required. 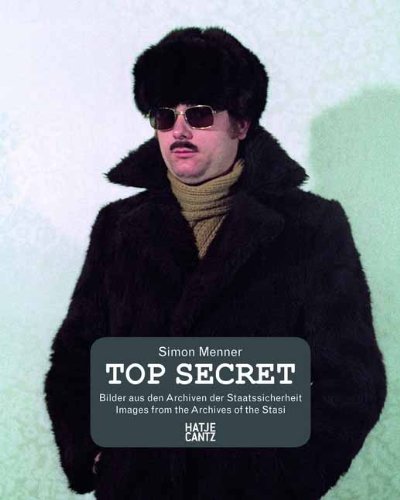