Burke + Norfolk
Already an award-winning photographer of contemporary Afghanistan, Simon Norfolk returned this time to follow the footsteps of a relatively unknown Irish war photographer, John Burke, who had documented the Second Anglo-Afghan War (1878-1880). This immensely engaging book presents the works of both photographers, as well as compelling essays that offer context to this subtle and complex work.
Simon Norfolk’s 2002 book Afghanistan: chronotopia is now recognized as a classic of photography. It established Norfolk’s reputation as one of the leading photographers in the world and has been exhibited at more than thirty venues worldwide.In 2010 Simon Norfolk returned to Afghanistan. This time he followed in the footsteps of the nineteenth century Irish photographer John Burke, a superb, yet virtually unknown, war photographer.

Burke’s eloquent and beautiful photographs of the Second Anglo-Afghan War (1878-1880) provide an extraordinary record. Using unwieldy wet-plate collodion negatives and huge wooden cameras he shot landscapes, battle-fields, archaeological sites, street scenes, portraits of British officers and ethnological group portraits of Afghans in what amounts to a record of an Imperial encounter. The range is tremendously broad, yet suffused with a delicate humanism.

These are also amongst the first ever pictures made in Afghanistan. With this book, one hundred and thirty years too late, John Burke’s time has come at last.Norfolk’s new work looks at what happens when you add half a trillion US war dollars to an impoverished and broken country such as Afghanistan. Very loosely re-photographic in nature, the work is presented as an artistic collaboration between Burke and Norfolk. It features photographs by Burke never before published as well as Norfolk’s new pictures from Kabul and Helmand.

Editor's note: At the time of this article, this work was on exhibit at the Tate Modern in London, and it won a World Press Photo Award, too. It is highly unusual for a single body of work to be lauded by both the fine art world and praised by the toughest critics in documentary photojournalism.

Here is an engaging short video about this project: 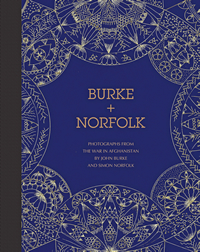 
A dumping ground for an abandoned Russian-era bomber that has now been incorporated into the car park of Shamshad TV, a new media company supported heavily by American money. © Simon Norfolk.
The Sham-e-Paris (Parisian Evenings) wedding hall in the Taymani neighbourhood. Common in Pakistan, these huge wedding complexes have sprung up all over Kabul with dining and entertainment halls to seat a thousand on each floor and even an on-site honeymoon hotel. © Simon Norfolk.
"Attock from Khyrabad." © John Burke. This picture of the military bridge across the Indus appeared in Burkes Afghan albums but was actually shot in 1863 during the Ambela Campaign. It is signed by William Baker to whom Burke was apprenticed, but its inclusion in the folio suggests Burke may have made the picture himself (in Bakers employment) or been present assisting Baker, learning his trade.
"Timur Shahs Mosque." © John Burke.
Jaw Aka Faizal Nahman and his daughter Nono from Bamiyan province, now living in an improvised plastic shelter in the ruined gardens of Darulaman Palace. Built in the 1920s to house an Afghan parliament, Darul Aman translates as abode of peace.© Simon Norfolk.
Yards supplying construction materials in the Nawabadi Guzargah district of Kabul, overlooked by American-controlled electronic eavesdropping equipment on the summit of Kohe Asmai. © Simon Norfolk.
Historically, Kuchis were strongly pro-Taliban; feelings made more intense by being bombed by NATO off their traditional grazing lands in Helmand. They are allowed to set up camp here on Kabuls periphery only because it is below a large, new Afghan Army base. © Simon Norfolk.
"Cabul. West End Sherpur. Winter." © John Burke
A Shia cemetery on the flanks of Kohe Asmai. © Simon Norfolk.
"Landholders and Labourers." © John Burke.
A de-mining team from the Mine Detection Centre in Kabul with a member of the German Police who is mentoring them. © Simon Norfolk.
Before dawn, construction workers warm themselves over burning plastic and cardboard before beginning the job of attempting to get hired for a days work. © Simon Norfolk.
Entrance to the vast City Star Hall complex of wedding halls, on the new bypass out near Kabul Airport. © Simon Norfolk.
Security lights and communications antennae at Camp Leatherneck. © Simon Norfolk.
A security guards booth at the newly restored Ikhtiaruddin citadel, Herat. © Simon Norfolk.
Watchtowers on the perimeter of Camp Bastion. © Simon Norfolk.
One of the huge logistics compounds at Camp Leatherneck. A modern, technologised army needs hundreds of thousands of different kinds of objects in order to keep it working. A $100m warplane can be grounded for the want of a $1 part. Supplying these things is a huge drain on an armys resources and its greatest vulnerability. © Simon Norfolk.
"Durbar in Sherpur Cantonments." © John Burke. A thin crowd of onlookers watches a British ceremonial display before a tent crowded with dignitaries.
Afghan police trainees being taken to the firing ranges by US Marines, Camp Leatherneck, Helmand. © Simon Norfolk.
The future leadership of the Afghan Air Force with Major Jason A. Church of the US Marines who is training and funding them. © Simon Norfolk.