Diorama City Maps
A fascinating interview with Sohei Nishino, a brilliant and obsessive artist who creates composite images of cities using over 10,000 35mm prints at a time! 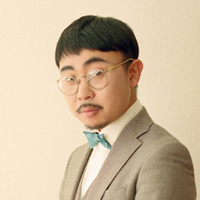 If anything, we are over-mapped today. Anyone with a screen can, in a matter of seconds, hone in on a country, a city, a street, a house, a doorway. It’s magic of a kind, I suppose, but then why does it so quickly wear off? Where is the wonder we feel when looking at medieval maps, when cartographers felt justified in filling terra incognita with imaginary islands and two headed-men?…Nishino’s giddy maps remind us that cities, for all their giddy chaos, are at the core, miraculous human achievements.

Rapid cultural and economic development has unleashed a process of amplification and accumulation within cities. I walk through cities, camera in hand, capturing fragmentary views, some from above, some from below, that I then combine, one by one, in accordance with my memories, arranging them into a map that portrays all the singular aspects of the place. The result is quite different from the denotative expression of a map; it uses photographs (single 35mm frames) of concrete objects or shapes as units to recreate a geographical representation, expressing the city through human memories and images.

This means that the finished work is anything but an accurate map, it is simply the town as seen through the eyes of a single individual, an embodiment of my awareness, a microcosm of the life and energy that comprises the city. ‘Movement’ is always an important element in my ‘Diorama Map’ series. I come into contact with the subjects while moving en route to a certain place, and it is through these physical experiences that the work is created.

At the same time, by superimposing my own photographic activities on a map, it provides me with an opportunity to see the way in which I perceive the world that spreads out before my eyes. The creation of this work involved numerous processes, but all of them, down to the finest details, were carried out by hand, and for me, they can be said to form a part of my journey. I say this because I want to imbue the process of completing it with meaning, and consider the act of its creation, the act of traveling to the subject and using my own experiences of it, to be a search of my inner being. One of the questions I have had since I first began photography was not so much ‘what can I achieve through photography?’ as ‘what can I become through photography?’ and this is something that I have held dear as I carry out my work.

In most cases, too much knowledge demystifies art, making it seem less impressive than on first appearance. In Sohei Nishino’s case, the opposite seems true—the more one finds out, the more amazing and unbelievable his city maps become.

For example: when Henri Cartier-Bresson said, “Your first 10,000 photographs are your worst,” he had clearly not met Sohei Nishino. To produce just one city map, Nishino takes no less than 10,000 photographs—and then uses almost every single one in the final image.

For the past 10 years, Nishino has traveled the world producing these incredibly time/labor-intensive projects. He has created 16 cities so far, the most recent being Amsterdam.

Assistant editor Alexander Strecker visited Nishino’s exhibition at the UNSEEN Photo Fair in Amsterdam and had the chance to sit down and find out more about the photographer’s work and inspirations.

LC: How did you first become interested in photography?

I was always fascinated by drawing because my grandfather was an artist. Of course, a photograph is like drawing with the sun.

In high school, I went on a journey, a kind of pilgrimage, really. I only took a sleeping bag and a camera borrowed from my mother. During the journey, I walked many miles each day and also took many photographs. When I think back, I realize that this was a pivotal experience for me: it was the moment that I fell in love with walking and photographing.

Since then, walking has been fundamental to everything I do. When I walk, my head always becomes more clear—the distractions fall away and I can focus on ideas. Photography is much the same. First comes walking, then photography—and both of these things always come before words. 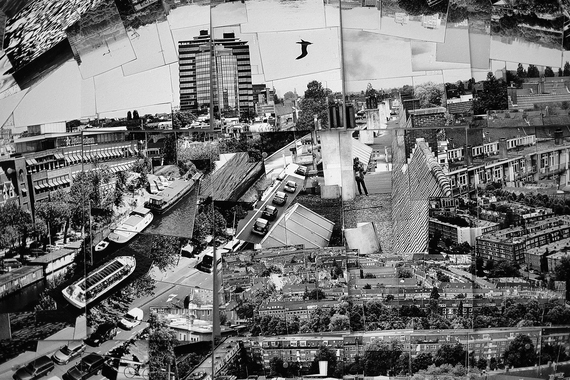 LC: What inspired you to make the first diorama map?

After my pilgrimage, I decided to attend university and study photography. But after beginning the course of study, I didn’t feel sure I wanted to continue. To help with my confusion, I went for many walks. Since I was studying in Tokyo, I would seek out the tallest building nearby, in order to give myself some perspective on where I was going. When I climbed these rooftops, I particularly enjoyed gazing down on the city below. These moments gave me a measure of peace and relief. From so high, I could see myself and my place in the world. I could also follow the paths that I had walked and reconstruct my route. The heights became essential in allowing me to reflect on who I was and where I had come from.

From there, it was natural for me to start photographing from high points. I began by making a series of postcard-sized photographs, shot from these vantage points. Sometimes I would combine these together. I would always emphasize the footpaths and roads in these early compositions.

LC: What is your process like today, with your 16 th map?

As soon as I arrive in a new city, I go to the highest point to command a view of the city. Then I start walking every day, every single day, with a local map in hand. Sometimes I walk with local people, sometimes I walk alone. I always allow chance and coincidence to play a big role and shape my experience with the city and its inhabitants.

Once I’ve started working, I keep going intuitively. I don’t have a final image in mind. There is very little selection or editing that goes into my process, since I try to use every single photograph I take in the final image.

This process can produce some unexpected results. For example, sometimes I overlook a landmark or square or certain area of the city. In those cases, the place simply becomes smaller on the map, or crowded out by the adjoining images. In this way, the map truly represents my understanding and experience of the city. The map becomes a record of my memory rather than an objective standard. 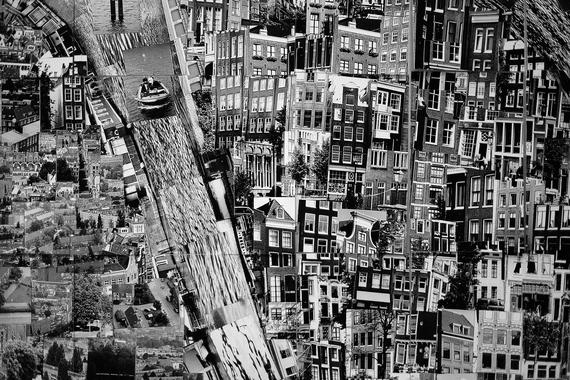 LC: Has your process changed since the project began, 10 years ago?

In general, my process has not changed very much over time. But my photographic approach certainly has. In the past, I remained quite distant from my subjects (as you might expect, given that I began from so high up). Over time, I grew more comfortable getting close to people, mixing in portraits and snapshots and street photographs into the more architectural shots. Now, I feel a strong desire to implicate myself with the life on the ground and understand all the different parts that make up cities.

The difference in my approach is particularly clear in my New Tokyo Map. This map was produced in Tokyo ten years after I made my first map there. When I had finished the second map, I saw how besides having a portrait of the city’s changes, I also had a fascinating look into myself. Re-photographing Tokyo was a great experience and I hope to re-shoot many of my subjects after 10 years to see how they (and I) change.

Today, I see architecture as a part of human life, an organic part of the human being, not simply a collection of concrete structures. I love the energy of cities, the diversity, the density. That being said, I could also imagine shooting tribe people and other small communities, to understand alternative forms of co-habitation. Truth be told, I want to make a map of the whole world. Maybe one day I’ll have to go up into space?

I enjoy film. It feels right to me. I think that the physicality of the medium is well suited to accompanying the physicality of my process (that is, walking). The combination of the two is what allows me to connect to my memory with the experience so directly.

That being said, processing all of my film is certainly the worst part of producing each city map. I love the walking, hate the film processing. Nothing’s perfect I suppose.

The Amsterdam map had a particularly strong aspect of community because the 10,000-image map was split up into 1,100 smaller squares. Each square was sold in blocks of 10, thus dividing the map between 110 different individuals. In the future, I imagine that the people could bring their 10 prints together and recreate the map again. This beautifully represents the way that cities bring people together—before they split up again. 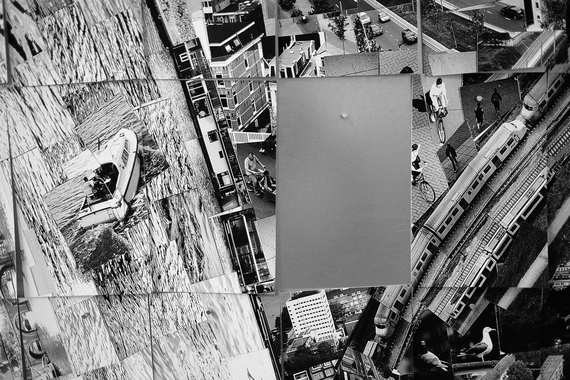 LC: Is it challenging to work on the same project for so long?

Yes, certainly. Sometimes I find it very hard to keep my focus since I’m working on a single project for several months at a time. That being said, I still enjoy traveling and meeting new people. I still relish the process of discovery that greets me every day when I walk the streets with my camera. If I ever feel doubt, I simply try to remember that same sense of peace and discovery that I found walking on that pilgrimage route so many years ago—and look for it again on the routes I take today.

Don’t miss this behind the scenes, making-of video from Goliga , the experimental photography publisher.