Book review
Bowie: Portraits of and Behind the Icon
David Bowie was a man of many, many faces—but the power of still photography is its ability to penetrate and capture authentic, singular moments. These vintage portraits immortalize this musical genius in the throes of creative exploration.

Bowie: Portraits of and Behind the Icon
David Bowie was a man of many, many faces—but the power of still photography is its ability to penetrate and capture authentic, singular moments. These vintage portraits immortalize this musical genius in the throes of creative exploration.

I’m not a prophet or a stone aged man, just a mortal with potential of a superman. I’m living on.

In 1974, David Bowie was at the apex of his career, having already slipped into the skin of Ziggy Stardust and Aladdin Sane. The artist had climbed to the height of superstardom thanks to his musical contributions—but as well for having challenged many rigid social conceptions on fashion, gender and sexuality. On an unassuming afternoon in that momentous year, Steve Schapiro, an American photographer, received his first opportunity to shoot Bowie in an L.A. studio.

Schapiro had already seen more than the average eye. The photographer witnessed and captured key historical moments of the Civil Rights Movement in the 1960s, including the March on Washington and the Selma to Montgomery March. Schapiro was also a unit stills photographer for movies The Godfather, Taxi Driver and Chinatown.

But it was with this work, capturing this unique figure of modern celebrity culture at a particular moment, that Schapiro struck a chord. Now, nearly four decades later, the photographer is finally publishing the extensive collection of images he captured of this enigmatic, and much beloved, figure.

The photobook, titled “Bowie: Photographs by Steve Schapiro,” showcases an intimate and personal account of David Bowie between 1974 to 1987. This photobook features never-before seen images of Bowie at his most creative and self-inspired. These photographs expose the collaborative efforts of Schapiro and Bowie during photoshoots, where they experimented with ideas that would inspire Bowie’s next musical and artistic ventures.

Having photographed many renowned figures—such as Robert Di Niro, Mohammed Ali and Robert Kennedy—Schapiro explained that Bowie was one of the easiest people he ever shot. As compared to other kinds of celebrities, actors for example, Schapiro explained how Bowie was particularly appealing as a subject. Actors, as artists, must build their characters internally as well as externally, so they can become that character while on film. But these same people, when confronted by the still photograph, are forced to project their own, true persona. It’s at that moment that they realize they don’t know who they are.

Bowie, meanwhile, always had a strong sense of who he was, despite his ever-shifting performances. Although he played a wide cast of characters, he knew how to discern the different identities he carried and dig deep into himself when he needed to.

In the words of Schapiro, “This is a personal account of who Bowie was as a person…At the time, he was already a very well-known artist, a major talent. But on meeting Bowie, he was a different image from what I had made of him…He came dressed normally and was very calm, intelligent, relaxed. No groupies, or cases of beer or anything like that. He was quiet in the way he spoke and focused on what the photoshoot would be about

“Nothing in this shoot was prepared in advance…All the ideas were really Bowie’s. He was a person of great confidence, really great confidence in himself, and he would come up with new ideas constantly. One of the reasons for this shoot was to try out different ideas and personas he might develop in performance or music. He brought along costumes to try out. He had specific ideas of what he wanted to do in each session. My responsibility was to fortify this and bring David’s imagination into the light of day.

“When I photograph someone, I try to be on their wavelength. With Bowie, I really tried to work with him…[it was] a collaboration said or unsaid, consciously or unconsciously. [I was] both trying to work out the images that are iconic…[and] give a strong sense of the person and spirit of the event. You’re always doing that, and that certainly was true with David. I tried to project him in the best possible way—whether in character or as the person that he was.” 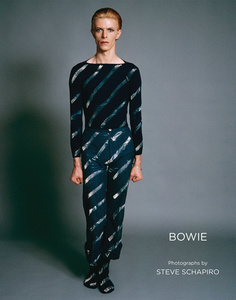