Interview
Soldier
Who are the men and women who volunteer to fight in America’s wars, and what do they look like after their first tours of duty? Photographer Suzanne Opton provides some uncomfortably intimate portraits, and tells her story about this controversial work in an exclusive audio interview with...
Photographs by Suzanne Opton
View Images

Soldier
Who are the men and women who volunteer to fight in America&#8217;s wars, and what do they look like after their first tours of duty? Photographer Suzanne Opton provides some uncomfortably intimate portraits, and tells her story about this controversial work in an exclusive audio interview with Lens Culture. 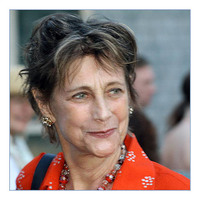 Suzanne Opton
Suzanne Opton, a photographer based in New York, has created a series of intimate and disturbing portraits of young American soldiers who had recently returned from wars in Iraq or Afghanistan (or both), and who were scheduled to return again to war after a brief stint of more training at an Army base in the United States.

The portraits were made at an Army base, using a very unconventional pose, in a close-up manner. Opton asked each soldier to put his or her head down on a hard table, facing sideways toward the camera. She asked them to remain still while she made the photograph. No further words or directions were exchanged between photographer and subject. As the photographer silently fiddled with her large 4 x 5 camera, adjusting the focus, moving the lights, taking her time, the soldiers tended to let down their guard and get lost in the noise of their own thoughts and memories. She waited for that kind of unguarded moment to capture her picture.

The portraits are stripped down, raw, and revealing. Except for the haircuts, there is nothing in the photographs to suggest that these people are soldiers. We see no uniforms or medals or guns or camouflage. Instead we see large disembodied heads, and the intimate details of faces of very young people who look stunned or numb.

Another thing that is disquieting about these portraits is that we rarely personally see people in positions like these, close up, unless we are in bed with them, side by side, heads resting on a pillow. So, we are forced into an uncomfortably intimate proximity with someone who appears to be traumatized. It is hard to shake that feeling.

Opton embarked on other approaches, as well, for her Soldier series. The follow-up approach continues to focus on the heads and faces of soldiers close-up, but instead of alone, the heads are being held by a wife, a girlfriend, or even another soldier. There is an unspoken attempt to comfort and protect in these poses, but more often than not, the faces of the soldiers seem distant and faraway.

The caption for each portrait is spare and open to interpretation: we learn only the soldier’s last name, and the number of days he or she had spent in action at the time of the photograph.

An exhibition of this work has begun touring the United States and beyond. In conjunction with an exhibition in New York, a non-profit organization decided to place the images on billboards along highways and in towns. The headlines of the billboards said simply: Soldier.

Opton was amazed at how powerful the resulting images were. She said, “When they were printed big, they looked like the heads of  fallen statues.”

Listen to Suzanne Opton talking about this project in this 10-1/2 minute audio interview. 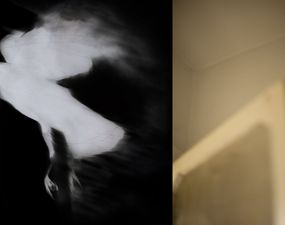 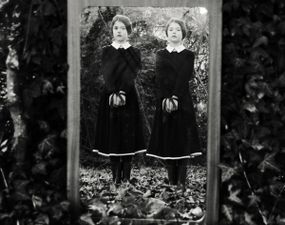 A Child is Playing
Dara Scully
Dark pictures from inside the menacing imagination of a troubled young girl — Hello Stanley Kubrick and David Lynch! 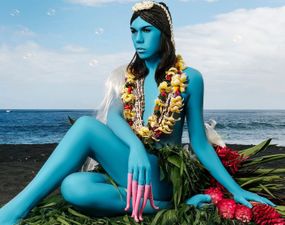 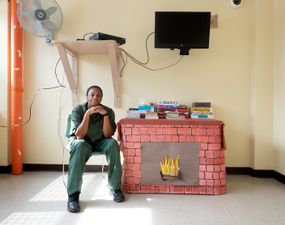 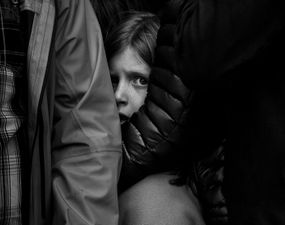 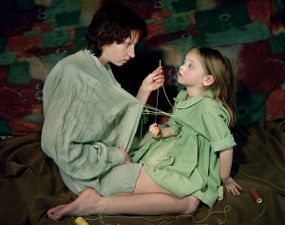