Award winner
Comfort Zone
On the beach, we forget ourselves, exhibiting little of the self-consciousness that usually marks our being in the public space. What if we could carry on so blissfully in the rest of our daily lives…?

Comfort Zone
On the beach, we forget ourselves, exhibiting little of the self-consciousness that usually marks our being in the public space. What if we could carry on so blissfully in the rest of our daily lives…?

I started this series because I was surprised how a certain place or surrounding can affect people’s behavior. During our everyday life we attempt to hide our deficiencies, both physical and psychological. However, once we find ourselves on a beach, we forget about everything and start acting in an absolutely different manner. Is that because everyone else around us is doing the same? If yes, I would love to see those same rules were beyond the borders of the beach.

These photos are not staged and people did not suspect that they were photographed by me. I chose to capture images of sleeping vacationers because it accurately represents the name of the project, “Comfort Zone.” It is only about the seaside, sunbathing, and holiday somnolence that is free from the usual surrounding world.

LC: Your series “Comfort Zone” captures people when their guard is down…your artist statement mentions that “These photos are not staged and people did not suspect that they were photographed by me.” What are your thoughts on street photography and preserving privacy? Are there any barriers?

No one noticed that I was taking these pictures, which was one of my goals. I was trying to avoid any confrontation with people. I also wanted to keep these images as natural as possible and asking for permission would have changed the whole concept and the final result.

After all, you have a right to take pictures in public places. Maybe not all people know that, which is why I try to focus more on doing my work than being a public educator. I also think to myself: a picture is a frozen moment in a public place, where thousands of people could have seen you with their own eyes. It was your own decision to “showcase” yourself for an “audience” of strangers—so what’s the difference if I take a photograph?

Of course, sometimes I was stopped by strangers and I really did have to explain myself. My usual response was that I was taking pictures of nature—I wasn’t lying; people are part of nature.

LC: It seems as if you are hovering above your subjects 20 feet high in the air — how did you technically manage to make these photos? Did you use a ladder, or a drone, or a camera on a long pole?

Can you imagine me sneaking around a beach with a ladder? I was thinking about using a helicopter or a drone, but then I remembered that the simplest solutions are the most genius—just holding a very long pole with a camera on top of it. While prowling the beach, I put this pole on my shoulders and pretended to be taking pictures of the ground. I guess it worked… 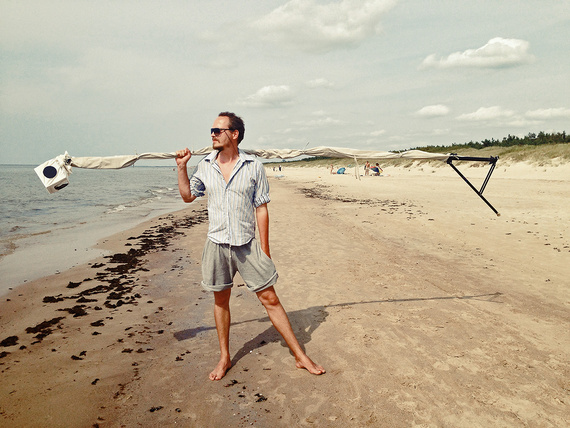 LC: One thing that’s great about these photos is the lack of clutter in the background. The high angle point-of-view helps to make every photo in the series feel like part of a well-reasoned whole—how did you decide on this approach?

Once I had my idea, I knew exactly how my shots would look even before taking the picture. I knew I had to make them from a perfect 90 degree angle; I knew there needed to be perfect natural light; and I knew that I wanted to capture people separated from the surrounding world by sand. It seems I achieved my result since many people don’t believe that these are real people (and not staged).

LC: When you made the final selection of images for this series, what qualities were you seeking? What made some photos “keepers”?

I wanted each photo to be unique and to tell a different story. Also, each one had to meet my quality standards. Sure, I took some more interesting shots, but the angle wasn’t perfect, or the person wasn’t sleeping. Unless I had it just right, it wasn’t for me.

Tadas Černiauskas is one of the 50 best emerging photographers for 2015, as named in the LensCulture Emerging Talent Awards. He was also one of the eight “jurors’ picks.” Discover the other 49 photographers’ award-winning work!