Book review
An Invisible Immediate Love
Digging deep into their archives, the Photography Staff at The New York Times piece together a selection of famous and forgotten images in a new photobook, encapsulating the inimitable atmosphere of New York City through photography.

An Invisible Immediate Love
Digging deep into their archives, the Photography Staff at The New York Times piece together a selection of famous and forgotten images in a new photobook, encapsulating the inimitable atmosphere of New York City through photography.

We all know the feeling. There’s something electric in the air. It could be the chemistry between two people who have just met but—oh my—it seems like they like each other. It could be suspense in a movie. It could be peering into an oven at some unfinished dish knowing, somehow, this is going to be good.

There is no evidence for any of it. Nothing you can see or taste or smell. It’s ethereal, the place where history and imagination meet. But by God we know it’s true.

Irony and wit and humor all come from the same place. We see one thing, then another, and perceive a connection that goes beyond the expected similarities. This is the place where nostalgia resides. This is where love lives, too.

I am thinking about this type of distance, and the emotions it provokes, because I have on my desk a book called Only in New York. It’s an anthology of photographs taken by the staff of The New York Times, culled from both their archives and current holdings. But it’s not just another collection of New York street shots, not just another collection of New York high or low society, not just another way of looking at the Flatiron Building, the Chrysler Building, the Empire State Building or Radio Music Hall. All of that is in there, yes. But this book does something special.

Only in New York is a wonderful, quirky, poignant, funny and often profound look at New York City. The individual photographs are, of course, wonderful. After all, these are the photographers for The New York Times. The differences between photojournalism, street photography, and fine art are irrelevant here. Every image in the book is a solid piece of work on its own. Imagine the New York City Ballet performing The Nutcracker at Lincoln Center. Imagine the Naked Cowboy, children inside the crown of the Statue of Liberty, Mickey Mantle, Yogi Berra and Casey Stengel at Shea Stadium. Imagine King Kong. Whatever you have imagined, these photos will surprise you. Every one of them catches a moment.

But this book is more than that. It is intentionally a series of diptychs. That’s the thesis here: every photograph has a partner. And in these pairings there is an act of genius. In these pairings, in the distance between them or in ability to hold both images simultaneously in mind, in the contrasts or ironies or contradictions or confirmations, there is a truth about New York.

As David W. Dunlap says in his brief introduction: “When we opened the archive and started laying out the pages for this book, we found that certain pictures had an affinity for one another—regardless of when they were taken or where or by whom. Paradoxically, each photograph came into sharper focus when set into a diptych.

“Wordlessly, the pairings began telling stories of their own.

“They spoke across time. They described a city that exists on many planes simultaneously: energetic and brutal, compassionate and cruel, creative and desperate, eccentric and conformist, impatient and steady, exuberant and serene, tragic and funny, elegant and shabby, cosmopolitan and insular, crowded and lonely.”

If I say this book is wonderful, I mean that literally: this book provokes wonder. Sometimes it’s a simple, “I wonder what happened, how the years got from then to now.” Sometimes it’s the “I never noticed that.” Sometimes it’s the type of wonder we feel when we’re hit by the obvious.Looking at the diptychs, I found myself wondering about the space between them. You know the old phrase: The whole is more than the sum of the parts? That’s never been more true than when looking at this book.

Most photobooks ask the reader (I’m going to use that term instead of the more awkward “viewer,” because I believe we read a photograph) to consider images one at a time. Sometimes we consider the images independently of the others in the collection. Sometimes we’re asked to look at the images as individual steps in some narrative arc. Only in New York creates a different approach. Yes, we consider the individual images, but we do that two at a time. It’s a bit like a chord in music. What we hear is the combination of single notes played at the same time. Or, better yet, like harmony. The joy comes from the combination of difference.

More often than not, this book’s pairings bring out something we may have felt but never articulated. There is that wonderful feeling of “Oh yes, that’s right. I didn’t know I knew that.”

Only in New York is a history lesson, a sociological examination, an architectural appreciation, a tribute to sports stars and celebrities and ordinary people. At times it’s damn funny. At other times it’s heart wrenching. Its real power, though, is in what you feel when holding two things together.

In other words, Only in New York is a love story. 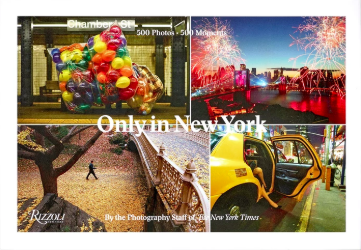 Only in New York

by The Photography Staff of The New York Times