Book review
Disneyfication
In cities around the world, a common trend shows oversize commercial images covering up and colliding with much less glamorous everyday reality.

Photographs and text by Theo Derksen

Disneyfication
In cities around the world, a common trend shows oversize commercial images covering up and colliding with much less glamorous everyday reality.

Theo Derksen’s Disneyfication has been over twenty years in the making. A book of vivid color double-page spreads, it offers a global vision of the oversize invasion of visual imagery in metropolises including Bucharest, Berlin, Egypt, Tokyo, Dubai, Chongqing, Shanghai, Beijing, Singapore and Las Vegas.

A meeting with Jean Baudrillard in 1995 got Derksen started on the project, and the book opens with a quote from the French philosopher: “It is dangerous to unmask images, since they dissimulate that there is nothing behind them.”

We are then, I presume, intended to see the pictures in this book as an unmasking of images. He says all his photographs are straight, observational pictures, but each acknowledge the ways in which so much of the world is now made up of montages and collisions between the alluring spectacle of commercial images and their settings.

As well as Baudrillard, whose own photography was fascinated with trompe l’oeil, Luigi Ghirri and Martin Parr are also relevant—Ghirri with his wry response to consumer culture’s pervasiveness and Parr’s more abrasive depictions of people caught amidst image clichés. However, Derksen’s is a response to the greater intensification of the image world in urban spaces, the digital-borne ubiquity and proliferation of images that now can be reproduced on almost everything.

A photograph from Cairo, for example, shows the back-end of a tourist coach, adorned with a flashy montage of pictures advertising the country’s attractions, against the foreground detail of the flaking grey-painted surface of a kiosk structure. It typifies the kind of formal collisions running through these pictures, the way in which hyped-up promotional appeal jars and collides with a situation and context that is dull and grey by comparison. The Cairo picture is however given another dimension and visual complication by the fact the image of one of the Pyramids on the coach is also grey as it is drained of color for contrast against the other colorful tourist images.

These digital globally-widespread images often have a material presence in Derksen’s photographs. Their surfaces are not untouched or seamless, but are often shown marked, damaged, peeled back, broken up. City dwellers crop up in the photographs, but are more incidental and inactive, often just going about their business, amidst the clamoring signage. In a photograph from Chongqing, among a series of facades bearing images that show architectural visions of city development, a solitary man appears to be caught absorbed in removing something from the metallic surface of the one empty screen.

But there are no real signs of resistance or protest to the spectacle in this book. There is the violent graffiti scrawling over an image of a young woman in a picture taken in Bucharest, but this is dislocated from the figure of a man cutting between a car and the advertisement, head bowed. The registration of the social real presents us with people’s dormancy and passivity, a certain obliviousness to the images that now fill their worlds. The action and animation seems to all be in the image world.

Derksen is fascinated in showing us the fractures and disorientating effect of the theme park world of urban spaces, even going as far as to invert a few photographs in the book to further confuse us. But the way in which he photographs people in these cities means they neither compete with nor contest that image world.

In one of the most charged juxtapositions, taken in Dubai, a worker is enmeshed by the cage trolley he is pushing and dwarfed by the image of a woman’s face behind him. Setting up a fantasy of sexual enslavement, the woman in the huge ad is adorned and eroticized with decorative chains, one of which suggestively runs through her mouth. All this is played out against the implied subservience and entrapment of the worker. The image spectacle is not undone or unmasked here, instead Derksen’s photograph shows how its allure and spell dominates and binds. 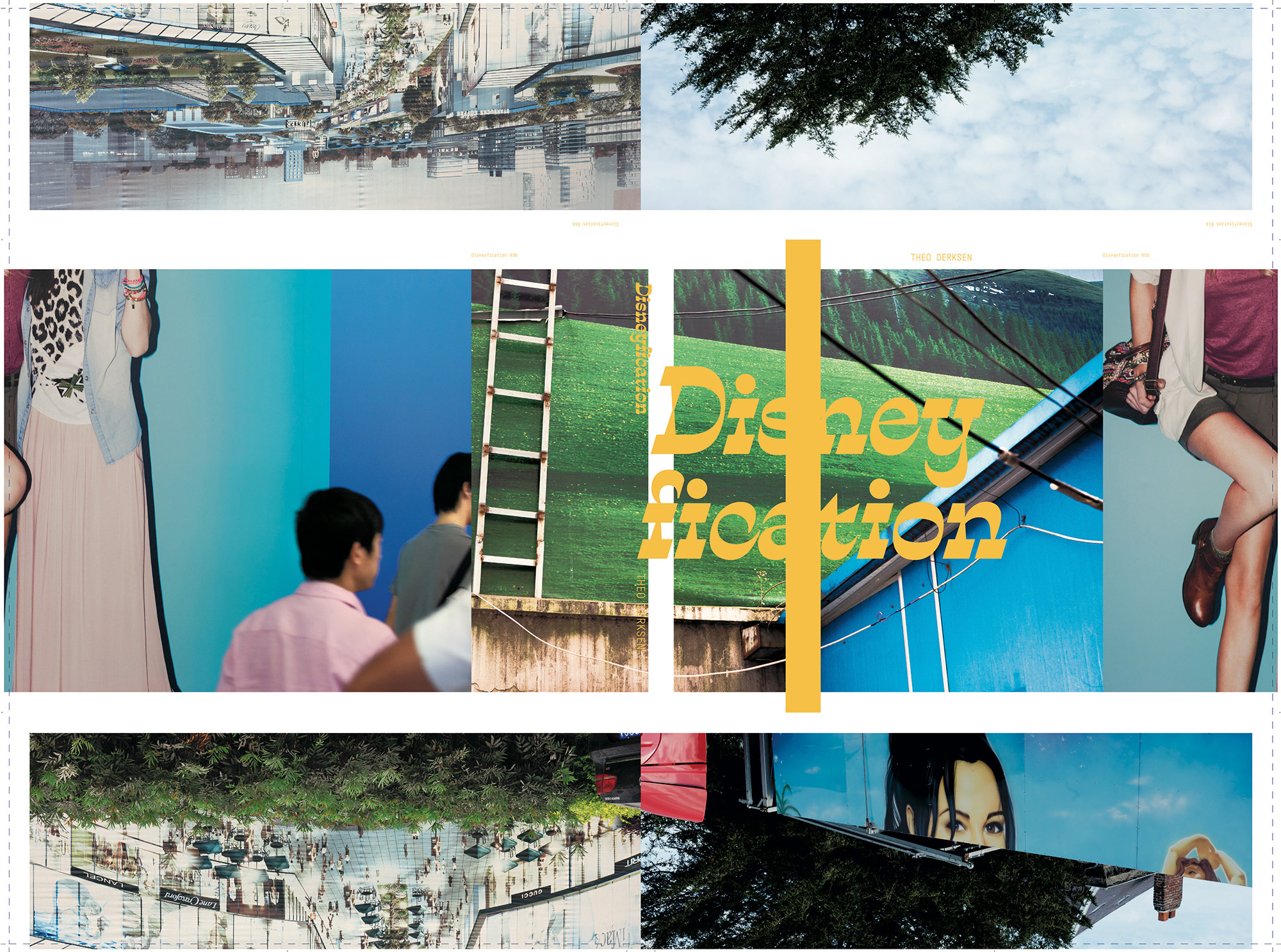