Book review
Studio 54
Caught in brilliant flash after flash — the 1978-80’s hedonistic decadence of the rich, beautiful and glamorous posers and actors who claimed this famed nightclub as their playground and parade ground.

Photographs and text by Tod Papageorge

Studio 54
Caught in brilliant flash after flash — the 1978-80’s hedonistic decadence of the rich, beautiful and glamorous posers and actors who claimed this famed nightclub as their playground and parade ground.

The 66 photographs in this book were made between 1978–80 in Studio 54, a New York discothèque that, through those years, was the place to be and be seen, as the celebrities, partygoers, and those crazy for dancing who filled it every night were happy to prove.

Unsurprisingly, given its reputation (which quickly flamed into notoriety during a short, 33-month existence), it was difficult to get into: the imperturbable doormen who doled out access as if they were controlling passage into a fabulous kingdom made sure that it would be. Only the famous or socially connected could assume they’d find themselves shooed around the flock of hopeful celebrants milling on the street side of the velvet rope and guided through the door; otherwise, the thing most likely to help was to be beautiful. Once inside, though, everyone there seemed thrilled by the fact, no matter how they’d managed it, an excitement fed by the throbbing music and brilliantly designed interiors, which, on a party night, could suggest anything from Caliban’s cave to a harem.

Apart from the numerical coincidence, it’s worth noting that 54 of these pictures were made in 1978, when I started visiting the club—beginning on January 1st, as New Year’s Eve spilled into dawn—and that all of them were produced with medium-format 6 X 9 cm cameras. My workhorse was a heavy-metal machine originally manufactured by Fujica for Japanese tour guides and their group picture-taking, the predecessor of a relatively light-weight plastic camera that I’d later use for years. This beta version, though, had the feel of a lead brick in my hand, and, worse, came with a gruesomely inaccurate viewfinder which, to correct (but only approximately), required me to shift the camera in two directions after I’d hefted it up and framed a possible picture. Add a sizeable flash, and I was walking around with what, at best, was a dubious photographic outfit.

But I’d been inspired ten years earlier by Brassaï’s 1930s pictures of Parisian nightlife—made with a 6 X 9 cm Voitländer—that I’d seen at the Museum of Modern Art, which left me uninterested in using my smaller 35mm Leicas for this project, not when I hoped to capture something of the actuality of flesh and sweat and desire that I’d recognized in the Hungarian photographer’s work, and imagined that the Fujica (which produced negatives four times the size of the Leica) might help me also achieve. My hope was that, if I could do it, my pictures would own the detail and tonal fullness characteristic of those larger negatives, while being charged by the sense of unfurling energy I’d always tried to tap in my work with the Leica and associated with the small-camera photography I admired.

And so I photographed, trying not to be overwhelmed. After all, I could make only eight exposures with each roll of film before I had to stop and change it, rather than the 36 I counted on with a Leica, a restriction I needed all of my concentration to cope with, given the inherent difficulty of the problem and the distracting, ambient pressure (visual, sensual, sonic) of Studio 54 itself. What helped, and made it possible for me to think I could succeed, was that I’d already had 15 years of using a 35mm camera and gauging the world according to its 1:1.5 frame, the identical shape produced by the Fujica, which allowed me the great advantage of being able to move in the club from the dance floor to the banquettes and bar and up to the balcony while effectively projecting the camera’s frame of view (more or less “imprinted” on my mind’s eye) over the often-astonishing things unfolding in front of me without having to bring an obtrusive machine into play.

Only after I’d fixed on a subject (or sensed it forming) would I lift the camera into view, as the visual disposition of what I was seeing tumbled into place within the imaginary frame I was applying to it. Gesture, action, shape, and even meaning: the problem was to give them all the greatest possible chance to mix toward an inclusive, cohering figuration—or as near as my eye and spirit could sense it—and only then, and quickly (while allowing for the corrective hiccup necessitated by the Fujica’s viewfinder), literally draw it on film in a flash!

35 years on, here are the pictures that came out of those nights. Obviously, they’re more compelling than anything I could say about my method of making them or the cameras I used to do it. Which, of course, is how it should be. They were always meant to speak for themselves, with a persuasiveness distinct from the fact-telling of journalism or the occluded eloquence of “old” photographs. Let’s call it poetic eloquence instead, an expressiveness shaped by the photographer’s sense of form (preconscious and utterly physical) acting on the ether that is his or her intuition reading, reading, reading the world—and, through a camera, fusing with it to sing, or not, on the stage that becomes a picture, one after the next.

As this book demonstrates: a studio of 66 such stages, crowded with players in and out of life (photography’s paradox), running still. Enjoy them, study them, even judge them. For at last they can be judged, now that they’ve finally been brought into the light of day. 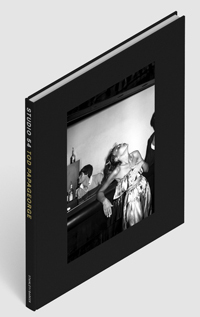