Interview
Do North: Cold Heartbreak on the Road
Years after an ill-fated roadtrip, a photographer looks back on his long-discarded images with fresh eyes and a new perspective on what he really saw.

Do North: Cold Heartbreak on the Road
Years after an ill-fated roadtrip, a photographer looks back on his long-discarded images with fresh eyes and a new perspective on what he really saw. 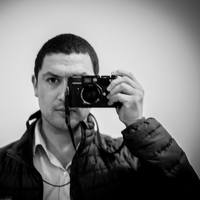 Tomás (Tom) Fernández is a Chilean photojournalist and documentary photographer based in Madrid, Spain. His portfolio offers a collection of far-ranging subject matter: the dislocation of heartbreak, the obsession of a Brazilian bodybuilder, the resilience of those affected by devastating wildfires in his hometown of Valparaiso. His photos—which span the globe—are evidence of an unfulfilled wanderlust.

LensCulture contributing writer Elizabeth Temkin reached out to him to learn more about his work.

LC: One of your more personal series, “Do North,” is a self-described “intimate diary” of time spent in rural Minnesota. Can you tell us more about your inspiration for the subject matter in this collection?

TF: Well, there is something bittersweet about this one. I made this series when I was spending time in the U.S. with an ex-girlfriend. We took a road trip from Minneapolis to this little town called Grand Marais, up in the deep north of Minnesota. More than touristic pictures, what I tried to record was what I was feeling back then: specifically, that I knew my relationship was doomed because of the difficulty of dealing with the long distance (Chile—Seattle). I found myself dealing with these feelings without any of my friends to share my feelings with. I was in a strange cold land, pretending that everything was going well.

After this trip, I did not review these pictures. They were forgotten about in some old hard drive since I didn’t want to deal with them, emotionally. Some months ago, when I arrived to Spain, I was organizing my files and I found the series. Now, three years later, when I see it, I see coldness and broken hearts; memories and lessons; a piece of my past.

LC: How does the monochrome format help to tell this story?

TF: When I took these pictures back in 2012, I did them in color. Then, when I stumbled upon them a few years later, I thought, “I don’t want to see this.” But something made me pay attention to the picture of the storm in a forest, with white and snow. I turned that into black-and-white and boom, it all made sense for me. Some stories just can’t be told in monochrome because the lack of color doesn’t transmit all of the emotion or the light. But this one—it’s like a memory. Memories and emotions, those are easier to transmit in black-and-white.

TF: In my opinion, documentary photography does what mass media can’t do because mass media is too busy with the day-by-day deadlines and coverage. Namely, documentary photography allows the photographer to go deeper in their approach and create something more personal since the photographer can invest more time and reflection in order to create a visual product with an identity. Something less disposable, with different influences beyond photojournalism: more artistic, introspective, contemporary, you name it.

A great advantage of photography over stand-alone reporting is that you don’t need to know the language; you don’t even need to know how to read to be moved by a photograph. I think that photography, unlike other forms of visual expression, has a capacity to portray emotion in a simple, naked, and honest way.

LC: A feeling of otherness is recurrent in your work. Do you see it as influenced by your (Chilean) family’s legacy of political exile?

TF: For me, more than the fact of the exile itself, is that I have been raised with a clear political conscience against Pinochet (in other words, anti-fascist). That is a part of my statement as a human being. When I am dealing with photographic topics/subjects that touch on social issues, the values I was raised with always lead me to take the side of those being deprived or with the people that are suffering.

LC: How does your previous work as a photojournalist influence your approach to contemporary photography?

TF: I like that contemporary photography provides me with a wider range of artistic resources and allows me to play with metaphoric interpretation. My aim is to bring photographs to a higher level of sensation as well as to convey something less immediately evident. My jounalistic work is always grounded in reality, but contemporary photography gives me the tools to enrich my narratives.

LC: What advice do you have for young photographers?

The world is full of images, and at this point, a nice picture is not enough. A photographer must make a statement and share it in the shape of their photographs.